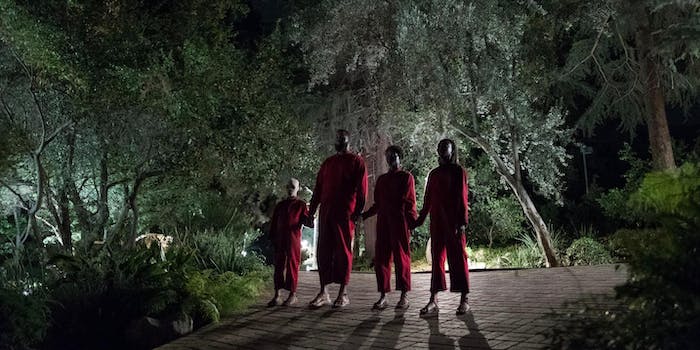 Exclusive: Jordan Peele looks at a major cinematic influence behind ‘Us’

It's a horror movie staple.

You can see the horror films that influenced Jordan Peele when making Us both on the surface and deeply embedded within the fabric of the film. And while some are more apparent than others, Peele pointed to one film in particular that helped shape Us’ message.

In a new clip that’s included as a special feature on Peele’s brand of horror on the Us Blu-ray, Peele points to George Romero’s Night of the Living Dead as an influence of his—particularly in the way it conveys a bigger message.

“I think one of the great films that carried a powerful social message is Night of the Living Dead, and that movie was about race even though they don’t really talk about race in the film,” Peele explained. “I wanted to sort of follow that approach with this movie.”

Peele has nodded to Romero’s influences on Us previously, noting that he “wanted to make something that meant more than met the eye, where the commentary and the message is something that requires you to dig and talk about it.”

But for Peele, the biggest horror aspects of what he includes in his films are the things that scare him the most. It’s the idea, as Lupita Nyong’o explained, that the monster we fear is “within ourselves.”

“I tend to draw inspiration from my own fear,” Peele said. “At some point, I asked myself, ‘What’s the scariest thing for me personally?’ In this case, it was the idea of seeing myself. Then I think about what that’s about: why is seeing yourself so scary?”

Us is available to rent or buy digitally and will be released on Blu-ray, DVD, and 4K Ultra HD on June 18.