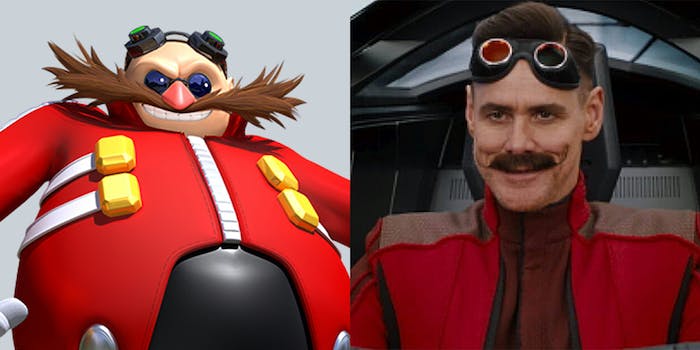 Eggman seems to have lost some weight.

The first image of Jim Carrey as Dr. Robotnik in the upcoming Sonic the Hedgehog live-action movie has leaked, and like any lifelong fans of a furry blue dude with attitude, the internet has opinions.

The leaked image comes via @SEGAbits, a fan-operated SEGA news account. We see Carrey sporting a red jacket, a bushy mustache, and aviator goggles, all while seemingly piloting some sort of machine or aircraft.

Don’t worry, we’re just as confused. Historically, the game and cartoon evil genius known as Dr. Ivo “Eggman” Robotnik has been far more rotund, and Jim Carrey looks positively svelte. Typically, he also has a shiny bald head, but Carrey is sporting a nicely groomed head of hair. The same @SEGAbits account also posted a picture of Carrey allegedly from his Instagram (although Daily Dot was unable to find this exact image) showing Carrey’s haircut, which matches the leaked image.

Here is Jim’s haircut he posted on Instagram, citing it was for the role of Robotnik. This cut matches the rumored trailer image. pic.twitter.com/LmFDZFsvT7

Birth.Movies.Death editor Scott Wampler later confirmed the image, noting he had seen it in a privately revealed trailer during CinemaCon earlier this month. Wampler described the character as “late 90’s Jim Carrey mode,” which puts him right around The Truman Show and The Cable Guy.

Can confirm that's real. We saw two trailers at CinemaCon, one which was entirely focused on Carrey as Robotnik. He's playing the character in what I would describe as "late 90's Jim Carrey mode". https://t.co/t0HHJzy43s

Of course, the internet couldn’t let this go without a few quotable reactions. First off, the comparisons of Carrey’s Robotnik to other infamously evil geniuses:

Jim Carrey Robotnik looks like he and his wife trawl Tinder in search of "a third troubador to join us for schnapps and decadence in our Steampunk Boudoir" pic.twitter.com/ry4He21utv

Robotnik from the upcoming live-action Sonic the Hedgehog movie looks like a steampunk sex offender. pic.twitter.com/o33UpXEY5k

Plenty of folks think Carrey’s Robotnik will take a turn for the worse at some point in the film, and perhaps grow a belly and lose all his hair.

I get the feeling that Jim Carrey's version of Eggman/Robotnik is going to gain some weight and lose his hair in the inevitable end credits scene. pic.twitter.com/K1M6zXAP5u

According to @SEGAbits, a trailer for Sonic the Hedgehog will drop on Tuesday, and you can bet we’ll be there to watch it. Lord let there be enough Chaos Emeralds to make this movie good.