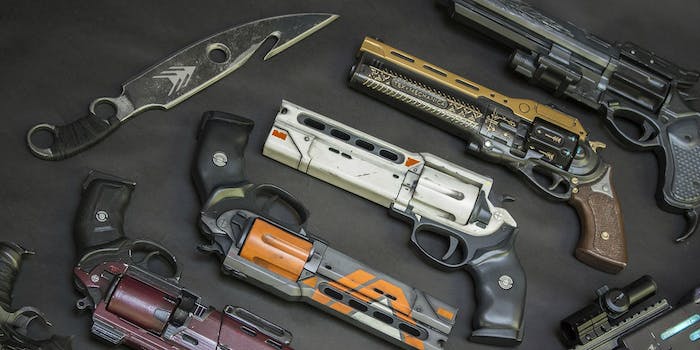 You can have a RL version of any Destiny gun you want, for a price.

Destiny fans love their guns so much that they’ll pay hundreds or thousands of dollars to see their beloved weapons recreated in the real world.

Eric Newgard, 21, from California and Brad Thompson, 23, from Texas are the proprietors of Impact Props, and they are more than happy to take Destiny fans’ money for near-perfect prop replicas of Thorn, The Last Word, or the most famous Destiny weapon of all, the dreaded and beloved Gjallarhorn.

“I have a particular fan who has purchased every Destiny replica I have ever made available,” Newgard told The Daily Dot via email, “and he asked me about [the Gjallarhorn replica] just when I had decided that the Gjally was taking up too much space in my house. I knew that it would be going to a good home so I let it go for a little under $3,000.” 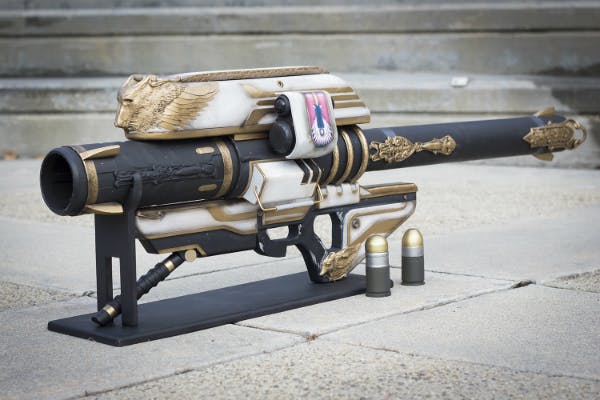 A replica of the dreaded rocket launcher Gjallarhorn, and two of its powerful Wolfpack rounds, from Destiny.

While decidedly a science-fiction game, Destiny also has a flavor of fantasy to its lore and aesthetics. Players take the role of Guardians, raised from the grave and endowed with unearthly power to defend the descendants of the handful of survivors that escaped an apocalyptic war centuries ago.

Enemies in Destiny bear names lifted wholesale from fantasy films and games, like “goblin” and “minotaur,” “acolyte” and “wizard,” and some of the weapons wielded by Guardians bear unique names and have detailed backstories, like Bilbo Baggins’s sword Sting in Lord of the Rings, or King Arthur’s blade Excalibur, or Mjölnir, the hammer of Thor.

Destiny has dozens of these named weapons, each of which may be an excellent candidate for an Impact Props replica. 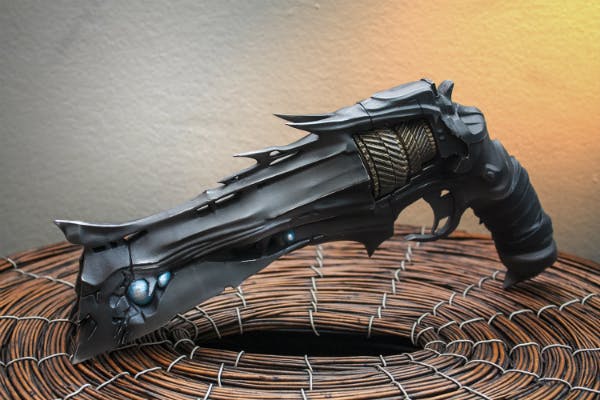 The feared and despised hand cannon, Thorn, from Destiny.

Veteran Destiny players know intimately weapons like the feared and despised Thorn, a hand-cannon pistol that infects its enemies with poison. Players have to pass through many trials in order to earn the right to carry Thorn at their side.

Newgard will sell you a Thorn replica on Etsy for $435. You can find other 3D-printed Thorn replicas on eBay for almost a third of the price, but the craftsmanship on the lower-priced Thorn replicas is not even close to what Newgard and Thompson offer with their work.

Impact Props is a full-time gig for Newgard, who previously built props and costumes as a hobby while studying winemaking at the University of California, Davis. Thompson is a mechanical engineering student at the University of Oklahoma, and builds props and makes promotional videos when he can find the time for the hobbies.

Newgard was led to prop making in high school via creating weapons for Live Action Role Play (LARP) games using common materials like duct tape, upholstery foam, and PVC. He also sculpted custom accessories for Lego minifigures, some of which are still on display on Newgard’s Flickr pages. 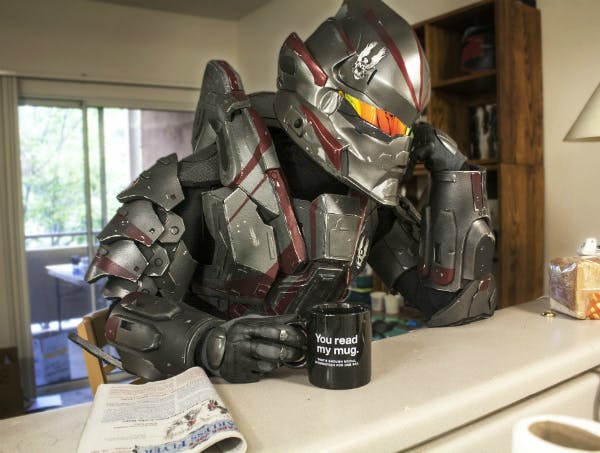 A Spartan super-soldier from Halo, dressed in Hayabusa-style armor, having his morning coffee. Armor via Impact Props.

“I took those hobbies one step further when I was introduced to the 405th,” wrote Newgard. The 405th Infantry Division is to Halo what the 501st Legion is to Star Wars, a group of costume enthusiasts dedicated to building replica clothing and weapons from the Halo universe.

The 405th is one of the venues in which Newgard first ran into Thompson, who started his prop replica efforts by making a replica of the power armor suit worn by Master Chief, the hero of the Halo series, out of trash cans.

“Not the best material to use,” Thompson told The Daily Dot via email, “but I made it work. I was out to prove that I could do it, and I absolutely loved the act of creating something from nothing like that—a prop, helmet, or costume.”

Newgard and Thompson were originally antagonists within the Halo prop replica community. “At first it was a competitive nuisance,” wrote Newgard, “but we eventually began to discuss our projects and methods with each other, which taught me a lot.”

“I actually tried to out-do Eric a number of times, so we ended up making the same things,” wrote Thompson. “The competition made both of us better, and we ended up seeing complementary qualities in each other. I approached Eric out of the blue and pitched that we team up. He agreed and here we are today!” 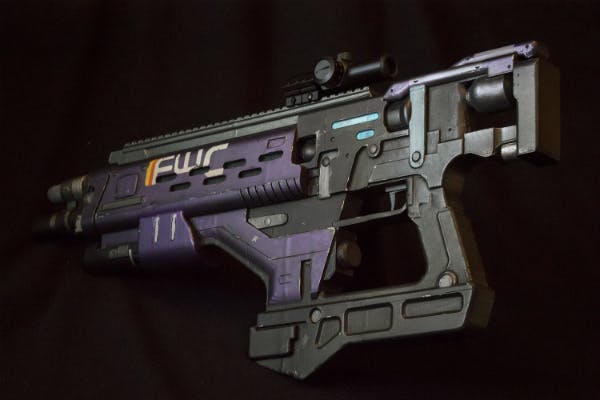 A prop replica of the fusion rifle named The Calming, from Destiny.

“The most captivating thing to me about the Destiny universe is the aesthetics,” wrote Newgard. “If it isn’t a commission, I usually choose to build a prop based on how much I enjoy the design and how unique it is. In the case of the Duke Mk. 44 and The Calming, I found nice digital files online that were readily available for 3d printing and thought they would be good for both practice and my portfolio.”

Living halfway across the country from one another makes collaborating on projects a challenge. Newgard is more comfortable using the rigid materials and chemicals that are common elements for prop construction, while Thompson is more at home using the foam material that is the basic component for pieces of prop armor.

Early in their collaboration, each half of the team would build components that played to their strengths, and then ship those components to one another to assemble into full replica costumes, including a bevy of different Spartan armor suits.

“Now Brad and I can both handle a wide range of materials,” wrote Newgard, “so we build our own props and specialty costumes and get together once in a while to work on a project or create a new video.” Thompson, who owing to his studies has less time for prop fabrication than he used to, has instead turned his attention to being the unofficial entertainment branch for Impact Props, shooting videos that show off the duo’s work.

In addition to selling products on Etsy, Impact Props accepts commissions for custom work. One of Newgard’s recent commissions was to create a Golden Loot Chest for a Red Bull promotion for the Destiny expansion The Taken King, released in September 2015.

I asked Newgard how much it would cost to commission a custom build of one of my favorite weapons in Destiny, the MIDA Multi Tool scout rifle. You can find blueprints for 3D printing a MIDA on Etsy, but no finished products for purchase.

“Custom commissions are never as straightforward as they seem,” wrote Newgard, “because on top of complexity and basic material cost, there is the variability of time, quality, and customer budget. If someone wants to commission a top quality replica in a short amount of time, it will cost more than a high quality replica with a long deadline. Alternatively, if someone with a low end budget needed a prop in a short amount of time, the quality will likely be less than perfect or it will lack functions such as lights or moving parts.”

Not a purchase to be made lightly, but I’m sure the replica would look amazing.