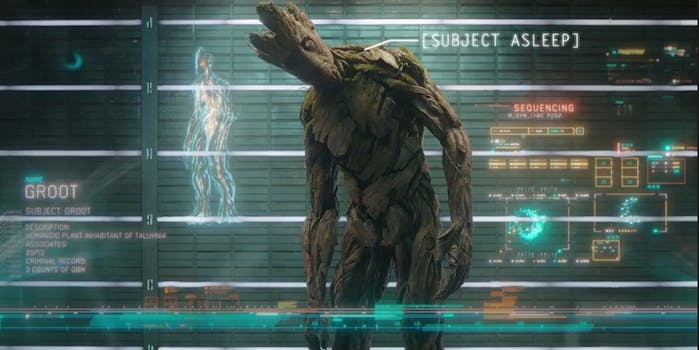 Like ‘Hodor,’ ‘I Am Groot’ is already becoming a loved Internet meme

We do love our limited-vocabulary characters, don't we?

The success of the Marvel Cinematic Universe’s latest entry, Guardians of the Galaxy, has resulted in the spread of the Internet’s latest meme: I Am Groot.

In the movie, “I Am Groot” is the only phrase that strong-yet-sweet tree creature Groot (voiced by Vin Diesel) is capable of saying. As the movie progresses, it becomes clear that only Groot’s pal, Rocket (voiced by Bradley Cooper) is capable of understanding exactly what Groot is trying to convey each time he utters his limited vocabulary.

The hashtag #IAmGroot has seen rising success on Twitter, helping users tag their positive reviews of the film and also comment on pretty much anything.

#WhatILearnedToday You can have a more intelligent conversation with Groot than you can have with most of Congress. #IAmGroot @skiplacombe

This is your reminder that Groot is the newest Disney Prince. #IamGroot #GuardiansOfTheGalaxy #Disney #Marvel

The movie’s popularity has also spawned a great deal of Groot-centric fanart. A parody of the children’s book “The Giving Tree” was recently featured on funnyjunk.com, with Groot standing in for the title character. 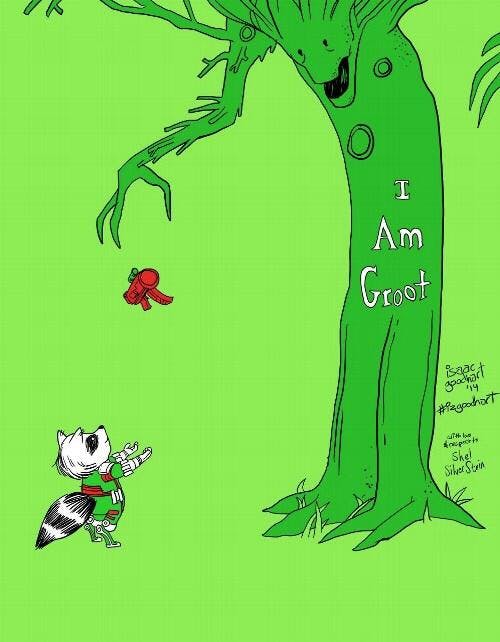 Granted, scenes from the movie itself have popped up all over Tumblr, showing off Groot’s sweet, giving nature. Naturally, a scene featuring a small, dancing Groot in a flowerpot is the most popular.

Groot’s scene-stealing catchphrase is pop culture’s latest example of a single—yet repeated—utterance having many different meanings. We’ve seen the same love with “Hodor” from Game of Thrones, another gentle giant who can only say his own name.

But the practice precedes Guardians of the Galaxy, Game of Thrones, and social media itself by decades. Take, for example, almost every adult in the various Peanuts cartoons. All we’re able to hear is what sounds like a broken trumpet, but somehow, Charlie Brown, Lucy, and friends are able to understand exactly what is being said.

It goes back even further. In the Addams Family movies and TV series, the furball Cousin Itt only spoke in quick squeaks. Yet the Addams clan was able to understand him as clear as day.

Or how about Lassie’s barks constantly meaning everything from “I’m hungry” to “Little Timmy has fallen in the well?”

And let’s not forget Chewbacca.

Since continued success is certainly in the cards for the Guardians of the Galaxy (especially among those who plan to boycott Michael Bay’s version of Teenage Mutant Ninja Turtles this weekend), expect “I Am Groot” to expand its presence everywhere. As for the future of everyone’s favorite walking, talking tree (sorry Treebeard), when asked if he would be featured in next summer’s Avengers: Age of Ultron, Groot replied “I Am Groot.”