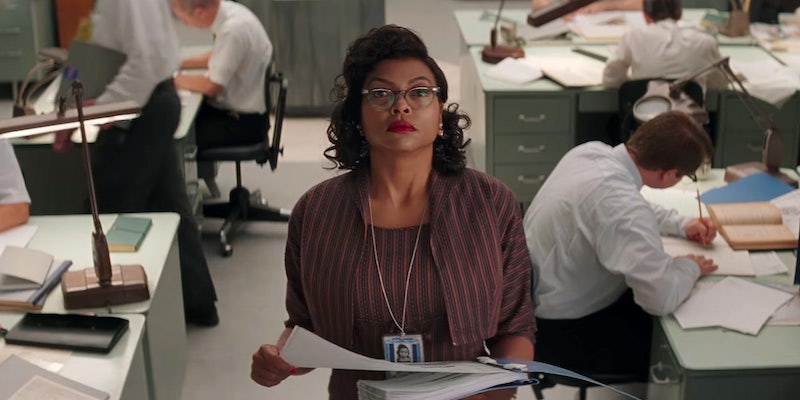 Review: ‘Hidden Figures’ is an unflinching story about the women who battled NASA’s racial divide

Three stars shine in the untold story of the women who helped put John Glenn into orbit.

We’ve always celebrated the people who have pushed the boundaries of what’s possible in space exploration. Now we’re finally paying tribute to the brilliant women behind the scenes at NASA in an inspirational film that doesn’t ignore the harsh realities of the sexism and racism they faced.

Hidden Figures, based on the nonfiction book by Margot Lee Shetterly, pulls the curtain on one of NASA’s untold stories following Katherine Johnson, Dorothy Vaughan, and Mary Jackson, three of the black female human computers at NASA whose work (particularly Johnson’s) put John Glenn into orbit. For the women who worked on the calculations necessary for rocket launches and flight paths before computers were brought to NASA, it was often a thankless role—one that’s only come to light more recently.

Katherine, who’s played wonderfully by Taraji P. Henson, is a brilliant mathematician who’s recruited to help calculate (and check the work of) the numbers for Project Mercury, but not without plenty of pushback in a field dominated by white men. She’s faced with a standoffish superior (Jim Parsons) who resents that his work needs to be checked, an office of colleagues who are horrified when she grabs a cup of coffee from their pot, and a demanding boss in Al Harrison (Kevin Costner)—who’s unaware that she has to travel half a mile just to use the bathroom until he’s confronted with it. She even has to work with outdated numbers because she’s barred from the briefs that determine the new numbers.

While Katherine’s story is front and center, Octavia Spencer and Janelle Monáe are both given plenty to work with as Dorothy Vaughan and Mary Jackson, two of the other women who work alongside Katherine at NASA who face their own barriers. Dorothy is essentially doing the work of a supervisor without the title or pay, and she has learned how to make herself and all of the other human computers essential when the introduction of IBM’s threaten to make their jobs obsolete. Mary wants to become an engineer, but has to go to court to take the classes she needs to make it possible.

Monáe’s portrayal is a particular highlight as she captivates the screen in nearly every scene she appears in, and all three actresses bring vibrant characters to life, especially when they’re interacting with each other. Luke Cage and Moonlight actor Mahershala Ali delights in a smaller role as Katherine’s future husband Jim Johnson.

While the film shows hints of the Civil Rights movement—like archival footage of Martin Luther King, Jr., speaking to the cameras—it focuses more on what Katherine, Dorothy, and Mary faced in and out of the office.

But while Katherine earns the respect of her colleagues, Hidden Figures doesn’t let them become the saviors. Costner’s Harrison knocks down some of those barriers, including desegregating the bathrooms and allowing Katherine to attend briefings, but he’s not given a pat on the back for it. One supervisor’s attempt to vocalize that she doesn’t have an issue with black people doesn’t go unchecked. Despite everything thrown at them in a system that rarely lets women of color succeed, Katherine, Mary, and Dorothy come out on top anyway. In the end, it’s all about the numbers because numbers, Katherine says at one point, don’t lie.

We might already know the end of the film, which tends to feel a bit formulaic at times, but it still sucks us in. It’s a feel-good story that’s every bit worth rooting for.

NASA astronauts, scientists, and engineers have long cited Star Trek as why they were inspired to join the space, but Hidden Figures might do the same for women trying to break into NASA and STEM fields.