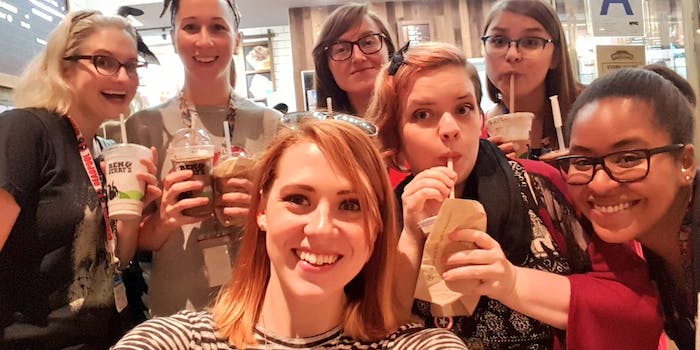 Some guys just can't handle seeing a photo of women having fun together.

If you’re a woman, even the simple act of posting a selfie can inspire harassment. We’ve seen guys call women sluts for using Snapchat‘s dog selfie filter, and now a Marvel Comics editor is being harassed for… drinking a milkshake with her coworkers, apparently?

Heather Antos edits several Marvel comics including Gwenpool and the Star Wars spinoff Poe Dameron, and she’s very active on Twitter. Last week she posted a selfie with some of her coworkers, and because those coworkers were women, the photo attracted garbage commenters like moths to a flame.

“Can we just get off of feminism and social justice and actually print stories,” complained one response to this completely innocuous photo. “Gee, I can’t imagine why Marvel’s sales are in the toilet,” wrote another. Others harassed Antos via direct message.

Woke up today to a slew of more garbage tweets and DMs. For being a woman. In comics. Who posted a selfie of her friends getting milkshakes.

How dare I post a picture of my friends on the internet without expecting to be bullied, insulted, harrassed, and targeted.

Once Antos started tweeting about the problem, the comics community jumped to her defense with the #MakeMineMilkshake hashtag, a play on the old slogan “Make Mine Marvel.” Over the weekend, the hashtag grew to the point where even the official Marvel account was showing its support for Antos and her coworkers.

It’s heartening to see such a swift response to sexism. However, this was also a harsh reminder of how hard it is to avoid “provoking” harassment. Women can face abuse for the tiniest of political statements, like when Mockingbird writer Chelsea Cain was driven off Twitter last year. Her crime? Writing a character who wore an “Ask me about my feminist agenda” t-shirt.

Heather Antos inspired backlash simply by existing. For some people, the mere presence of women in geek culture is still perceived as a step too far.