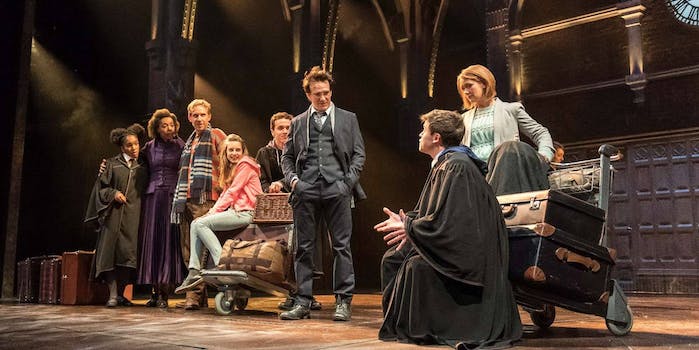 Fans are comparing 'The Cursed Child' to fanfic, but it didn't go as far as including a canonical gay romance.

This article includes spoilers for Harry Potter and the Cursed Child.

One of the most common comments about Harry Potter and the Cursed Child is that it feels like fanfic, a description that is often unfairly used to denote bad writing. In this case, it means something more specific.

For many longtime Harry Potter fans, The Cursed Child is littered with familiar fanfic tropes, along with the kind of small-but-noticeable flaws that fanfic readers are sure to recognize.

Take Delphi, the play’s most important new character. I hesitate to use the loaded term “Mary Sue,” but as a mysterious interloper with blue hair and a tragic past, she’s exactly the type of character we saw lampooned in “My Immortal,” the ultimate Harry Potter badfic. Introduced as a kind of Tonks-lite, she befriends Albus Potter before being revealed as Voldemort’s daughter. Yet her role is oddly minimal for most of the play, relying on two teenage boys to carry out her evil scheme—which she encourages by manipulating them with her sex appeal.

The fanfic (or rather, badfic) similarities don’t end there. There are several moments where established characters behave in subtly out-of-character ways, such as Ron’s decision to give his nephew Albus a love potion. This feels more like a slightly cruel Weasley Twins joke than Ron’s dry sense of humor, especially when we learn that Ron is fine with Albus (seemingly) using the potion to coerce an older woman into dating him.

Characters sometimes speak in a cadence that feels oddly jarring for the Harry Potter universe (“I’m quivering with geekiness,” says Scorpius Malfoy), and there are a couple of moments that feel like near-miss attempts at recapturing the imagination of the earlier books. Hermione, a veteran of magical puzzles and tests, inexplicably hides a dangerous magical artifact behind a series of riddles in her office—riddles that are later solved by a pair of 14-year-olds. It’s a nostalgic callback to things like Snape’s puzzle poem in The Sorcerer’s Stone, but it’s still an odd choice for the otherwise sensible Hermione.

And then there’s the Trolley Witch, who is already one of fandom’s favorite love-it-or-hate-it moments in the play. Nothing prepared us for the discovery that the Hogwarts Express snack lady is actually some kind of immortal cyborg Terminator.

When fans talk about The Cursed Child having a fanfic vibe, it isn’t necessarily a disparaging comment. Some details, like the Trolley Witch, feel very much like “crackfic,” the kind of stories that revel in random absurdity. Other things, like Draco and Harry finally setting aside their differences, are exactly the kind of emotional closure that fanfic has attempted to provide for years.

The frustrating thing is, we’ll never know if this fanfic overlap is a coincidence. If J.K. Rowling secretly spent years reading fanfic for her own books, she’ll never admit it. Similarly, there’s no way of knowing if playwright Jack Thorne has any familiarity with the rhythms of Harry Potter fandom. Maybe he just read the books and came to the same narrative conclusions as countless other writers before him. (In many ways, his writing also has a lot in common with recent Hollywood sequels like Jurassic World, Star Trek Into Darkness, and Star Wars: The Force Awakens—which all relied heavily on revisiting and recycling familiar stories instead of exploring new material.)

The most plausible explanation is sheer coincidence, but it’s interesting to see how The Cursed Child combines themes that feel appropriate for a West End play (the difficulty of living up to the legacy of a famous parent) with ideas that we specifically see in fanfic (Ron and Hermione’s romance being explored in different timelines; Voldemort having a secret daughter with cool hair and minimal backstory). In particular, many fans are already wondering to what extent Albus and Scorpius’s relationship was informed by fandom, if at all.

.@antoboyle: “Scorpius is a joy to play. We’re different, but there’s a lot of him in me, like his want for fun." pic.twitter.com/deHrkW2HUM

Although Albus Potter and Scorpius Malfoy only show up for the last few pages of Harry Potter and the Deathly Hallows, they quickly became a popular fanfic pairing—a next-generation twist on Harry/Draco, which remains one of the most popular ships in the fandom. Intriguingly, fanfic writers came to many of the same conclusions we see in The Cursed Child: that Albus and Scorpius would be weighed down by the expectations and strong personalities of their fathers and would form a bond against the approval of the extended Potter/Weasley family.

In The Cursed Child, Albus and Scorpius are inseparable friends, exchanging the kind of heartfelt declarations that Harry, Ron, and Hermione were usually too embarrassed to say out loud. At one point, they’re actually put in a kind of Romeo and Juliet scenario, torn asunder by Harry’s belief that Scorpius is a bad influence. Since Harry spent his formative years hating Slytherins in general and Malfoys in particular, this is a neat illustration of how anyone can succumb to prejudice. Harry forbids his son from seeing his only friend, simply because he’s a Malfoy. It’s a satisfying evolution from the way the books demonized all Slytherins as villains, but Albus and Scorpius’s friendship also feels more explicitly romantic than the subtle subtext that made Harry/Draco so popular.

Harry and Draco’s obsessive schoolboy rivalry provided ample material for fanfic, but few fans would argue that Harry/Draco seriously seemed like it might be a canonical romance. Meanwhile, Albus/Scorpius enters the realm of outright queerbaiting, where the text alludes to characters being queer without officially confirming it. As well as being the focal point for the entire story, their friendship is affectionate and emotionally intense (at one point Draco says his son is “in tears” because they’ve been separated), and can easily be interpreted as a youthful precursor to romance. Scorpius even expresses jealousy when Albus is with Delphi, like Ron and Hermione’s bickering whenever one of them had another love interest.

By comparison, Scorpius’s crush on Rose Weasley comes across as a no-homo afterthought. Poor Rose’s main role is to disapprove of their friendship and reject Scorpius’s overtures in a couple of scenes bookending an entire two-part play about Albus, Scorpius, and their fathers.

This whole situation is built on a bedrock of heteronormative assumptions. Ginny’s childhood crush on Harry was awkward and relatable at age 11, and it later blossomed into true love. Scorpius’s pursuit of Rose is a charming quirk, and Ron’s teen relationship with Lavender Brown was played for laughs. But Albus and Scorpius, who already love each other and are presented as an inseparable partnership, apparently cannot be put in the same category as these straight teen romances.

Harry Potter and the Curse of Heteronomativity

J.K. Rowling has faced growing criticism for the predominantly straight, white cast of the Harry Potter books, something that The Cursed Child worked to correct by casting a black actress as Hermione. However, the relationship between Scorpius and Albus unintentionally highlights the lack of queer characters in the series.

The Cursed Child was in a unique position to include queer representation in a medium that would be read and seen by millions, influential for the same reasons that Noma Dumezweni’s Hermione is influential. And while Albus and Scorpius didn’t have to be the characters in question, it still feels like a missed opportunity—not least because same-sex relationships are often framed as “adult-rated.”

It would have been revolutionary to see Scorpius have a crush on Albus in a similar way to his crush on Rose, but apparently when it comes to The Cursed Child‘s fanfic callbacks, queer representation was a step too far.