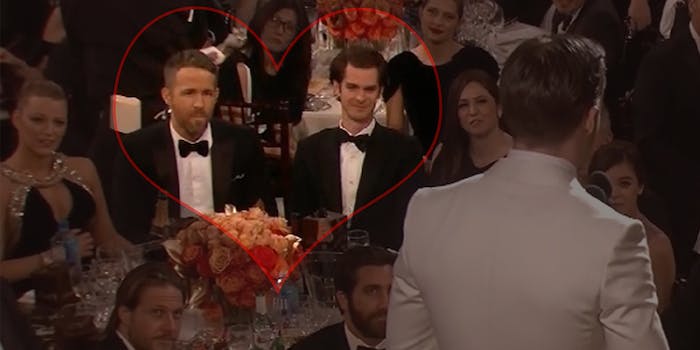 This is how you lose in style.

Deadpool may have walked away empty-handed at the 2017 Golden Globe Awards, but its star still got away with a win of his own.

As some critics predicted, the Golden Globe Award for Best Actor—Motion Picture Musical or Comedy went to Ryan Gosling for La La Land. Ryan Reynolds, who was nominated for Deadpool, took the loss in stride by kissing fellow Golden Globe nominee Andrew Garfield (for Best Actor—Motion Picture Drama) as Gosling walked to the stage. Reynolds’ wife, actress Blake Lively, was laughing along right next to him.

the kiss heard around the world pic.twitter.com/hUw67YOYU0

It was in the background of the shot, and if you weren’t looking for it, you could’ve easily missed it. Keen fans quickly picked up on it and came to a realization: Because Reynolds plays Deadpool and Garfield was Spider-Man, Spideypool was now canon.

At least now we know that #SpideyPool is real. #GoldenGlobes That's a classy way to lose an award. #LoveWins #Deadpool pic.twitter.com/CiSplwkMj7

Fans have shipped Spideypool, or the romantic pairing of Spider-Man and Deadpool, for years. As friends and rivals, they bring a unique dynamic to the comics whenever they’re paired off together, they’re similar in nature, and they have great chemistry with each other (although Deadpool appears to have chemistry with everyone). They even teamed up in a comic together after fans requested a series starring Peter Parker and Wade Wilson.

If you don’t read the comics, you can usually expect cosplayers tapping into those aspects of the characters at fan conventions.

Unfortunately, this looks like as close as we’ll get to Spideypool happening in real life for now. Spider-Man’s movie rights are owned by Sony (and being loaned to Marvel Studios) while Deadpool is owned by Fox, and a major Marvel cinematic crossover seems unlikely. Plus, Garfield is no longer Spider-Man; that mantle is now taken up by Tom Holland.

Reynolds and Garfield may have both lost the Golden Globe, but in the process they won our hearts.