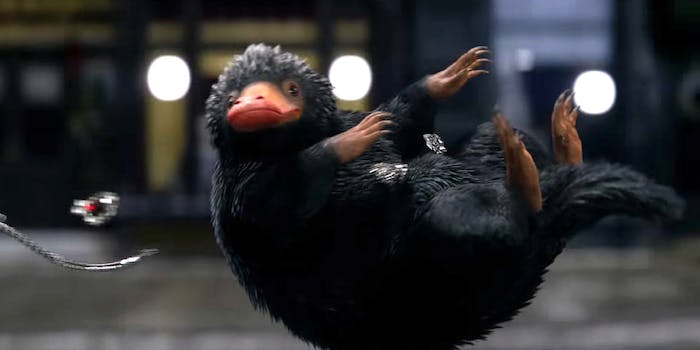 Why isn’t ‘Fantastic Beasts’ capitalizing on its scene-stealing niffler?

The scene-stealer is sorely lacking in shiny merch.

Warning: This article contains spoilers for Fantastic Beasts and Where to Find Them.

Newt Scamander, the naive magizoologist who accidentally loses his beasts in 1926 New York, may be the hero of Fantastic Beasts and Where to Find Them, but he’s not the breakout star of the movie.

That, of course, is a character whose thirst for anything shiny drives much of the film’s plot.

The niffler was one of the few creatures in Fantastic Beasts with a previous appearance in the Harry Potter books. Nifflers—which are totally real!—are little scavengers with an affinity for shiny objects. They were cut from the Harry Potter films, but in the books Harry, Ron, and Hermione learn about nifflers in Care of Magical Creatures class in Goblet of Fire, and the Weasley twins use one to make Dolores Umbridge’s life a living hell in Order of the Phoenix. Fantastic Beasts finally shows us what we’ve been missing.

The niffler who resides in Newt’s suitcase, when it’s not trying to get its hands on as much gold and jewels as possible, is animated and expressive. It appears to resent Newt for taking away all of its shiny objects, and while it’s not often seen (which might be a good thing), the niffler steals every scene it’s in.

Here’s the exclusive clip from the second Emoji Magic spell. A new spell will be posted tomorrow to unlock another #FantasticBeasts scene! pic.twitter.com/qcI2aBneuq

I didn’t see Fantastic Beasts until more than a week after its release, having been out of the country, but I was quickly onboard the Niffler train that the rest of the world was already riding. Revelist even described the niffler in Fantastic Beasts as “Baby Groot meets Joanne the Scammer,” which is an incredibly accurate assessment of the creature’s personality.

Along with endless praise, there’s also a lot of fanart coming out of this little guy’s never-ending quest for shiny objects.

The best part of #FantasticBeasts was the niffler. End of discussion. pic.twitter.com/wKog60CL2g

Newt called back Niffler.
Niffler pretended not to notice! pic.twitter.com/I5GqxhgHDr

But the comparison to Baby Groot, which sprouted to his spot as a Guardians of the Galaxy fan favorite, had me wondering where I could get my hands on my own toy niffler.

As it turns out, there’s not a lot of official niffler merchandise out there. Funko even has two versions: one hoarding gold and one holding a coin purse. They’re both very cute.

But if you were looking for something like a plush niffler? As far as official merchandise goes, you’re out of luck.

This sort of issue usually comes up regarding female characters in major franchises, something that’s still a problem even when they are the lead character of the film. (Looking at you, Rey.) This time, Warner Bros. has thankfully released merch featuring Tina and Queenie Goldstein and MACUSA President Seraphina Picquery.

As far as the niffler is concerned, we have no idea why there aren’t more of the critters populating store shelves. If your movie has a cute and cuddly creature that could easily be the BB-8 or Groot of your franchise, why wouldn’t you produce more of it?

Star Wars: The Force Awakens may have incorrectly assumed that Kylo Ren would be the breakout character of the film, but Disney clearly understood people would want BB-8 merchandise.

There is one possible explanation. Considering the core story of the Fantastic Beasts series over five films isn’t about the fantastic beasts but rather the rise and fall of Grindelwald, perhaps Warner Bros. doesn’t want to invest too much in the pesky scene-stealer. Now that Newt’s pretty much done with his book, the niffler might not even appear in future movies. But perhaps we could see an appearance or two if Newt decides to keep him at home in Britain as some comic relief as the story goes into darker territory.

For now, however, the Etsy community has you covered for all of your beastly needs.