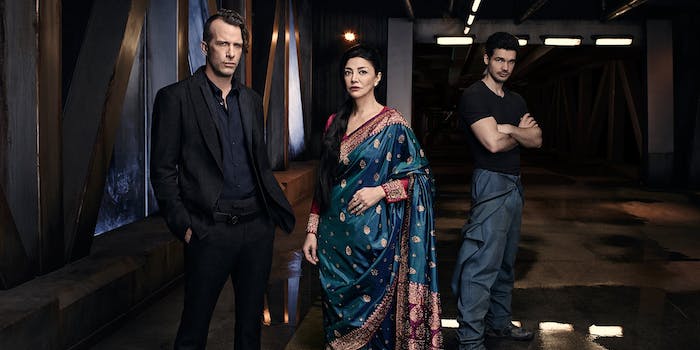 'The Expanse' is already being touted as the new 'Battlestar Galactica.'

Syfy‘s The Expanse is a space opera on a grand scale, based on the series of novels by James S.A. Corey. As the channel’s most expensive original show to date, it’s already being compared to Battlestar Galactica—another gritty, complex thriller about humanity fighting for survival in space.

The Expanse takes place 200 years in the future, with humankind spread across Earth, Mars, and the asteroid belt. Tensions are high between the old world of Earth and the young Martian colony, with the native “belters”—especially on the dwarf planet Ceres—stuck in the middle.

This conflict gives the show its three main settings. Thomas Jane stars as a detective trying to track down a missing girl on Ceres, while Steven Strait is a young officer onboard an ice-freighter that finds a mysterious ship in the asteroid belt. Back on Earth, the main political storyline follows U.N. diplomat Chrisjen Avasarala (Shohreh Aghdashloo) who is trying to keep a lid on the power struggles between the two civilizations.

Adapted by Mark Fergus and Hawk Ostby (Iron Man, Children of Men), The Expanse is one of the most anticipated sci-fi shows in years. Speaking to the Daily Dot, Mark Fergus discussed the worldbuilding behind the different spacefaring cultures, and shared some of the unexpected inspirations for the show.

Obviously worldbuilding is a really important aspect of a big sci-fi series like this. Could you tell me a bit about how visual design played into that, with the differing aesthetics in fashion and architecture between Earth, Mars and Ceres?

We started from a point of going back over the centuries and thinking how things would have developed. You know, the engine that allowed people to explore the solar system, then what place did they get to first, how did they bore out those source tunnels on an asteroid station, and how did that change the way people live. 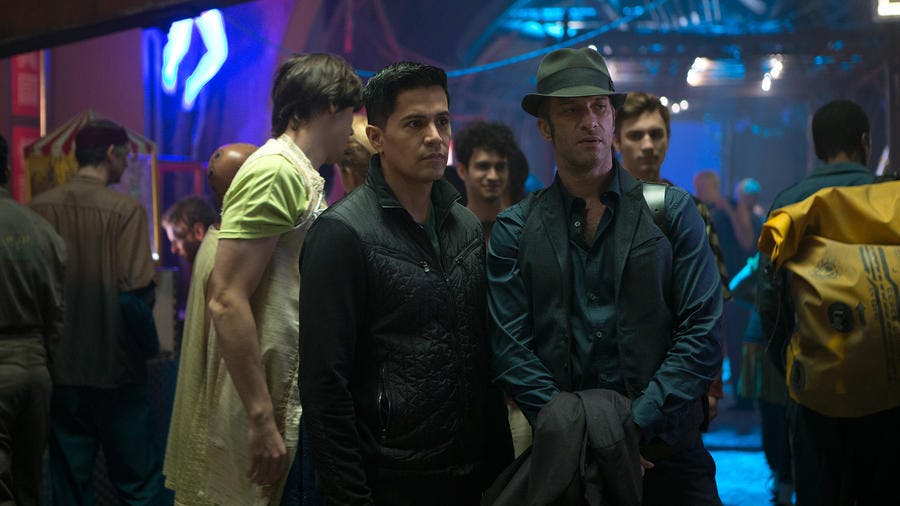 The closer you are to the core of an asteroid, the more harsh the Coriolis effect, the skew of gravity. So naturally the underclasses end up in the most difficult places that would effect your inner ear, have physical effects, and be the toughest places to live. The richer people would end up in the ones that are closer to their home planet.

How would the look of everything come out of that? From the ships—first of all, not having to look like sailing ships or be symmetrical or aerodynamic—most of the ships never come through an atmosphere so they can look like whatever they needed to look like. Pure functionality.

The Canterbury, that’s in our first episode, started off as a colony transporter, a place that used to have beautiful murals like: “Come see the stars.” They were designed to transport vast amounts of people out into space, and when that exodus finished they just gutted it, tore out the seats, slapped up some walls, and they refashioned it into an ice-freighter. But it wouldn’t be beautifully redesigned, it would be ugly and very unwieldy. 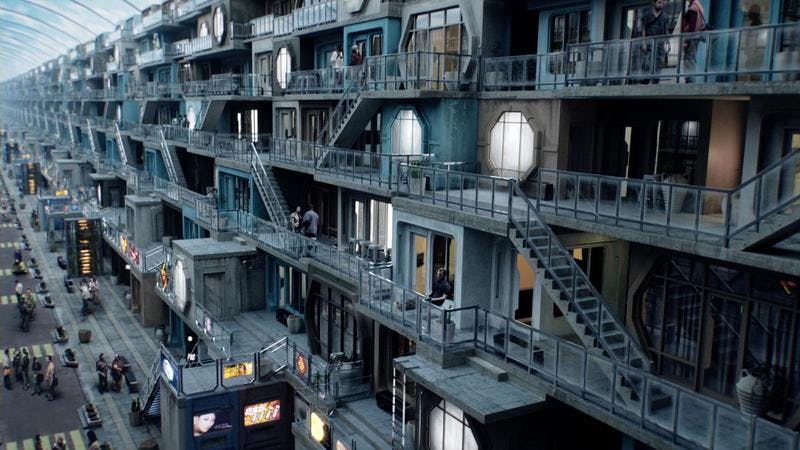 There’s also the idea that not every world should have a totally different look, because technology’s being reused and repurposed and brought to a new place. I guess Mars would be the biggest difference. We wanted to show a culture that was sort of on the rise… who wanted to create a paradise out of a planet that is harsh and not wanting to be settled. They could bring oceans, they could bring air, they could bring atmosphere, they could sort of start over where Earth had failed.

Kind of the obvious parallel is China, but kind of any place that has a common vision, a common dream. They’re still dreaming, whereas Earth is holding on for dear life.

One thing I found very interesting was the language used by the belters. How was that devised? Did you have a language consultant to figure out the sign language and the slang?

It was a really fascinating part of the books so instead of shying away from it we hired a gentleman named Nick Farmer who designed the language to have grammar and verbs and nouns and everything. We had a linguist, Eric Armstrong, who designed a very specific belter accent to go along with the language, and regional versions of the accent. You know, extreme belter versus light belter versus people who are trying to disassociate from being belters. 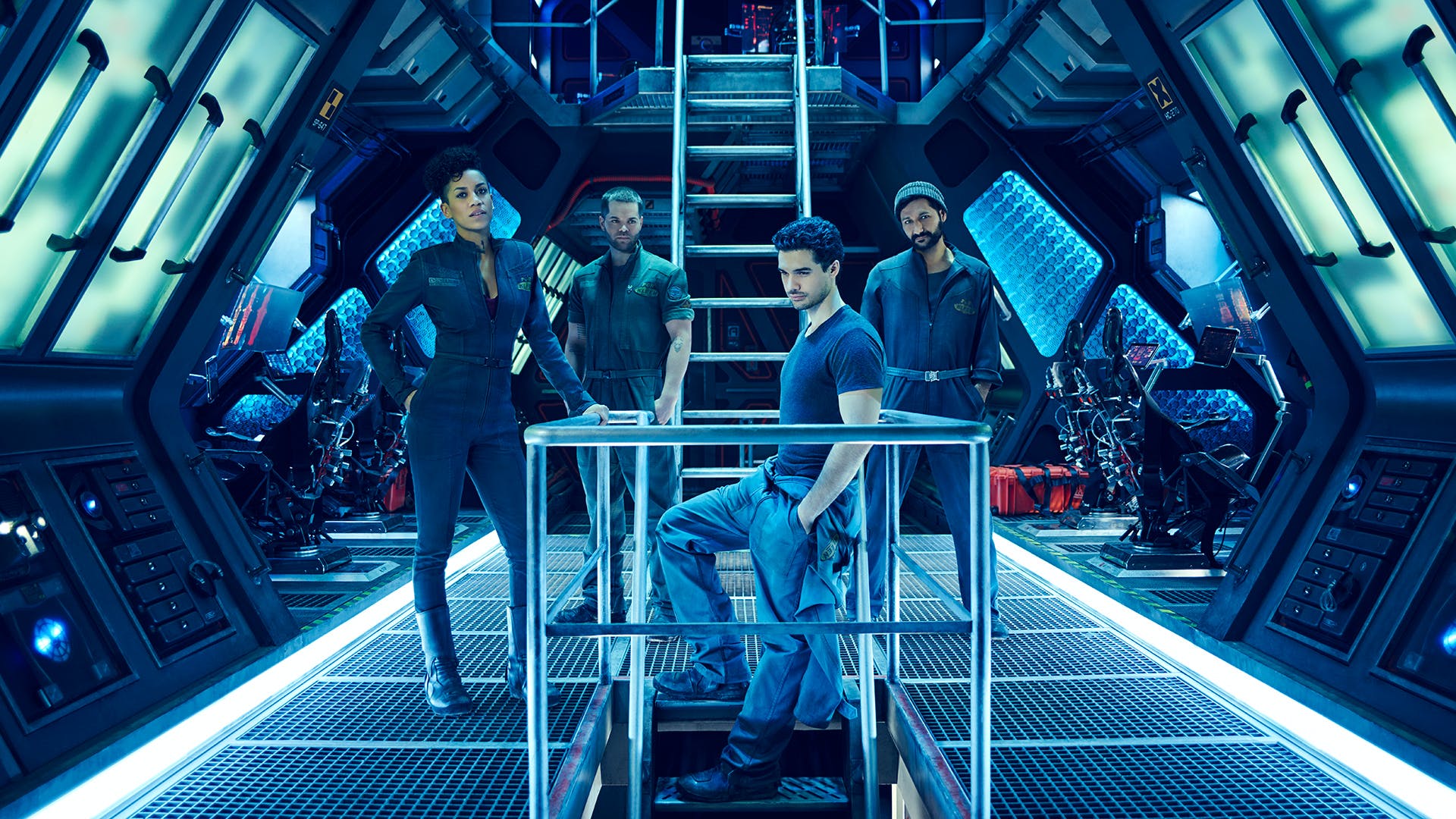 We decided not to subtitle anything or to coddle the audience through it. Sometimes you have to figure out the scene by looking at the context, because a lot of the time when we use it, we want the Earthers and people who don’t understand to feel a little alienated, that they’re being talked about by people in a different language.

You and your partner [Hawk Ostby] have worked on other adaptations before, so obviously you know to pick and choose which things will work well onscreen. Is this going to be a very accurate adaptation, or are you shaking things up so people who are familiar with the story won’t be able to predict what’s happening next?

I think we’re trying to build from the best of both worlds. The reaction we’ve got from people so far has been that we’ve followed the books very carefully in all the ways that they hold dear. We have done quite a bit of adapting and compressing and elevating certain details and shrinking other details, changing the relationships between people.

We don’t want to have a show where we have to have a reckoning take weeks to happen, so… kind of without being specific, you can imply that time is passing while you’re still telling a pretty tight, fast-moving story. When I watched The Empire Strikes Back—there’s two stories going on in that Star Wars film, and they seem to make no sense to each other in the timeframe. One seems like days and the other one seems like months, and they’re intercut as if they’re happening in the same time. But you know, in between every cut the ship could have been traveling for days or weeks and they don’t show it. We used a lot of that in the adaptation.

One interesting change was moving the character of Chrisjen Avasarala into the first season when she was in the second or third book. Was that because you felt it needed a bit more of a gender balance?

Yes, to balance it out from being a guy intercutting with another guy, doing very hardboiled guy stuff. That’s certainly one of the reasons. Throughout the second book she’s this formidable character, and she’s so fun and foul-mouthed and brutally efficient at helping to keep the solar system in line. And to offset the two male characters, what a great way to balance it out, and also to balance out a show about a ship and a show about an asteroid station. It was one of the first things we pitched when we went out with the series, that we’d love to bring this character forward because she gives us Earth’s perspective. 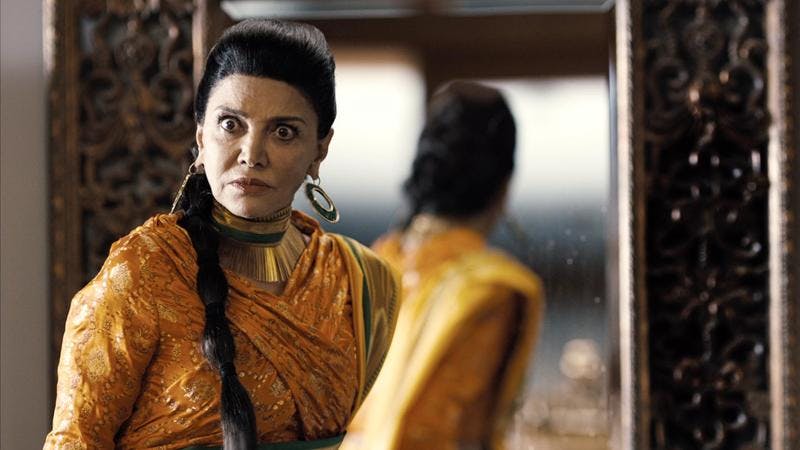 To talk about the show’s heritage for a moment, I was wondering if you guys were influenced by shows like Battlestar Galactica or Babylon 5 or Deep Space 9, or if you’re trying to avoid comparisons.

I know there’s a lot of talk about Galactica, which I have to admit I’m not as familiar with as I should be. I know the show well, I’ve seen many of them, but not the whole series the way that I have other shows.

It’s grown really iconic, and you can’t get away from those comparisons. We welcome them, even though we really took more inspiration from shows like—well, we go back to Breaking Bad all the time, in terms of the humanity and the inner dilemmas, and how people get through situations. When we originally pitched the character [Detective Miller] to Thomas Jane we talked a lot about Paul Newman in The Verdict, the guy trying to get his soul back.

But the authors of the books have an unbelievably encyclopaedic knowledge of every sci-fi movie and book that’s ever been done, and every show. They have an enormous wellspring of knowledge, and they tried to play with the conventions and subvert them and go somewhere new.

We’re all Game of Thrones fans, Breaking Bad fans. I’m much more into Mad Men and Breaking Bad kind of human drama stuff. I think that’s what it ultimately comes down to as well, we love sci-fi spectacle but we tried to stay away from grandeur. We like telling stories much more influenced by a sci-fi film like Alien, which is about the grunts who work below deck, making the ship work. Our heroes are generally the little guys. The stories of those people who get caught up in much bigger things. In that way we’re also hugely influenced by L.A. Confidential and Chinatown, which are stories about the birth of Los Angeles.

Most of our writers are not even from sci-fi. We have a Mad Men writer, we have one writer from The Killing. We have a real mixed bag of writers, and we want to give people a perspective other than just science fiction.