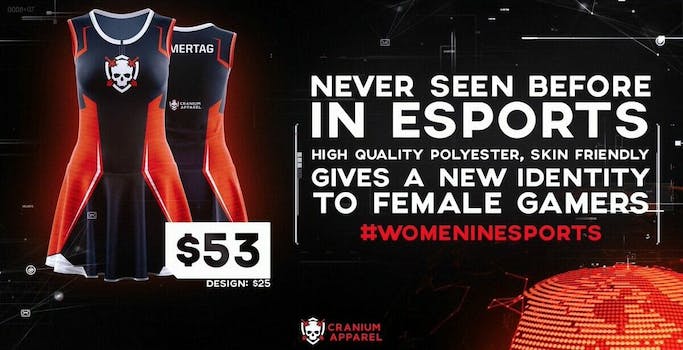 This dress for ‘female gamers’ isn’t going over well

First of all, no women were involved in the design of this dress.

First, there was The Dress, the color-shifting frock that some are sure was white and gold, while others saw as blue and black. Now, there is The Gamer Dress—unabashedly red and black—that’s spawning controversy and memes in the gaming community.

Esports apparel company Cranium Apparel, which creates and sells jerseys for esports teams, revealed the dress on Twitter over the weekend in what’s now a seriously ratioed tweet. Cranium Apparel posted a photo of the dress, which is essentially an elongated polyester jersey nipped in at the waist and without sleeves. (One of the more egregious features, a cleavage zipper, won’t make it to the final version, Cranium Apparel said on the product listing.) The dress, advertised at $53, is described as “never seen before in esports,” designed to give “a new identity” to women in esports. The dress officially went up for sale on Tuesday.

“GET READY FEMALE GAMING COMMUNITY,” Cranium Apparel wrote on Twitter. “ESPORTS DRESS NOW AVAILABLE. Its [sic] high time that we do something for the female gamers who receive so much backlash in the community. Stay Strong… We Respect You. Proudly supporting #WOMENINESPORTS. Tag Every Female Gamer You Know.”

The problem many are having with this idea isn’t that it’s a dress. Dresses are great! As pointed out on Twitter by What’s Good Games co-founder Andrea Rene, it’s absolutely OK to love wearing dresses and playing video games—and feminity is often used to discredit women, in games and elsewhere. “At one point, I was told I couldn’t wear dresses and be authentic talking about games,” Rene wrote. “I like to think I proved them wrong.”

It’s the messaging around the dress that many found issue with—harassment of women in esports won’t be fixed because of a dress. Nor will it create a “new identity” for women in gaming, especially in a landscape where women are already scrutinized for what they wear or how they look. (Many women who stream on Twitch are often called sexist names like “booby streamers” or “Twitch thots,” which Polygon reporter Julia Alexander defined as a term “often used to insult a female streamer on a predominantly male platform.”)

Media critic Nico Deyo noted that while the intention behind the dress was probably “good-hearted,” the message was an issue. “The biggest problem, though, was the indication that this dress was to respect women and to make up for the harassment we suffer, which is just bonkers,” Deyo told the Daily Dot. “A dress is not going to make anyone be less harassed.”

Dawn “Yohosie” Hosie, a Dragon Ball FighterZ pro gamer, echoed that sentiment: “It didn’t recognize that women’s esports dresses have been done before (and better),” Hosie told the Daily Dot. “The boob zipper and ‘gaming chair’ colors masquerading as feminism and equal representation for both women and men in esports felt like the most consumerist solution to a very real problem in the esports arena.”

Hosie added that she didn’t find the dress offensive, just laughable—a short dress is the last thing she wants to wear on stage while competing. Some people might feel comfortable competing in a dress, but Hosie does not. “The idea of me crossing my legs while playing or having to be conscious of how I’m sitting fills me with anxiety and the exact opposite of how I want to compete,” she said.

Unsurprisingly, Cranium Apparel noted in a Twitter reply that no women were involved in the design or decision-making for the dress.

Which is unfortunte because it’s not like women just showed up recently on the esports scene. Women have always been interested in esports and gaming, and the fan base has grown exponentially in recent years. A 2018 Nielsen report found that the 29 percent of new esports fans “skew less male” than earlier esports fans. Twenty-five percent of esports fans, ages 13 to 40, are women, according to the report. In the U.K., analysts Kids Insights found that teenage girls and boys engage in esports at similar rates; in some instances, like attending live events, more girls were reported to have done so.

The sports industry might be moving away from marketing merchandise to women with a “shrink it and pink it” mentality, but esports merchandise is lagging behind. There just aren’t that many options designed specifically for anyone but men. Take Blizzard Entertainment’s Overwatch League, for example. The game itself is praised extensively for the diversity of its hero pool. (There are a bunch of female heroes, but Blizzard is consistently criticized for having no playable Black women.) On the Blizzard Gear Store, where the company sells its merchandise, there are tons of different shirt cuts, but most of it doesn’t carry over to esports wear. Overwatch League merchandise, created and sold by Fanatics, does offer one women’s cut T-shirt for each team. All jerseys, however, are in a men’s cut. There are 647 items listed under the men’s category compared to the 24 items for women. Of course, women can and do wear the men’s cuts.

Blizzard Arena Los Angeles, where the Overwatch League is held each week, is often packed with women supporting their favorite Overwatch League teams. A lack of merchandise offerings for anyone but men is something they notice—and people have been tweeting about it over the years.

as much as it is an xd that no women were involved in the design process I will appreciate that there was a thought for apparel for women. @ owl wheres my womans jerseys or my dress ty in advance https://t.co/eFoeR4uxpT

Deyo, who wrote a blog post outlining how esports companies can create merchandise to folks other than men, told the Daily Dot she would like to see “well-made clothing that comes in a variety of colors and sizes.”

“I think keeping it simple with athleisure/sweats and jerseys is honestly going to be a crowd pleaser but something that is maybe a little more feminine in some ways with prints—a good example would be [the Overwatch League’s] Houston Outlaws’ hoodie with the floral print logo—is great for guys, gals, and every other gender that wants to look a little cuter.”

Houston Outlaws’ floral hoodie, which was available in a limited quantity, is an example of how things are changing. The hoodie isn’t explicitly marketed to men or women, but it’s cool, and appeals to a wide variety of people. Naturally, fans were thrilled. Champion Athleticwear, too, is making a concerted effort to create new esports gear for women, with a Team Dignitas-branded women’s line in partnership with the organization’s championship Counter-Strike: Global Offensive team. (The collection isn’t available just yet, however.)

GET YOUR OUTLAWS FLORAL HOODIE BY @third_label NOW!@TMobile customers receive a 20% discount!

Limited Quantity, so move fast and get yours before stock runs out!https://t.co/9wRbuA9F25#UpTheAnte pic.twitter.com/ZvhQETkvaA

The Gamer Dress was destined to fail because Cranium Apparel positioned itself as an advocate for women, without much input from women. Cranium Apparel founder Savar Sethi told the Daily Dot, though, that he’s listening to feedback from the community. “We have identified the flaws within our team and are continuously working to fix them,” he said. “We have seen many people come forward to help us with our future products and we highly appreciate them. We have also got a few women on board and we are turning to them before finalizing our next addition to the store.”

Sethi added that Cranium Apparel “overused emojis” in the initial launch post, and also noted that “the new identity tagline was a bit rogue.” He continued: “We have learnt a lot from this and will definitely take utmost care while announcing our future products.”