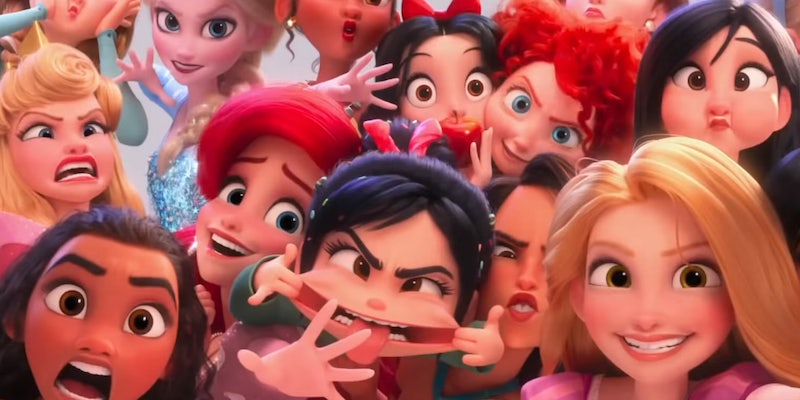 Sometimes you just need to hang out in your poison-apple PJ's.

If you asked the internet what Ralph Breaks the Internet: Wreck-It Ralph 2 was about, you’re bound to get a whole mess of different answers. While it’s generally assumed that it will be about the video game character Ralph saving the internet from … something, every trailer and promo screenshot has put a heavy focus on Disney princesses hanging out and having some girl time with Wreck-It Ralph protagonist Vanellope.

Entertainment Weekly acquired a brand new screenshot showing off Vanellope hanging out with the Disney princesses. Instead of wearing their usual dresses and adventuring outfits, however, they’re all wearing casual loungewear versions of their original costumes.

All the Disney princesses having a sleepover and acting like normal teenagers? Yes please! Look they even have the starbucks pic.twitter.com/KhZ1Qil8o5

Sharp-eyed readers will notice the graphic designs on some of the princesses’ shirts. Frozen’s Elsa and Anna are wearing a “Just Let It Go” and “Finish Each Other’s Sandwiches” shirt, respectively. Sleeping Beauty has a “Nap Queen” long sleeve on, and Snow White is wearing a shirt with an apple draped in poison that forms a skull. Who knew Snow White was so metal.

The latest trailer shows the ladies hanging out, listening to Brave’s Merida speaking in Gaelic, much to the confusion of all the others.

The new take on Disney’s princesses has Twitter afire with infatuation, with plenty of fans admiring the more casual identities each princess is expressing.

Snow White wearing a shirt of the thing that almost murdered her is such a power move pic.twitter.com/jhxj07UXGr

Mulan is arguably getting the most love for her red jacket and rolled-up jeans, a relaxed-yet-ready outfit. Artists have already started crafting countless bits of fan art.

Ok guys, Im floored by the overwhelming response I got from the Mulan fan-art. I dont intend to draw all girls from Ralph breaks the internet but picked my favorites from the bunch<3 Also thanks to those that pre-ordered my pins! T__T u guys are the best! https://t.co/uRq28aXZ1I pic.twitter.com/wiGa4XG5JR

The previous Wreck-It Ralph trailer also showed off the princesses meeting Vanellope, who quickly establishes that she, too, has suffered under the yoke of casual misogyny after Tangled’s Rapunzel asks if everyone thinks her problems were solved once a man came into her life.

Wreck-It Ralph 2 will be released in theaters on Nov. 21, and it stars Wonder Woman actress Gal Gadot as a brand new character. Disney will likely include the film on its upcoming streaming service, set to release near the end of 2019.