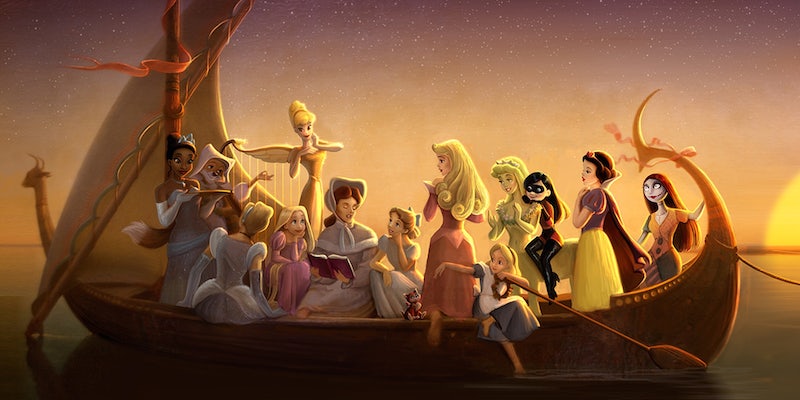 The story behind the doomed Disney Princess Academy

The reasons this gorgeous concept film won't ever happen are complicated.

In 2009, two enthusiastic artists and fans pitched the ultimate Disney crossover: a short film called Princess Academy which would have sent dozens of animated female characters to a dream boarding school.

Beautifully conceptualized and with the backing of Disney collaborators including Alan Menken, the project seemed to be a sure thing—until, according to one of the project’s creators, Disney’s move away from hand-drawn animation put the whole thing to rest. 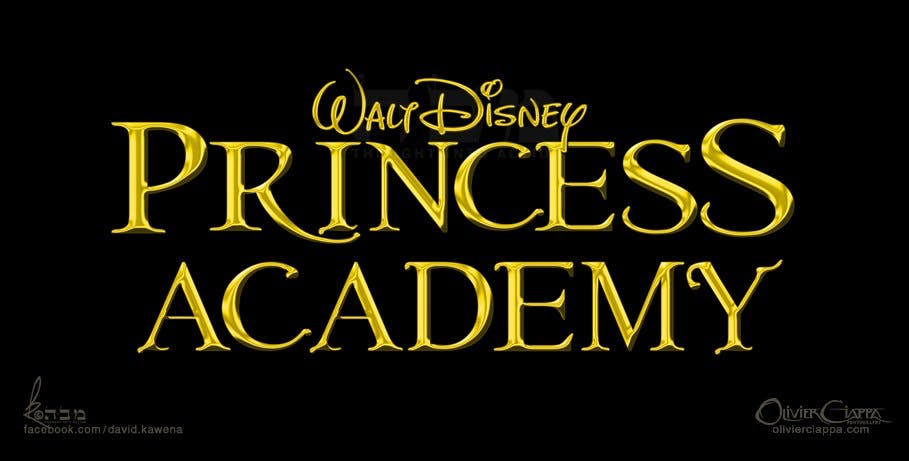 Much like Kingdom Hearts, Princess Academy would have combined numerous members of the Disney princess family in a single universe that imagines them all interacting together. Here’s a detail from the first group photo above, showing, from left to right, Rapunzel from Tangled; the Golden Harp from Fun and Fancy Free; Alice in Wonderland‘s older sister, Wendy Darling (Peter Pan), Dinah the kitten (Alice), Aurora (Sleeping Beauty), Alice Alice in Wonderland, a Fantasia centaur maiden, Violet Parr (The Incredibles), Snow White, and Sally (The Nightmare Before Christmas). 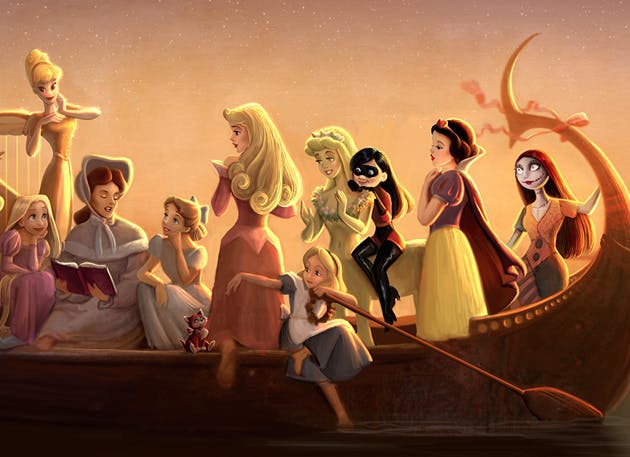 And that was only the beginning according to the creators. 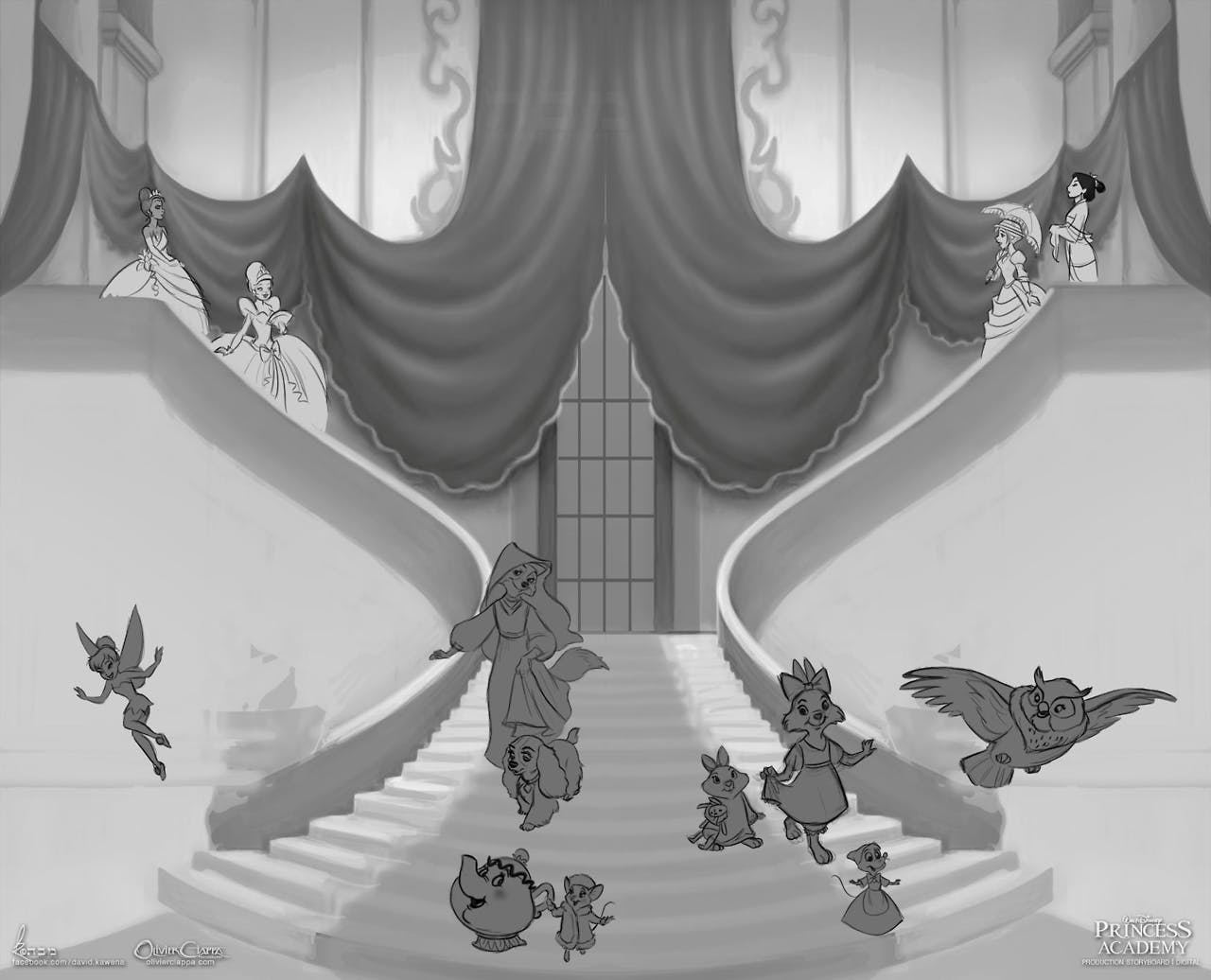 The project was the work of two Disney collaborators, David Kawena and Oliver Ciappa. Ciappa, who wrote and directed the short, is a well-known French filmmaker and photographer. “David Kawena” is a known pseudonym taken from a character in the Disney film Lilo and Stitch. Kawena has used the pseudonym for his professional and fan work for years. This includes  everything from concert photography to his stylish collection of homoerotic fanart of male Disney characters. On his Facebook account, Twitter account, Instagram account, and Deviantart account, Kawena has garnered hundreds of thousands of fans.

According to Kawena, the two of them worked on the project for months, securing the enthusiasm of composer Alan Menken, who would have written several songs for the film short. But then the reality of hand-drawn animation in a digital age set in:

Alan Menken was very excited about the project and agreed to work on it the moment we would have green light from the studio. After months working on it, with hundreds and hundreds of storyboards and concept art, the Disney Animation hand drawn studios closed its doors. So there was no point for us to even show that project.

Around the time Princess Academy folded, Disney was experimenting with other hand-drawn projects, most notably Paperman. But there was another problem on the horizon, one brewing between Ciappa and Kawena themselves.

The two had collaborated repeatedly, most notably on designing a new version of France’s famous “Marianne” image for a national stamp. Kawena later alleged that Ciappa had falsely taken credit for work Kawena had done on the collaboration, and sued him for copyright infringement.

Last year, during the beginning of Kawena’s lawsuit against him, Ciappa outed Kawena’s real identity in a Facebook post, in which he claimed that it was time the world knew who Kawena really was. Ciappa outed Kawena as an Israeli-born artist currently living in the U.S.

Between the lawsuit and the outing, there probably won’t be any future collaborations between the two. But we can at least enjoy the concept art from Princess Academy which Kawena and Ciappa have each posted on their various social media accounts.

“We wanted to create a very artistic, classy but also very funny hand drawn short,” Kawena wrote on Facebook regarding the project.

In “Disney’s Princess Academy”, I wanted to create something that would bring back the somewhat lost respect for hand drawn animation as an art form. By doing so, we decided that the entire look and feel of the short movie will be inspired by the worlds greatest works of art. 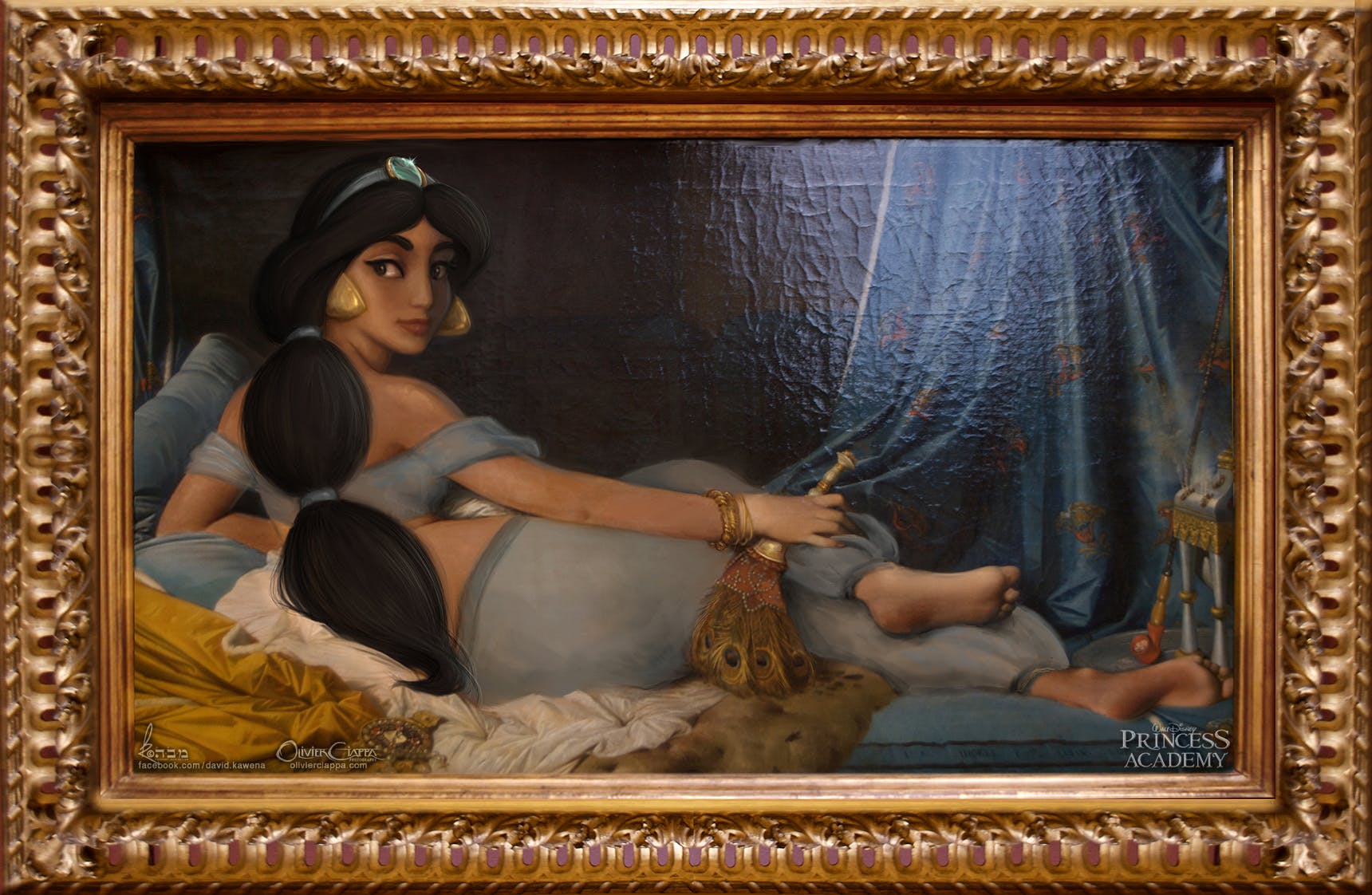 Illustration of Jasmine from Aladdin, inspired by Ingres’ Grande Odalisque

We can see the influence of classical artwork in the portrait of Aladdin‘s Jasmine, above, inspired by the famous Ingres painting La Grande Odalisque. We can also see it in this depiction of Hercules’ Megara as a classical Greek statue: 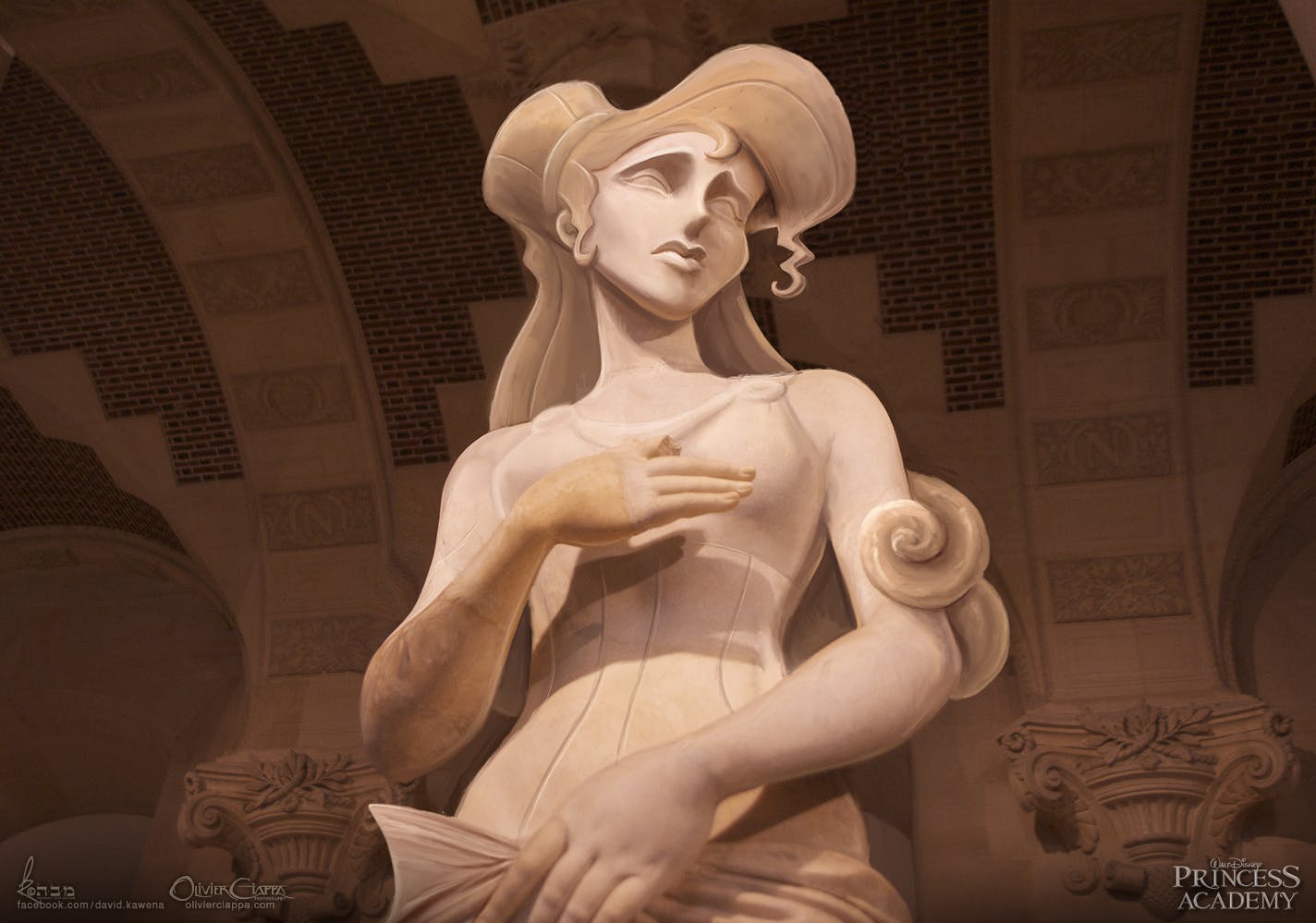 On his Tumblr, Kawena wrote of digging deep into the Disney archives to source his work for the project from the original studies from the films themselves:

“These style-guides notes dated back to 1995 from the production of ‘Hunchback’ served as a great source of inspiration,” he wrote of studies for the gypsy Esmeralda.

Probably one of Disney’s most beautiful leading female[s] – Esmeralda – is also the one who [is] completely ignored and forgotten. Not too long ago I tried to give her a place in the spot light in [a] project that was eventually cancelled. 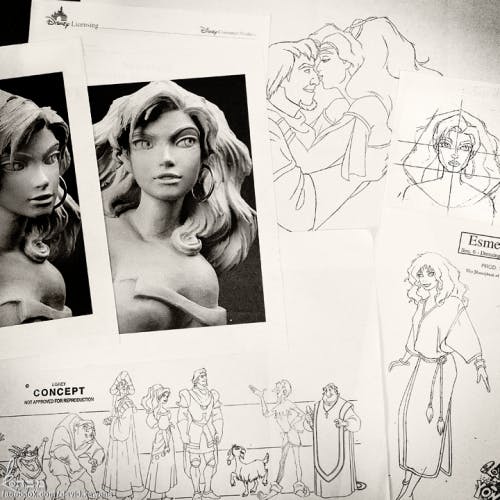 In its unrealized state, the project featured storyboards by Kawena and a script by Ciappa. These included meticulously planned references and homages, both minor and major, to a wide variety of Disney films. In the final scene, the characters gather for a grand ball in what looks like a homage to Cinderella’s castle and the Beast’s grand ballroom. Here’s a sequence of Tatiana and Charlotte from The Princess and the Frog making a grand appearance—with Tatiana helping Charlotte push her voluminous dress through the entryway.

Although it’s unlikely that the project will ever reach fruition, it has enjoyed recurring popularity in the years since Kawena and Ciappa began sharing parts of it online.

The Daily Dot has reached out to Kawena for comment, but it seems likely that both collaborators have moved on. More recently, Kawena has done stunning concept art for a musical adaptation of “The Little Match Girl:”

He’s also been doing more work for the Mouse itself.

Even if the original concept of Princess Academy never comes to light, we’ll still have plenty of gorgeous artwork from Kawena to enjoy in the future.

Correction: Sally from The Nightmare Before Christmas was misidentified in an earlier version of this story.