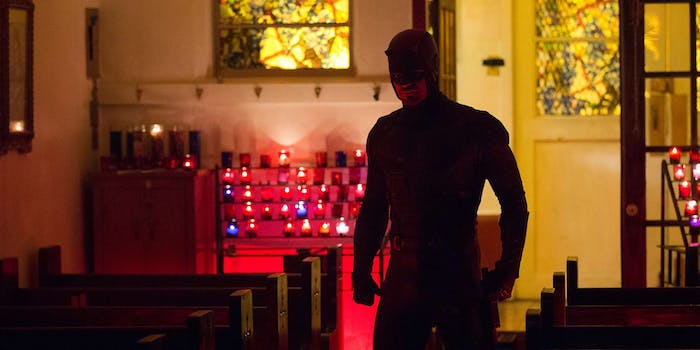 The true message of ‘Daredevil’ season 2: Matt Murdock is a terrible superhero

Daredevil doesn't seem to be saving anyone—especially himself.

With the exception of the Hand‘s oddly one-dimensional ninja army, Netflix’s Daredevil includes some brilliant antagonists. Characters like Elektra, D.A. Reyes and Stick avoid simplistic hero/villain binaries, while the show’s two most famous bad guys—Wilson Fisk and the Punisher—invite a deeper analysis of Daredevil’s effectiveness as a superhero. So much so that after season 2, you have to wonder if Daredevil is doing more harm than good.

Fisk and the Punisher each represent a more extreme side of Daredevil’s character. As a criminal overlord who wants to improve his neighborhood, Fisk shares a great deal with altruistic lawyer Matt Murdock. Then in season 2, Frank Castle is introduced as a more extreme alternative to Daredevil’s non-lethal crime fighting.

This kind of hero/villain overlap is a common theme in superhero comics, with one major difference: In most adaptations, the narrative celebrates the hero’s moral decisions. In the second season of Daredevil, however, there’s a strong argument to be made that Matt Murdock is completely terrible at his job and should retire his superhero persona immediately.

Matt’s season 1 character arc is fairly by-the-book. We follow his origin story as a masked vigilante, ending with him defeating Fisk in a classic supervillain showdown. Overall, his personal journey is positive. He mends his friendship with Foggy, rejects the damaging advice of his former mentor Stick, and the season closes with a hopeful look toward the future of Nelson & Murdock. Then in season 2, he basically flushes all this down the toilet.

As the second season progresses, Matt’s choices get worse and worse. He breaks off his friendship with Foggy, and tanks his burgeoning romance with Karen—basically following Stick’s old advice to reject human connections. He abandons his day job in the middle of an important case, leading Karen to wonder if he has a drinking problem or joined a fight club.

Unlike many dark antihero stories, the show doesn’t condone Matt’s self-destructive behavior. We see the emotional impact of his double life on his friends and career, and there’s a strong subtext that as a superhero, Daredevil just isn’t very effective. The Punisher—who is essentially a serial killer—disposes of far more criminals than Daredevil, and there’s no clear “win” at the end of the season. Sure, that ninja showdown feels like an appropriate superhero finale, but it doesn’t really achieve anything. The Hand is still around to fight whatever nonspecific “war” Stick has been talking about for two seasons, Elektra is dead (kind of), and Fisk is about a hundred times angrier than he was before.

Plus, it’s worth remembering that in season 1, Matt only defeated Fisk with help from Foggy and Karen. It was a team effort. The show is littered with proof that Daredevil doesn’t work better alone, right down to individual fight scenes where he relies on backup from Stick, Elektra or the Punisher. No man is an island, but Matt Murdock is determined to isolate himself as much as possible. Not just because he thinks it will keep his friends safe (and judging by Fisk’s threats against Foggy, that ship has sailed), but because he’s a mess.

Like Christopher Nolan’s Batman, Netflix’s Daredevil is energized both by a desire for justice, and by his own rage and violent tendencies. There are definitely more efficient ways of defeating organized crime than by punching individual gangsters in the face (maybe invest in a taser or stun baton?), but Matt Murdock enjoys the punching. That’s why season 2 draws so many parallels between him and Frank Castle, and why we see moments like Karen wondering if he has an alcohol problem. Matt is motivated by the failures of the justice system, but his crime-fighting techniques are directly influenced by his compulsion toward violence. Combine this with the after-effects of Stick’s terrible mentoring, and you get a pretty clear idea of why Matt is the way he is.

The second half of season 2 leaned heavily on Matt and Elektra’s conflict with the ninja army known as the Hand. Compared to the depth of storytelling for Fisk and the Punisher, the backstory for the Hand is thin to the point of nonexistence, compounding the show’s habit of using poorly characterized Asian villains as cannon fodder. But while Nobu (so evil they killed him twice) remains an enigma, this subplot added a great deal to Matt’s backstory with Stick, who also trained Elektra as a child.

Although the Hand is loosely portrayed as a cult, its main role is to provide Daredevil and Elektra with people to punch. If you want to hear about a real cult, look no further than Stick and the Chaste. Stick’s child-rearing strategy involved emotional abuse, abandonment, and weird monologues about how only the chosen few can prevent the impending apocalypse: classic cult brainwashing fare.

Matt and Elektra’s personal journeys are both about breaking free from Stick’s teachings and then getting sucked back in. After falling back in love with Matt, there’s a brief period when Elektra wants to leave Stick’s influence, but she’s hampered by the belief that she’s an intrinsically bad person—a belief that originated with her killing someone at the age of 12, encouraged by Stick.

As for Matt, his training is constantly at odds with his natural urge to care for people. His bond with Foggy encouraged him to stay on the straight and narrow, but once Stick and Elektra embroiled him in their war with the Hand, he became isolated from his “real” life. (Another very effective strategy to get people invested in your creepy murder cult, by the way.)

In the absense of Foggy and Karen, Matt transferred his emotional energy over to Elektra and Stick, which is why Elektra’s death is the final nail in the coffin of his former life.

The real kicker is that while he won plenty of hand-to-hand fights with individual ninjas, he’s lost sight of why he became Daredevil in the first place. Is he fighting crime? Not really—the police aren’t exactly arresting busloads of ninjas after Matt knocks them out. Is he helping people? That’s debatable, because the show never illustrates how the Hand might influence daily life in Hell’s Kitchen. Most importantly, did he prevent the Hand from carrying out any evil plans? Not noticeably.

So by the end of season 2, we’re left with one of the most tragic losers in superhero history: Matt Murdock, friendless and bruised, and with no clear path to victory or happiness. If you thought the first two seasons were dark, we can’t imagine how depressing the next one will be.