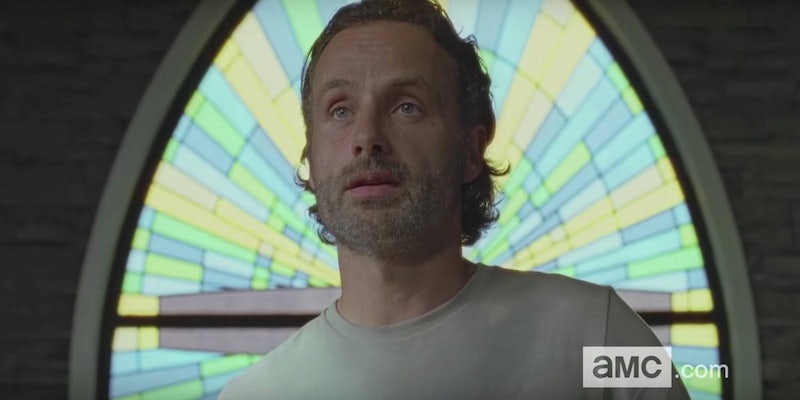 The 12 best ‘The Walking Dead’ quotes

These incredible moments are worth revisiting.

The Walking Dead is not a happy show, but the first half of season 7 was possibly the bleakest point yet. The latest villain, Negan, brutally assumed total control and fully humiliated Rick and the group in the most gruesome ways possible.

But the show has never skimped on great character moments. From philosophical monologues peppered with vulgarity to gritty, epic one-liners, we’ve been treated to some fantastic quotes from our group of survivors over the years.

So as we wait for the coming war against The Saviors, let’s take a look back at some of the show’s best quotes.

1) “They’re gonna feel really stupid when they find out… They are screwing with the wrong people.” — Rick

During the season 4 finale, when the group is trapped in a train-car, surrounded by flesh-eating cannibals from Terminus, all hope looks lost. Then our grizzled fearless leader Rick Grimes delivers this epic line. It’s enough to make you want to run through the wall for the man, or at least go out and buy the Blu-ray to hear the full line with its intended F-bomb (edited out for TV).

2) “You can breathe. You can blink. You can cry… Hell, they’re all gonna be doing that.” —Negan

After the Governor, it seemed difficult to imagine The Walking Dead conjuring another villain as frightening or as memorable. Enter Negan, the badass leather daddy with a predilection for unconventional sports equipment. His introductory monologue displayed the character’s affinity for colorful language and threats that were as barbed as his baseball bat Lucille.

The most compelling thing about Rick Grimes is that he’s got some areas of gray in his personality, not just his beard. When he’s evaluating the group’s options shortly after taking residence in Alexandria, he realizes that despite the hospitality he’s been shown, his group is still stronger than they’re being credited for. It’s that kind of bad-assery that keeps us on board.

4) “Well, pardon me young man, excuse the shit out of my goddamn French, but did you just threaten me?” — Negan

When Rick’s son Carl holds two of Negan’s Saviors at gunpoint, we’re not sure how Negan will react. Is he going to back off, or find a way to flip the tables and kill Carl? As it turns out, Negan is kind of charmed by Carl’s willingness to make an aggressive move. It might be a dumb move, but if there’s one thing Negan respects, it’s balls.

5) “Simply put, there’s a vast ocean of shit you people don’t know shit about. Rick knows every fine grain of said shit… and then some.” — Abraham

We could probably fill this entire list with Abraham quotes. This line from season 5, when Abraham is one of the only group members to stand up for Rick’s leadership, nicely sums up everything we like about our favorite redhead’s particular brand of vulgar wisdom.

Next time some Ferris Bueller type tells you to take it slow and look at the flowers, make sure you’re watching your back. Lizzie may have been a mentally challenged young girl, but after she proved herself to be a danger to the group, there was no choice but to take her out. Carol did it in the most humane way she could, but that doesn’t mean we still weren’t hit straight in the gut by this unforgettable moment.

7) “You really think you’re gonna take this community from us. From Glenn? From Michonne? From Daryl? From me? Do you have any idea who you’re talking to?” — Rick

The show is at its most rousing when Rick is in bad-ass mode, and this line from the season 6 opener is one of the very best examples of that. We’d recommend not forgetting who it is you’re talking to.

8) “If I had known the world was ending, I would’ve brought better books.” — Dale

Good ol’ Dale may not have been long for the world of The Walking Dead, but his homespun wisdom and kindness were instrumental to shaping the group into one that would last as Rick found his bearings as a leader. This quote is a light-hearted reminder that the apocalypse isn’t something that can be adequately planned for, and everyone is simply doing their best in trying times.

9) “Have you ever had to kill people because they had already killed your friends and were coming for you next? Have you ever done things that made you feel afraid of yourself afterward? Have you ever been covered in so much blood that you didn’t know if it was yours or walkers’ or your friends’? Huh? Then you don’t know.” — Michonne

Michonne is one of the most bad-ass characters on The Walking Dead, and that’s saying something considering how the show is basically entirely hard-nosed survivors at this point. Michonne generally fits the mold of the strong silent type, but when she decides to talk, her words are powerful, like when she’s admonishing Heath in season 6 about tough choices.

When the group is trying to help Rick decide on a name for his new baby girl in season 3, at first Carl suggests naming his new baby sister after deceased group members like Sophia or Carol. Before they decide to call her Judith, Daryl gets one of his warmest moments of the series by jokingly naming the baby Li’l Ass Kicker.

11) “Adolescence is a 20th century invention.” — The Governor

During season 3, The Governor dismisses the idea of “boys and girls” from Milton as he’s recruiting soldiers for his seemingly-idyllic community in Woodbury. This quote gets to the heart of one of the series’s longest-running themes: Survival of the fittest means the characters must shed comforts they once took for granted, like the innocence of childhood. Although the Governor is eventually defeated, his worldview is not necessarily toppled—one just needs look at the evolution of Carl for proof.

One of the sweetest lines in the entire series, Rick offers this kindness to Daryl during a trying moment in season 4. But the quote isn’t great just because it’s warm—it’s because it’s foreboding. Rick and his best friend Shane regarded each other as brothers in the beginning of the series, and that didn’t end very well. Neither did things turn out ideally for Daryl’s actual brother Merle, who defected to The Governor in season 3 before returning to help Rick’s group and dying in the process. Hopefully Rick and Daryl’s brotherhood doesn’t end with one of them tearfully stabbing the other out of zombified existence.