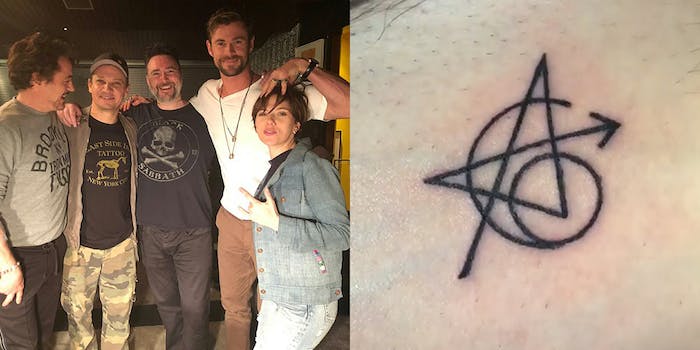 Five of the six Avengers got the tattoo—and then they tattooed the artist.

The Lord of the Rings cast famously got matching tattoos after they finished filming the trilogy back-to-back, and with Avengers 4 arriving next year, some of Marvel’s biggest heroes have now decided to get matching tattoos of their own.

Five of the six actors who played the original Avengers—Robert Downey, Jr., Chris Evans, Chris Hemsworth, Scarlett Johansson, and Jeremy Renner—all got a special Avengers tattoo designed by East Side Ink Tattoo’s Joshua Lord. (Mark Ruffalo was the only Avenger to skip out.) The tattoo is a simple one: It’s the Avengers “A” with an arrow intertwined with the number “6.” But for the actors, who’ve been part of that team since 2012’s The Avengers (and part of the MCU even before that), it’s marking the end of an era.

According to Downey Jr., Johansson got the idea for the original Avengers to get a matching tattoo. But getting it turned out to be easier said than done, logistically. Even in the midst of promoting Avengers: Infinity War, they were still scattered across the country. Johansson and Evans—who’s currently performing in Lobby Hero—had the tattoo done in New York while Lord flew to Los Angeles to tattoo Downey Jr., Renner, and eventually Hemsworth.

But then each of the Avengers turned the tattoo gun on Lord, who ended up being the sixth person to receive the tattoo after Mark Ruffalo didn’t join in.

“And each one of us drew a line on the artist with his own tattoo gun and it was a total massacre,” Downey Jr. told Entertainment Weekly. “Each of us contributed to giving the tattoo artist the sixth tattoo that he designed for us.”

The Avengers have plenty of talents and powers between each of them, but tattooing was probably never one of them. Still, it mostly turned out alright.

Well team, we did it…? Thank you @joshualord for sharing ink with us all @avengers much love #eastsideink #bondedforlife @robertdowneyjr @chrishemsworth #chrisevans #scarjo #loveUall

And even Evans is able to look back and admire his work.

Thanks for the ink, Joshua Lorde!(and for letting all of us maim you in return) Love to @RobertDowneyJr @Renner4Real @chrishemsworth Scarlett (we just need to get Ruffalo blackout drunk) ❤️ pic.twitter.com/mNtJ6xCyOP

We don’t know how Avengers 4 will fare for any of our heroes, but after all the dust is settled, they’ll always have their tattoos.