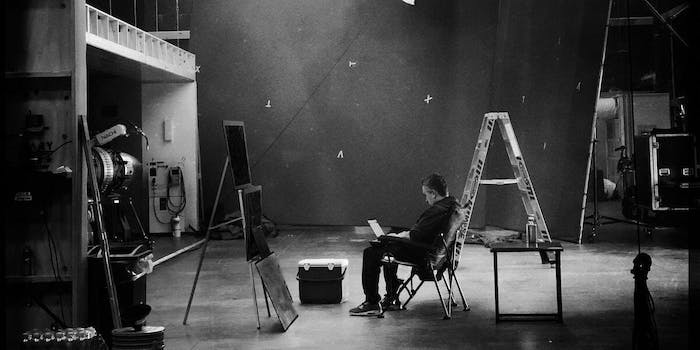 Can you spot what they're hiding?

Avengers 4 directors the Russo brothers are having some fun at the expense of fans’ imaginations and conspiracy theories. The duo on Wednesday posted a black-and-white photo assumedly from the set of the still-untitled Avengers film with the caption: “Look hard.”

The photo features someone sitting in a fold-out chair (possibly the more salt-and-pepper-haired Joe Russo) in the middle of a studio, underneath what looks like a giant set of lights and a wall with some markings on it.

But fans are stumped as to what they’re supposed to look for. The strongest theory at the moment is the ladder to the person’s right, which forms an A, and a large box with markings that look like an E further to the right. Avengers Eternal? Avengers Endgame? Your guess is as good as ours. Some fans are also pointing out the water bottle to the right, but the text on it is too blurry to zoom in on. You may also notice the letters and symbols on the black wall in the background.

Twitter was quick to share its own theories, from the whacky to the downright eerie—did this have to do with Drax? Or maybe Homer Simpson?

Here’s one of my favorites, if only because it’s string-on-a-corkboard unhinged. User Patrick Smith manages to draw out individual letters that spell out “endgame” from all the minutia and structure of the set. Considering the Avengers will be forever changed after this movie, it stands to reason that “endgame” could be the chosen subtitle for this film.

If you need a refresher on the Marvel Cinematic Universe’s timeline of events, check out our comprehensive rundown of everything you need to know. And don’t forget to read up on why Brie Larson is punching old ladies in the face in the new trailer for Captain Marvel.

As for the fourth Avengers film, we’ll find out what happened to all that dust next year when it hits theaters.