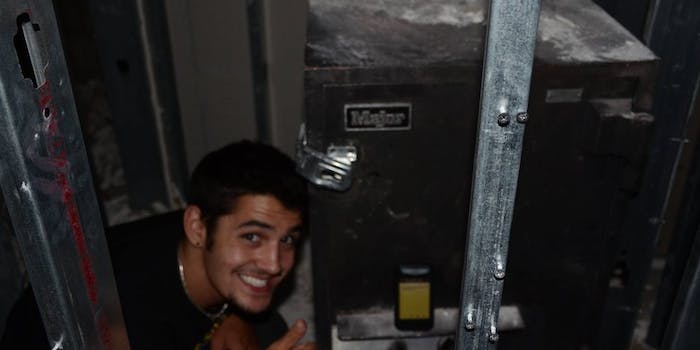 The contents of a mystery safe found in a building which once housed a casino could shed light on a 40 year old mystery.

For years, the greatest legacy left by Nevada casino owner Richard Chartrand were the mysterious circumstances surrounding his death. Chartrand was backing out of his driveway one day in 1968 when a bomb under his car exploded, killing him.

Now another layer has been added to the mystery, and it’s playing out on social news site Reddit. Construction workers have found a four-foot high safe, secreted away under a staircase in one of Chartrand’s old casino buildings.

And tomorrow, redditors could be the first to see what’s inside.

According to the Tahoe Daily Tribune, Mike Laub, an attorney who purchased Chartrand’s old Lake Tahoe casino building in 2010, found the safe while renovating last week. No one knows who owned the safe, as the building’s changed hands several times since Chartrand died in 1968.

Mike Laub’s teenage  son, Jordan, is apparently a redditor. He’s promising to open the safe live for Reddit on Friday (or maybe Monday, according to his mother).

Laub, posting under the name secretsafe, made the announcement late yesterday on the site’s r/IAmA section, where it’s vied for the top spot there for most of the day today.

Turning to Reddit’s often helpful userbase has already paid off for Laub. Initially he wanted to use a blowtorch to open the safe. That wasn’t such a good idea, redditors suggested, because things like cash and bearer bonds are made out of, well, paper. They don’t react well to an open flame.

So Laub is going the safer route: a locksmith (Laub’s mother told him their first choice can’t come until Monday, so he’s scrambling to find another by tomorrow).

Could it all be a hoax? Laub didn’t reply to an interview request from the Daily Dot. But he did include photos of the safe in his post on Reddit. Those looked strikingly similar to the photo in the Tahoe Daily Tribune photograph.

So what’s inside? We’re skeptical. It could just be another Al Capone’s vault, revealing nothing but some cobwebs and disappointment.

Still, others are connecting the obvious. A casino owner, a car-bombing, and a long-lost safe: could it all have a connection to the mob?

“I am not worried about the mafia,” he wrote.

Friday update: Jordan Laub now says he will open the safe on Tuesday.