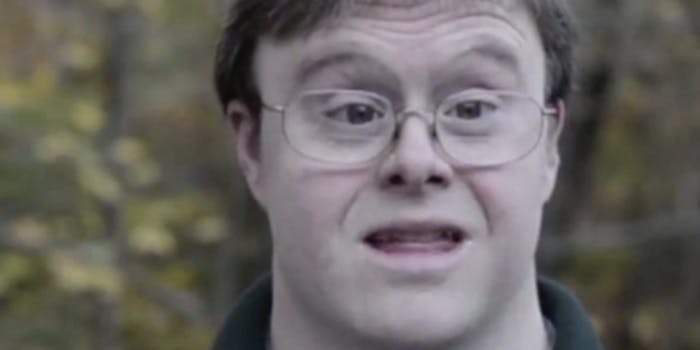 An open letter to Coulter from John Franklin Stephens, a blogger and Special Olympian with Down Syndrome, has won the hearts of the Internet.

After Ann Coulter called President Obama a “retard” on Twitter, the Internet exploded in retaliation against her choice of words. Today, one voice has become the loudest.

That voice belongs to John Franklin Stephens, a 30-year-old blogger and Special Olympian with Down Syndrome from Fairfax, Virginia. In an open letter to Coulter posted on the Special Olympics blog, Stephens questions Coulter’s remark. Unlike a majority of those upset, however, he does not address her with hateful vocabulary or death threats.

“Come on Ms. Coulter, you aren’t dumb and you aren’t shallow.  So why are you continually using a word like the R-word as an insult?,” the letter begins.

After identifying himself as a man who suffers from mental retardation, Stephens presses Coulter on what definition of the word “retard” she was implying.

“I thought first of asking whether you meant to describe the President as someone who was bullied as a child by people like you, but rose above it to find a way to succeed in life as many of my fellow Special Olympians have.

Then I wondered if you meant to describe him as someone who has to struggle to be thoughtful about everything he says, as everyone else races from one snarky sound bite to the next.

Finally, I wondered if you meant to degrade him as someone who is likely to receive bad health care, live in low grade housing with very little income and still manages to see life as a wonderful gift.

Because, Ms. Coulter, that is who we are – and much, much more,” he wrote.

Stephens closed the letter by stating that Coulter’s word choice, which he assumes was meant as an insult, is instead a terrific compliment, a “badge of honor.” He even invited her to attend a Special Olympics event and “see if you can walk away with your heart unchanged,” before signing his message “a friend you haven’t met yet.”

While Coulter has yet to respond publicly to the letter, Stephens’ sincerity has made him an overnight hero.

“This is amazing. You are amazing. If only there were a million more yous in the world. It would be so much better. xo” commented Allison Starnes Zapata on the Special Olympics blog.

“Just read the letter John Stephens wrote to Ann Coulter regarding her tweet about the President. Trying really hard not to cry at work…” tweeted Mariam Mustafa.

“I’m ashamed to say I could never be this civil with Ann Coulter” user ondaren wrote on reddit, where the letter received over 22,000 upvotes.

Stephens is no stranger to retaliating against the word “retard” as an insult. In 2008, he wrote an opinion piece for the Denver Post detailing why usage of the word hurts him.

UPDATE: Stephens read his letter on camera for Ora.TV’s Newsbreaker. Here’s the video: