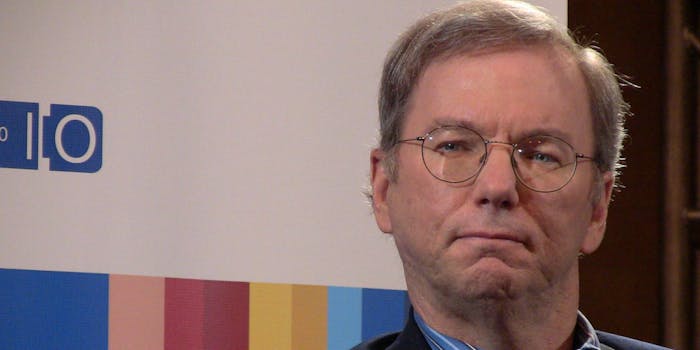 The terms “are unequivocally associated with people looking for child abuse images."

Executive chairman Eric Schmidt announced yesterday in an op-ed for the British tabloid Daily Mail that a three-month, 200-person initiative at Google has produced new technology to aid in the global fight against child pornography.

Working with the U.K.’s National Crime Agency, Google has developed a list of more than 100,000 search terms in 150 languages. MP Claire Perry, government advisor on childhood, sought to assuage concerns that such action would lead to over-regulation of the Internet. These terms, Perry told the Telegraph, “are unequivocally associated with people looking for child abuse images. It is those terms that we have asked the search engines not to make any returns against.”

An additional 13,000 search queries will now bring up warning messages “from both Google and charities,” Schmidt wrote, informing the user that child pornography is illegal and offering information on how to get help.

Schmidt also outlined his company’s intention to work with NGOs like the Internet Watch Foundation in the U.K. and the National Center for Missing and Exploited Children in the U.S., offering not only to lend computer engineers to both organizations but also to fund engineering internships.

Still, something is, perhaps, better than nothing. Prime Minister David Cameron, who this summer called for British ISPs to ban all adult content, praised the move as “a really significant step forward.” Microsoft is expected to announce a similar plan today, the Telegraph reports. Microsoft and Google together account for 95 percent of search traffic.

Google’s efforts, however, will not be entirely algorithmic. “Computers can’t reliably distinguish between innocent pictures of kids at bathtime and genuine abuse,” Schmidt conceded. “We always need to have a person review the images.”