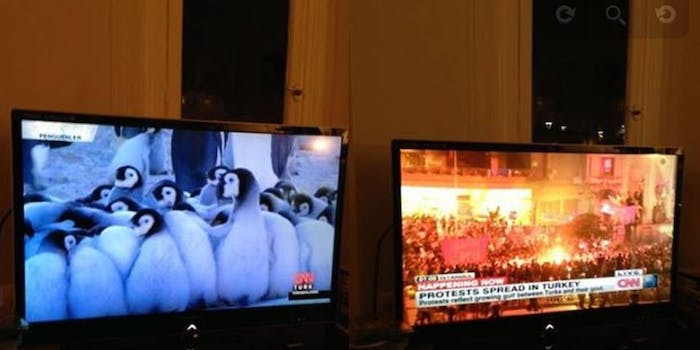 While masses of protesters battled police armed with tear gas bombs in Istanbul Saturday, CNN-Turk chose instead to air an episode of Spy in the Huddle, a three-part documentary on penguins.

The broadcast poured lighter fluid on online accusations of a countrywide media blackout over riots in Taksim Square, where demonstrators protested a government initiative to turn a park into a shopping center and army barracks.

Seriously, CNN-Turk is airing a show on penguins.

A follower responded with a photo of a television: A comparison shot of CNN-Turk’s and CNN International’s coverage popped up on occupygezi.tumblr.com: 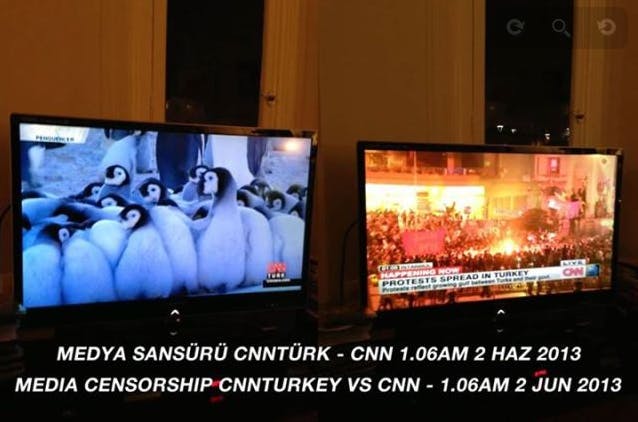 Why does CNN international show live coverage of the protests in Turkey, while CNN Türk show a documentary on Penguins? How is this even possible? How can it ignore the police brutality—there are dozens and dozens of clips? How can it not show the broad sections of Turkish society, when the PM says it is only a group of radicals. How can it collude with a government obviously out of control? Yesterday the PM admitted the police had overacted and there will be investigations. And today? It continues all over Turkey.

CNN advertised the broadcast on May 31. Meanwhile, this was happening in Taksim Square:

On Sunday, Turkish Prime Minister Recep Tayyip Erdoğan called social media a “nuisance.” This might be why: Facebook has become one of the only reliable means of spreading information. This video, of police surrounding and beating an unarmed women, has been shared more than 30,000 times.

As of June 2, the violence continues:

Police are lobbing more tear gas over the barricade, protesters continuing to build it up in Besiktas – violence has to stop


Yaprak Ünver contributed to this report.