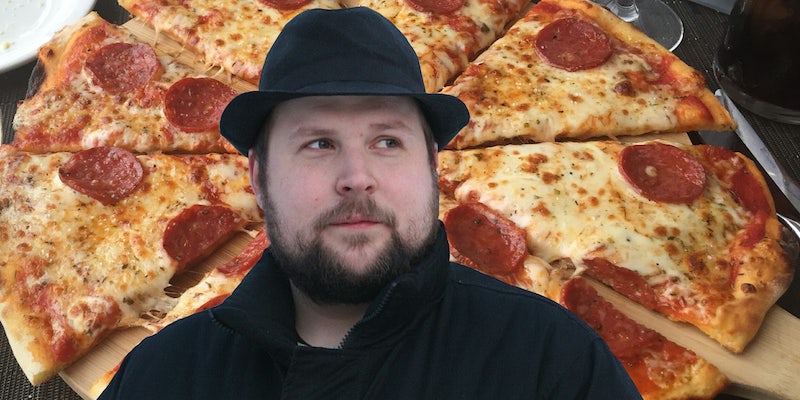 Minecraft's creator is under fire for enabling parts of the Pizzagate conspiracy theory.

Minecraft creator Markus Persson, better known as “Notch,” produced one of the most successful video games in the industry’s history. But these days, Persson is best known for his controversial tweets.

Case in point: Persson sent out a series of tweets over the weekend alleging that the right-wing conspiracy theory Pizzagate is real.

Persson’s Pizzagate comments kicked off on Friday evening after the developer turned to Twitter to share his thoughts on the conspiracy.

“(pizzagate is real),” Persson tweeted. The original tweet has since received over 2,600 retweets and 6,400 likes.

Reporter Brian Patrick Byrne later contacted Persson regarding his views on Pizzagate. (Disclosure: Byrne also contributes to the Daily Dot.) Notoriously critical toward reporters, Persson dodged the question on whether he thinks Pizzagate is real, instead arguing that people “are picking one of two sides emotionally in this incredibly insanely huge binary split, much like politics.”

Hi, Reporter. My beliefs are if you mention it your tweet gets a lot of attention, even more than saying punching is bad.

I feel more like people are picking one of two sides emotionally in this incredibly insanely huge binary split, much like politics.

Nuance is lost when you're with or against us, and reality is nuanced. If you reject reality, nothing actually changes, you just lose power.

Nope. Define it in public, right here. I will reply per point if I have seen evidence for it or not, and if I'm for or against that behavior

Pizzagate is notoriously toxic, with Reddit banning the r/Pizzagate subreddit and InfoWars’ Alex Jones even apologizing for encouraging the theory. In late 2016, the conspiracy theory led to one North Carolina man storming Comet Ping Pong, pointing his weapon at a worker, and firing his rifle inside the restaurant.

So for Persson to call Pizzagate “real,” even jokingly, raises major concern that the theory may impact the Minecraft community, which is primarily composed of children, pre-teens, and adolescents.

Persson does seem to agree with parts of Pizzagate, according to his tweets. He argues that John Podesta and his brother, lobbyist Tony Podesta, may have used “suspect codewords” in their leaked emails. He also claims that “a list of children (with ages included)” for a “heated pool party” is suspicious in one email, suggesting that there may be credence to some parts of the Pizzagate theory.

Wrong. People are saying there's a lot of suspect codewords including the word "pizza". That place has very disturbing art and social media

(the HW doesn't allow for extrenal food). Also, a list of children (with ages included) are specified for a "heated pool party".

Persson also alleges people who are investigating the Podestas and Clintons “keep dying,” further suggesting that “a LOT of people who investigate trafficking or try to expose pedophilia rings either vanish, kill themselves in impressive ways, or vanish from public life.”

The podestas appear very similar to a police sketch issued in connection to the disappearance of a child. People who investigate keep dying.

The thing people find disturbing about the clintons is how people keep dying around them. Lots of suicides. In addition, a LOT of people

who investigate trafficing or try to expose pedophilia rings either vanish, kill themselves in impressive ways, or vanish from public life

More than anything, though, Persson believes Pizzagate isn’t about pedophiles. He points to drugs and political collusion as the real source of the theory.

My guess is drugs

Yes, I agree. I've said that's an extreme and unfounded conclusion based on what I've seen. I think it's drugs and collusion. https://t.co/Pn4yQo4umv

Pizzagate isn’t the only conspiracy theory that Persson entertains. He believes the mainstream media is trying to develop a “race war,” one that the left-wing and right-wing are both embracing. And the Minecaft creator proceeded to slam the media for focusing on “actually proven conspiracy theories” like “the Russia nonsense” over Pizzagate.

“And the kicker is that none of this gets reported in the media,” Persson said. “People focus on actually proven conspiracy theories like the Russia nonsense. A very obvious attempt at a race war is being manufactured by the media and the god damned retarded alt-right and alt-left fuel that fire.”

And the kicker is that none of this gets reported in the media. People focus on actually proven conspiracy theories like the russia nonsense

A very obvious attempt at a race war is being manufactured by the media and the god damned retarded alt-right and alt-left fuel that fire.

Suffice to say, Persson’s Pizzagate beliefs were met with some highly contentious responses. The Guardian’s Leigh Alexander has since coined the term “gone full Notch” to describe Persson’s fall from grace.

Others pointed out that Persson has a long history of terrible opinions on the internet, including previously calling for a “straight pride” parade. For them, Persson’s Pizzagate ideas are par for the course.

Minecraft guy complains people are calling him crazy when he's a pizzagate moderate who thinks the campaign emails are about drugs pic.twitter.com/Hz28YCIJy8

My favorite is when he said people who hate "straight pride" are cunts and should be shot. When people explained what Pride was actually…

…about, he admited he'd misunderstood and was wrong, but instead of apologizing, he promised not to learn from it because "I'm Notch".

Fucking of course. Notch is the epitome of stupid goddamn opinions. https://t.co/MCKasDhri9

Persson sold Mojang, the studio that created Minecraft, to Microsoft in 2014, and he’s since reported feeling isolated while being rich. His notorious Twitter opinions may just stem from a deeper issue than political beliefs, like alienation from a cold, wealthy world.

Persson did not immediately respond to the Daily Dot’s request for comment.