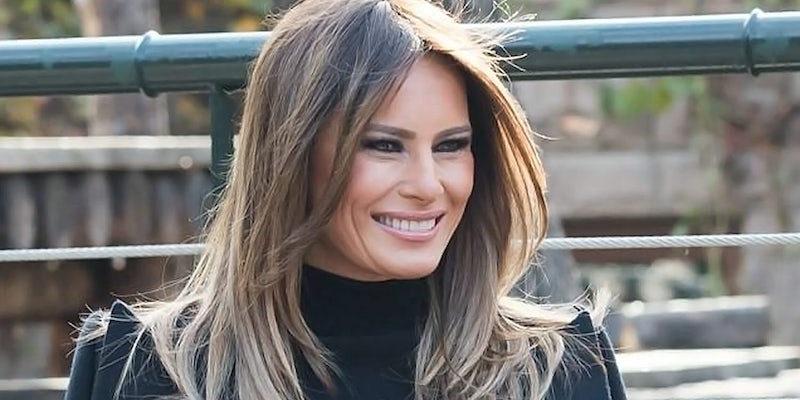 The pastor said she refused to enter the White House until the ritual took place.

If a pastor from Indiana is to be believed, Melania Trump ordered the White House to be “completely exorcised” and purged of “demonic” artifacts before she moved in.

Paul Begley is a right-wing pastor who hosts a weekly radio program called “Coming Apocalypse.” He appeared on Sheila Zilinksy’s Weekend Vigilante podcast on Friday and explained that the first lady (who has said she is Catholic) may have influenced the president’s prayer routine. (The discussion about Melania’s alleged exorcism starts around 23:30 in the linked video.)

“When the president allowed 40 pastors to come into the White House and anoint him with oil and lay their hands and pray on him—seven times he’s done this—that is unheard of,” Begley said. “At least he is humble enough and recognizing that he needs God enough that he keeps bringing them in for the prayer. And I’ve got to say this, it might have started with the first lady.”

He went on to say that she ordered the White House “exorcised” during President Donald Trump‘s inauguration.

“The first lady, in that five hours when the Obamas and the Trumps went down to the Capitol and Trump was being sworn in as the 45th president of the United States,” Begley claimed, “Melania Trump said to her husband, ‘I’m not going to go into that White House unless it has been completely exorcised.’”

Begley said that the first lady requested the exorcism because when the Obamas lived at the White House, “all kinds of idol gods and images and all kinds of artifacts in there that were demonic.”

“Melania said, ‘You’ve got to get all of that out of there and send in some preachers and priests… to go in and cleanse the White House or I will not spend one night in it,'” Begley said. “During that five hours when they were ripping out carpets and changing drapes, there were people in there packing up every idol. The only thing that was left, Sheila, was one cross on one wall. They cleansed the White House. They had people in there anointing it with oil and praying everywhere.”

A great deal of speculation surrounded Melania Trump’s decision to live in a New York penthouse for the first months of Donald Trump’s presidency. She moved into the White House in June.

Looking forward to the memories we'll make in our new home! #Movingday pic.twitter.com/R5DtdV1Hnv

It’s unclear if Melania has had any qualms about demonic energies since taking up residence at the White House. However, over the holidays, people noticed the Trumps’ Christmas decorations had a particularly dark tone.

Why does the White House Christmas decorations look like the lair of a Disney villain? pic.twitter.com/PMFoNkGjPC