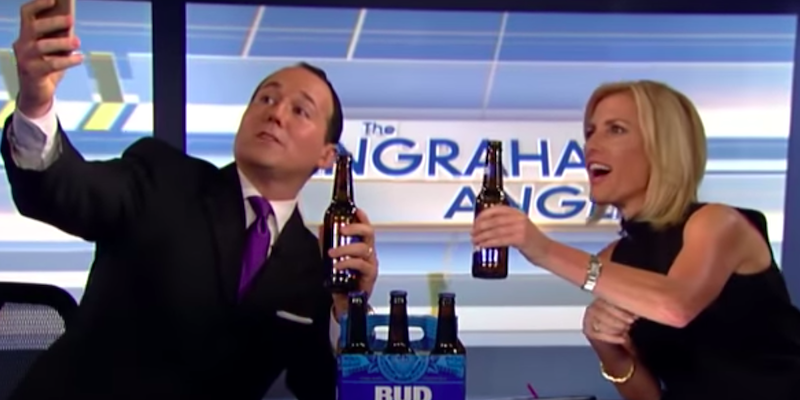 Contributor Raymond Arroyo fell off his chair in a stunt.

If you were watching Fox News on Friday night, you might have managed to catch The Ingraham Angle with host Laura Ingraham.

In the show’s “Friday Follies” segment, Ingraham and contributor Raymond Arroyo covered the week’s topics, including Brett Kavanaugh protests and selfie deaths. At the very end of the segment, Arroyo pulled out a six-pack of Bud Light as a mocking nod to the anti-Kavanaugh protesters who brought red Solo cups and chanted “I like beer” near Sen. Majority Leader Mitch McConnell’s D.C. home.

Arroyo claimed that the protestors were drunk when they marched on McConnell’s home at 7:30am, and he expressed sympathy for McConnell for having to endure the protests at such an early hour.

As Ingraham was preparing to end the segment, Arroyo pulled out the brewskis, saying, “I thought, just to bring it all together, Laura.”

“I like beer,” Ingraham replied. Arroyo pulled out his phone to snap a photo of the two—apparently in reference to this selfie statistic—saying, “Smile. Do we have it? Wait …”

Ingraham then urged him to move to the edge of his seat, which caused Arroyo to fall.

Keeping with the joke, Ingraham frantically asked the medic to check on Arroyo. “Help him,” she said.

But in reality, the fall was actually a fake one—a planned stunt.

“For all of you concerned viewers, @RaymondArroyo’s fall during our Kavanaugh-Toast selfie was a JOKE…a pratfall after a long week,” Ingraham said in a tweet on Friday night. “#Laughter #selfiecide.”

But that didn’t stop Fox News viewers from freaking out online.

I’m concerned. Is @RaymondArroyo OK after the fall? @IngrahamAngle

What just happened to @RaymondArroyo – did he just fall on the floor and you just kept going? LMAO

Did you mean to fall out of your chair, @RaymondArroyo ? I am hoping you simply were illustrating the point about selfies!

That fall didn't look good at all, with a beer in his hand, nonetheless…! #hopehesOK

I saw you fall Raymond and now I am worried about you! @IngrahamAngle

Are you all right after your fall? We kept hearing Laura Ingraham telling you to get closer to the edge. Sounds like a lawsuit to me.

But some were in on the joke:

Whoever took that fall seriously did not watch the previous segment where they said 250 people die from taking selfies. You guys need to stop watching clips from YouTube and actually watch the whole show before making judgements.

I saw you extend your arm to soften the fall. I got it.

During the segment, Ingraham and Arroyo also mocked diversity on corporate boards and laughed at more Kavanaugh protests.