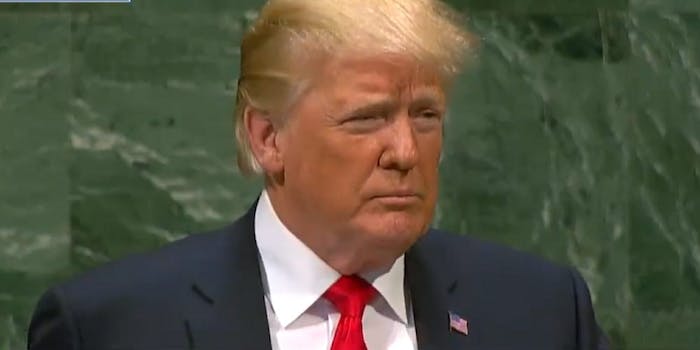 After a misleading edit, the internet has a field day.

U.S. President Donald Trump faced a round of laughter from world leaders Tuesday afternoon at the United Nations General Assembly after boasting that his presidency “has accomplished more than almost any administration in the history of our country.” This hiccup didn’t bother Fox News, however, which promptly cut out the laughter on Twitter. And Fox News edits like this aren’t so uncommon.

During Trump’s UN speech to the assembly, Fox News uploaded two clips that circumvented the awkward moment. In the first clip, Fox cut off Trump’s speech as soon as he finished saying that the U.S. has accomplished more than any other presidential administration.

Three minutes later, Fox posted a second excerpt for viewers, this time beginning right after the uncomfortable moment had ended. This effectively cut out the entire moment, from world leaders snickering at Trump to the entire assembly bursting out in laughter. For Fox viewers checking their Twitter timelines during the event, it was almost as if the moment had never happened at all.

Fox ‘s Twitter account did not acknowledge the clip until around 11pm CT on Tuesday night, where Fox News contributor Richard Fowler called the laughter “hurtful.”

.@Richardafowler: "What was hurtful for me at least is to watch the global world, the developed world, laugh at the United States." @foxnewsnight https://t.co/kUoIz9rDeS pic.twitter.com/J4PlI2JEuU

It didn’t take long for Twitter to call out Fox for its bizarre decision to cut out the laughter.

Wait. Wouldn't a news organization show the whole thing? It's almost as if Fox is a propaganda machine rather than a news outlet.

@FoxNews truly is the most fake news.

At this point it would literally be shocking if they *didn't* edit out the laughs.

How is that not a journalistic scandal? https://t.co/8Fi1PpqezA

To make him look good, wouldn't you also have to cut out Trump? Maybe key in @CoryBooker? Or @MikeTrout? Or, as @parkermalloy suggested, #Gritty? pic.twitter.com/WvFrpJRuOz

Many believe the decision represents a much larger problem with Fox’s cult of personality over Trump, even though his approval rating remains particularly low.

Want to see another example of state media? Look below. https://t.co/KY4GMsWwZI

Hahahaha! Seriously, though. #Fox watchers: aren’t you catching on to the manipulation? Will it ever get old? Also, the US is the laughingstock of the ENTIRE WORLD. https://t.co/WJRWX61ouH

Have there been other Fox News edits?

Fox News edits are pretty alarming, but not surprising. Even though the soundbite dominated American news throughout the day, the network largely avoids extensive coverage on stories that paint the Trump administration in a negative light. After special counsel Robert Mueller filed charges against 13 Russian citizens and three Russian companies for allegedly interfering with the 2016 presidential election, Fox only dedicated 4 percent of its airtime to covering the story during its first 12 hours, Vox reports.

“Fox’s pro-Trump shows acknowledge the news, yes, but they don’t give it the serious wall-to-wall coverage that it merits,” CNN’s Brian Stelter wrote. “Instead, the shows move on… to safer subjects like confederate statues and Dem ‘extremism’ and the VMAs.”