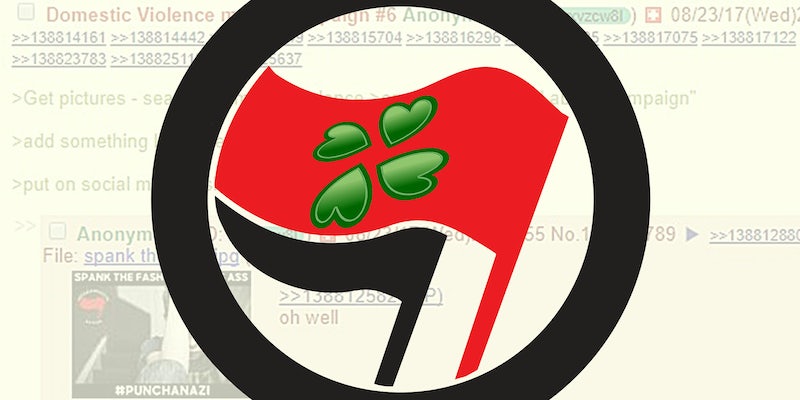 The smear campaign takes aim at the radical far-left network of anti-fascists, which has risen up in opposition to the Trump-era advent of the far-right and its willingness to use violence as a means of directly confronting white supremacist hate groups.

White Nationalists on 4chan start a fake social media campaign to smear #Antifa as promoting the targeting of white women for violence pic.twitter.com/xIsHzDWg4O

In the original post, which appeared on 4chan’s /pol/ message board, an anonymous user instructs others to find stock imagery depicting domestic- and child-abuse victims that can be emblazoned with the antifa logo and a slogan apparently justifying the physical violence depicted.

The post then suggests that the edited images are posted on Twitter under the hashtag #PunchANazi—the hashtag adopted by anti-fascists after inauguration day footage of “alt-right” white supremacist Richard Spencer being punched went viral.

A quick look at that hashtag feed shows that, within hours of the 4chan post going live on Wednesday night, it was overrun with fake antifa memes and hijacked by the subversive campaign.

Antifa's #punchanazi campaign seems to be working out well. pic.twitter.com/2dyZ5H9RIL

Many of the accounts posting the images appear to be associated with antifa—however, many of these are hoax accounts part of another elaborate disinformation effort by trolls to confuse and mock leftists.

The internet has become a new frontline for the two extreme political factions. In undermining one another, those on the far-left and far-right have engaged in mass doxing campaigns, exposing the identities and whereabouts of individuals associated with the opposition, and attempts to cut off one another’s online funding sources.