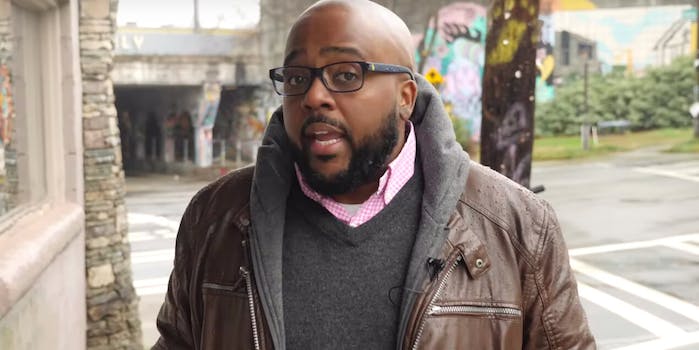 Black voters in support of Sen. Bernie Sanders (I-Vt.) are putting the world on notice with the new hashtag #BernieBruh.

On Wednesday, media personality Benjamin Dixon posted to Twitter a video with the caption, “Turns out, I’m not the only #BernieBruh.”

The clip showcases Black Americans emphatically expressing their support for Sanders and their reasons for backing him among a crowded primary field. The video disputes the often utilized stereotype that Sanders only has energetic support among “Bernie Bros,” or white men.

“I wanted to show my reality, which is an overwhelming response of Black people in my orbit (supporting) Bernie Sanders, ” Dixon told the Daily Dot.

In early February, a tweet from Dixon that contained unearthed audio from Bloomberg defending the stop-and-frisk policy sparked the trending hashtag #BloombergIsRacist.

In a retweet of Dixon’s #BernieBruh video, Sanders said he will beat President Donald Trump through a “multiracial, multigenerational movement for real change.”

#BernieBruh has spurred numerous posts of solidarity online. The video project included about 100 participants, according to the #BernieBruh website, and Dixon started a GoFundMe to help make more videos in support of Sanders.

A recent poll, according to NBC News, shows Sanders closely trailing former Vice President Joe Biden among Black Democratic voters, with Biden polling at 31% and Sanders polling at 29%. However, other polls have reported that Sanders gained the majority favor among Black voters.

Dixon’s video comes on the heels of MSNBC contributor Jason Johnson being temporarily benched by the network following remarks he made about the Black women on Sanders’ campaign team. Johnson said they were “from the island of misfit Black girls,” according to the Daily Beast. Black women who support Sanders have since turned Johnson’s words on their head, using them as a compliment rather than an insult.

The video also touches on the narrative that paints Black voters as singularly loyal to candidates like Biden and Michael Bloomberg. Dixon said he thinks ideology, rather than simply age, explains the correlation of who Black voters may choose to vote for.

Dixon said the #BernieBruh video is a way to disprove the media narrative he sees of Black Sanders supporters not getting enough recognition.

“He’s fighting for these issues, that all of us are looking at it. … So we rock with him,” Dixon said.