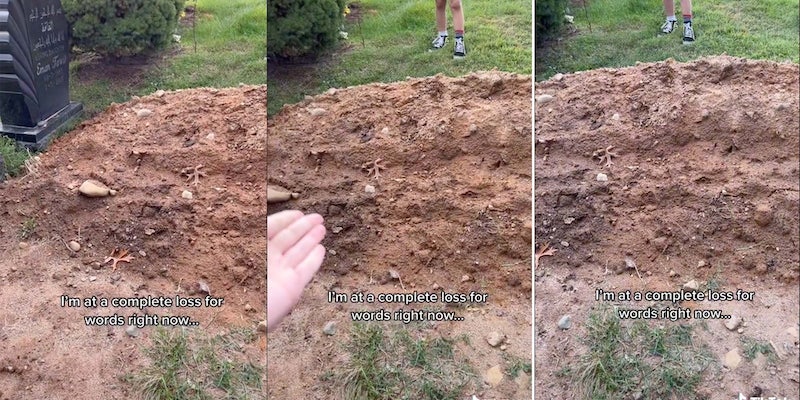 ‘I’m at a complete loss for words’: TikToker finds body buried on top of sister’s grave in viral video

No one had a clear answer as to why the grave was disturbed.

In a TikTok posted on Oct. 11, TikToker Jessica Tawil (@jesstawil) shows that another person’s body is buried on top of her sister’s grave. Her initial video has garnered 4.4 million views as of Tuesday.

“So I just came to the cemetery to visit my sister,” Tawil says. “I can’t,” she says, her voice breaking. Tawil wrote that she was “at a complete loss for words” in the video’s overlay text.

In a follow up video, Tawil shows an argument between a woman, presumably a representative from the cemetery, and Tawil’s father, who is asking why another body was buried on top of the grave the family bought.

“Every grave is different,” the woman says.

“I own this one,” says Tawil’s father. “How come you got money from someone to bury her above my daughter?” Tawil wrote that the plot was $12,000 in the video’s overlay text.

“So this is very emotionally charged,” the woman says. “Let’s go back to the office so we can speak to you intelligently.” Tawil wrote in the video’s overlay text that the woman didn’t provide them with any answers.

User @adrienne_themortician, who identified themselves as a mortician, commented on Tawil’s follow up video saying that she and her family have a “big lawsuit” on their hands.

“This is a huge no no,” they wrote. “Cemetery is completely at fault, do not back down!”

Another comment from @norma.virii.16 suggested that Tawil and her family “lawyer up.”

In a second follow-up video, Tawil says that the cemetery “removed everything.” She’s unsure if the body is buried lower in the ground, and says that the tiles that used to rest on top of her sister’s grave are gone.

“They tried to flatten everything out,” says Tawil. “I’m not understanding.”

“Disturbing a grave is illegal unless request thru court,” wrote @freestylemusic. “This is so emotionally traumatic for me to watch I can’t imagine what you’re feeling.”

In many states (such as Connecticut, North Carolina, and Florida), there are penalties for disturbing a grave.

In a comment on her second follow up video, Tawil confirmed that her family has hired a lawyer.

Tawil did not immediately respond to the Daily Dot’s request for comment via email.