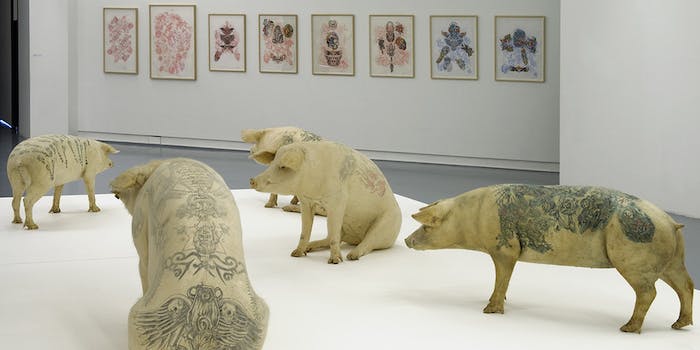 Artist Wim Delvoye quit tattooing pigs with Disney characters in 2010. But people are still furious about it.

How much would you pay for a Disney tattoo? What if it were on the back of a pig?

One controversial artist who formerly used live pigs for his most notorious canvases has come under fire for selling their pigskins—emblazoned with Disney art—for anywhere from $75,000 to a whopping $160,000 per pig.

The Belgian artist, Wim Delvoye, claims he gave up the practice years ago. But animal lovers still aren’t happy about the provocative use of pigs as art instead of bacon. 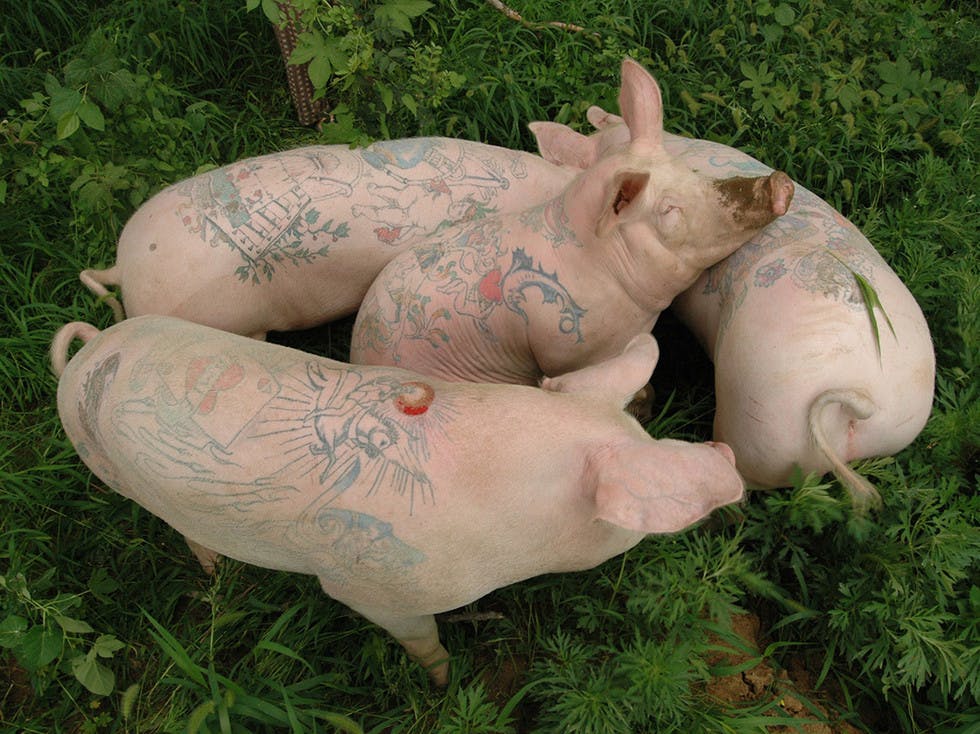 Delvoye is an artist, sculptor, designer, and tattooist with a long and controversial career. He’s shown his work in galleries and museums around the globe, including at the Louvre, where he displayed, among other things, a pair of bunny slippers made from actual bunny.

Delvoye uses many different materials and tactile expressions for his art—everything from stainless steel to stained glass. But before he entered a new phase focusing on combining classical art and architecture with modern technology, he had a particular fascination with pigs. In the past, he’s X-rayed pigs, as well as stuffed them and turned them into carpets. 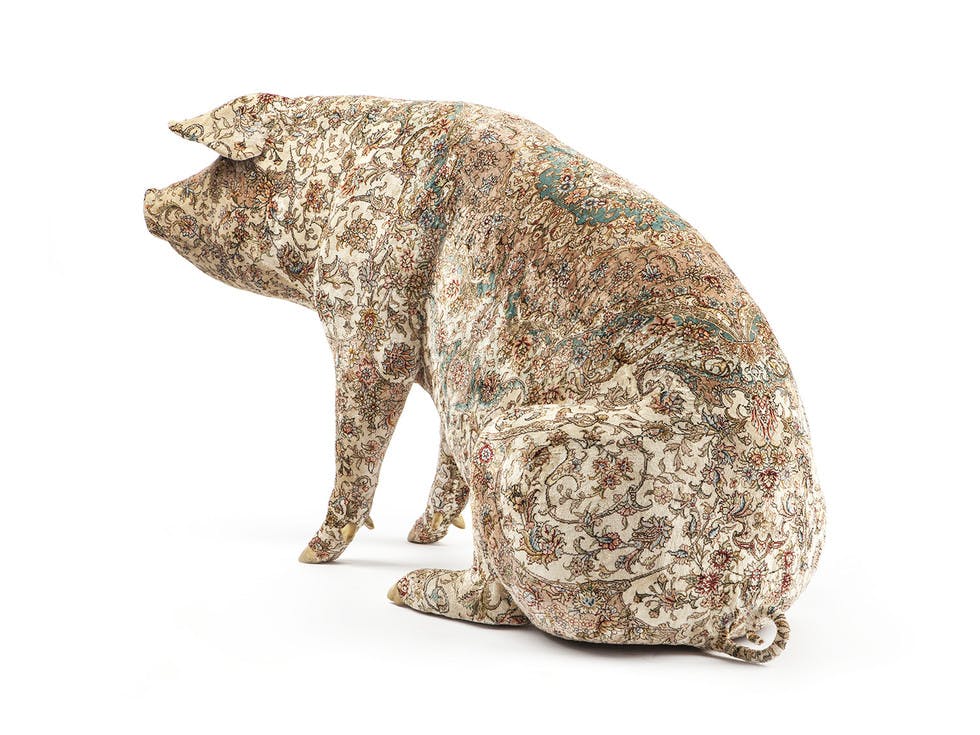 In 1997, Delvoye began tattooing live pigs before finding himself restricted under U.S. animal rights laws. He quickly established a base on an art farm near Yang Town, Beijing, where he raised the pigs, tattooed them, and eventually sold their skins for high prices.

“We have the same sort of skin. Tattooed pigs look like tattooed people.”

In 2008, Shanghai banned Delvoye’s pigs from its largest contemporary art fair. But the artist continued to raise, tattoo, and sell the pigs, fetching prices that reportedly ranged up to 1 million RMB, or nearly $160,000.

His more popular “designs” for the pigs included Louis Vuitton tattoos and an assortment of Disney art. 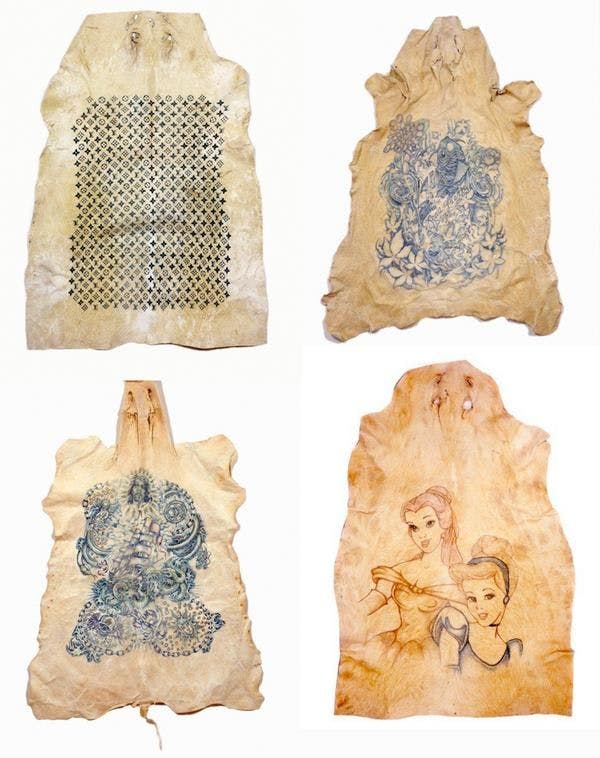 Delvoye’s controversial art—he once famously created a machine that simulates the process of human digestion—has won him many admirers. But increasingly, his treatment of pigs has drawn protest. In Germany last month, his showing of a stuffed, tattooed pig at the Hamburg Museum of Arts and Crafts provoked heavy criticism, with one report calling the exhibit “tasteless, irreverent, inhuman, perverted.” 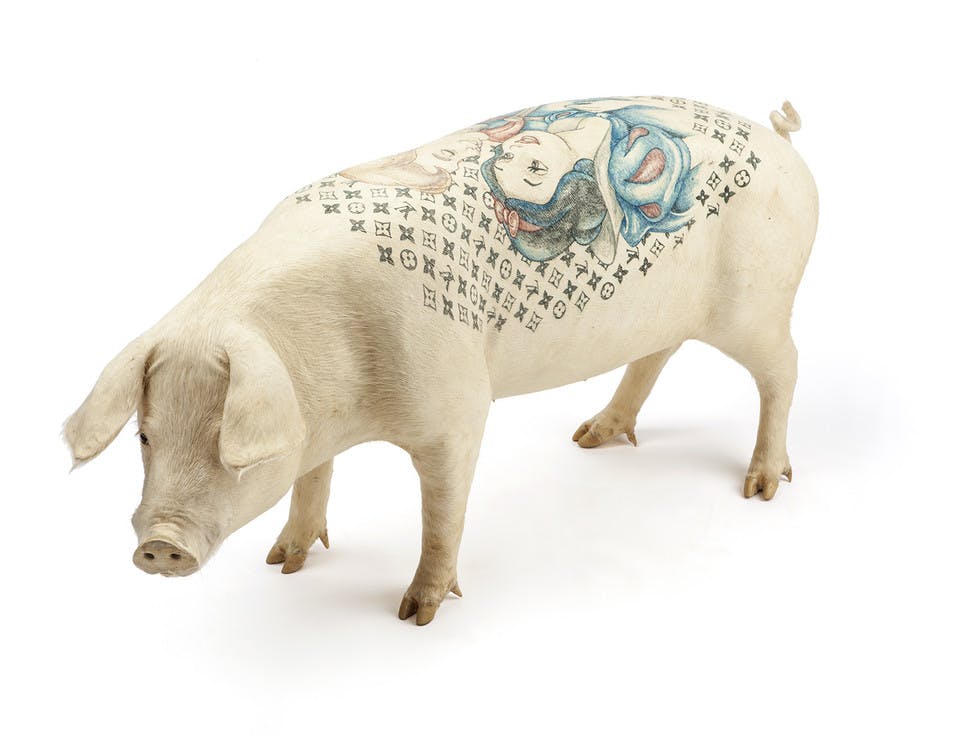 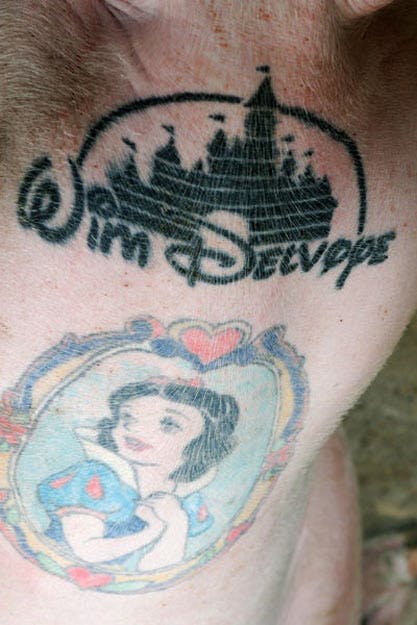 Delvoye has always insisted that the pigs were extremely well cared for on the farm, known as the Art Farm. Pictures from the website show the pigs frolicking in lush forests and endless amounts of hay—and also occasionally being anesthetized and spread out on operating tables where they are tattooed. 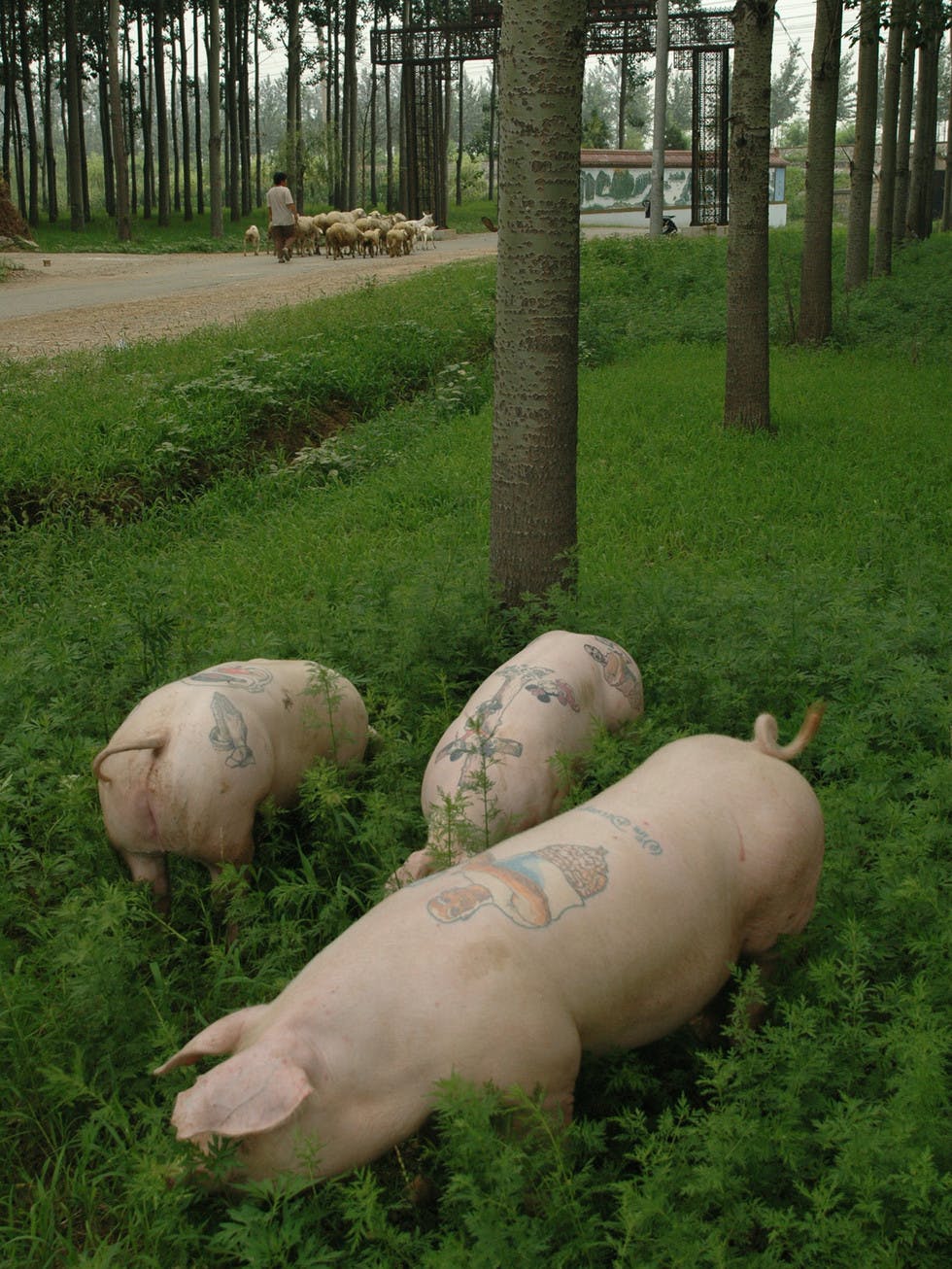 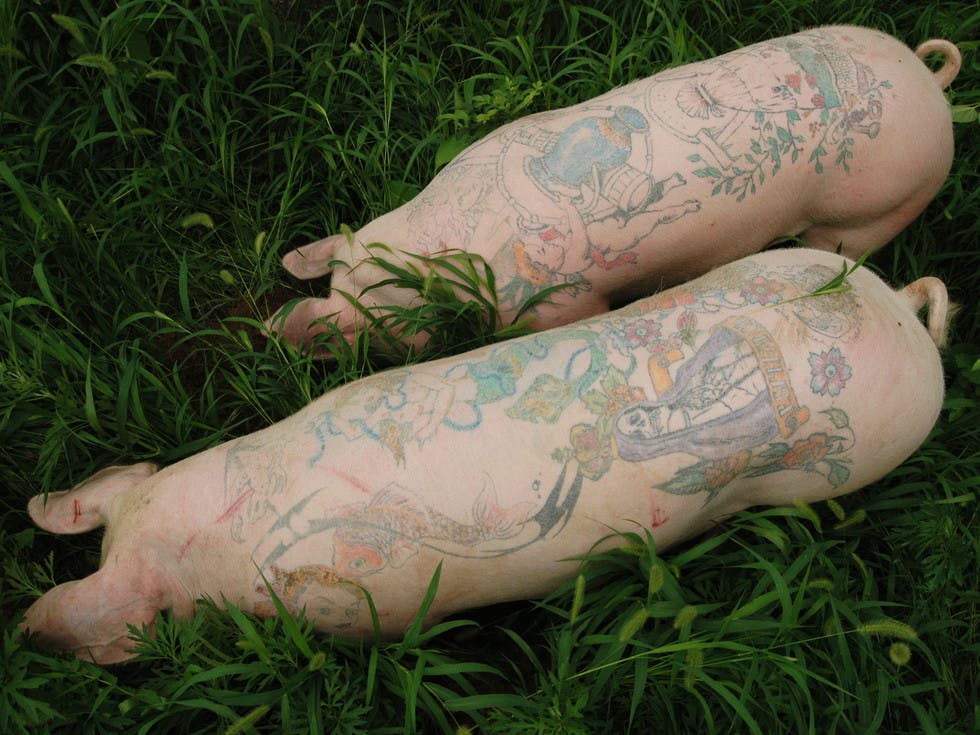 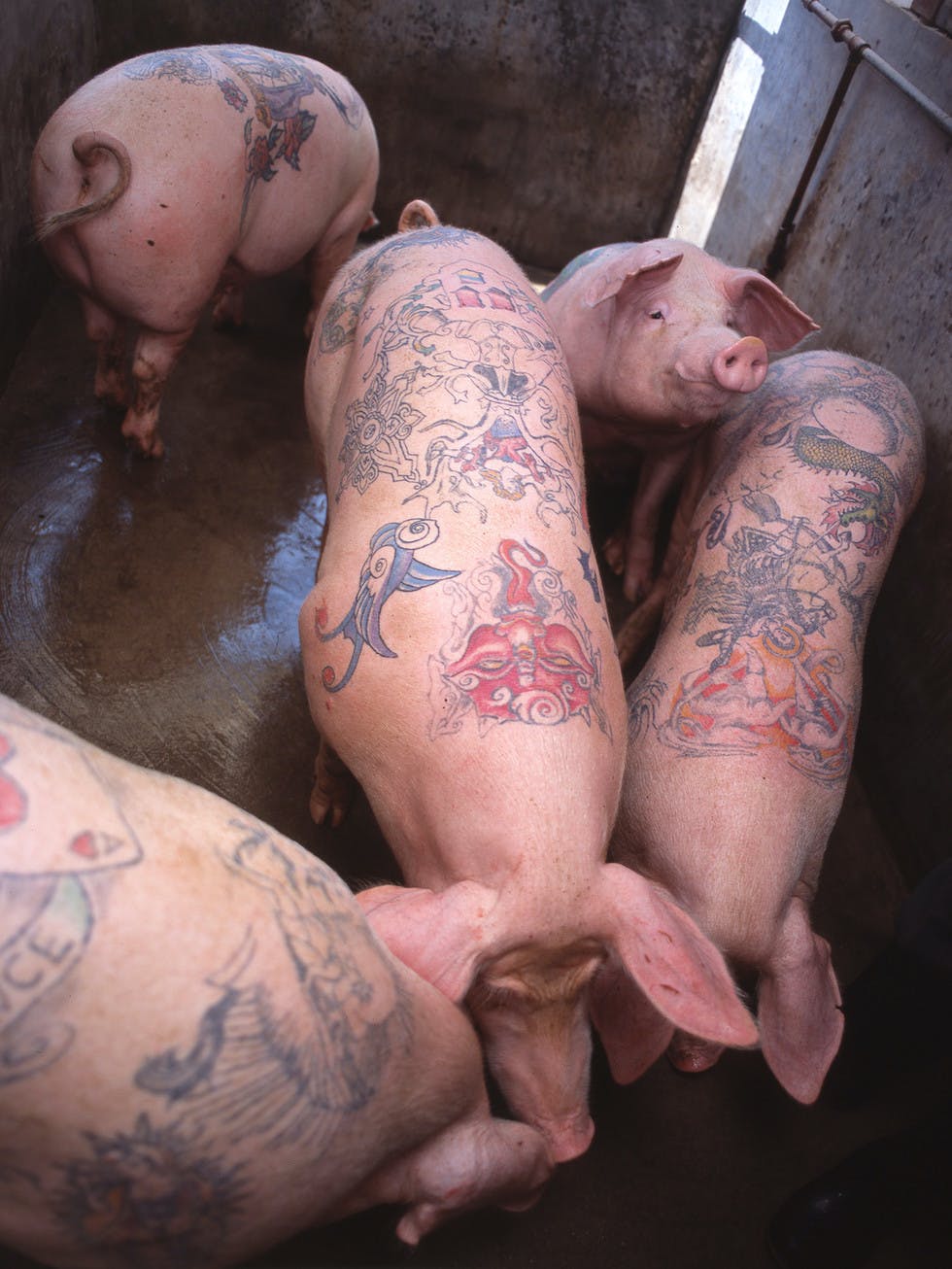 Delvoye insisted the pigs were treated humanely and that the tattoo process itself was almost luxurious, complete with skin lotion and a massage for each pig.

Some of the pigs were sold to other owners. Some eventually ended up as decorative skins. And still others wound up as stuffed exhibits: 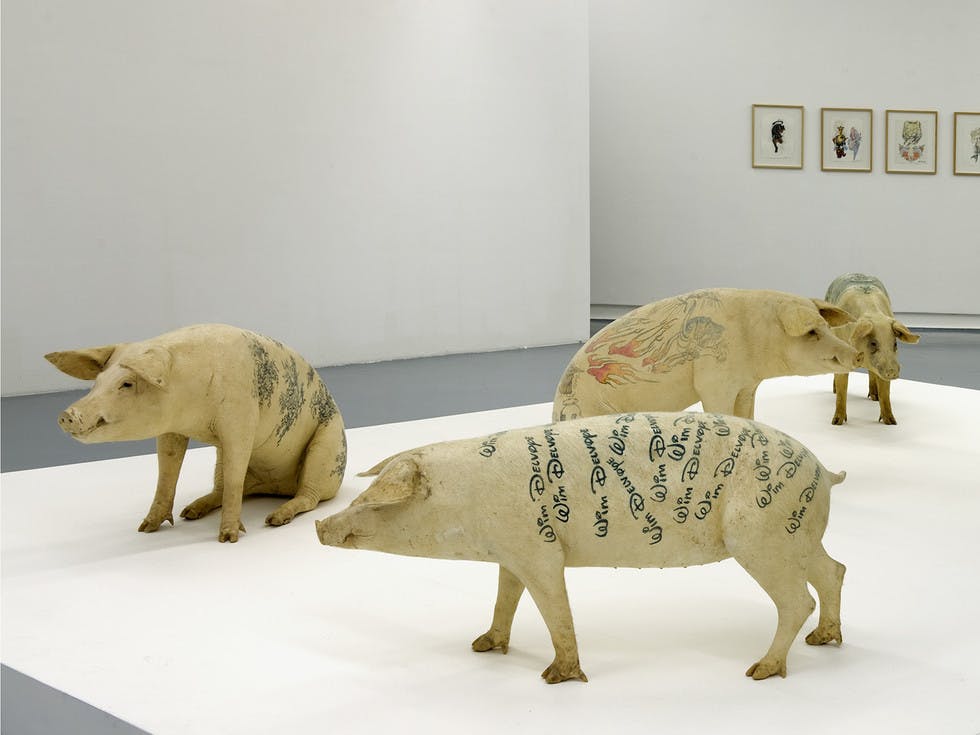 Gianni Degryse, a spokesman of Delvoye, told the Daily Dot by email that Delvoye’s Art Farm project is no longer running and hasn’t been for years. While he’s continued to exhibit stuffed pigs like the ones shown above in the years since, his studio claims the practice ended in 2010, although Shanghaist provided photos of the pigs being tattooed as late as February 2011.

However, last week a number of media outlets including the Daily Mail and Metro reported on the tattooed pig phenomenon as though it were still active, perhaps due to the recent showings of Delvoye’s stuffed pigs in European exhibits. The sudden media coverage led to an explosion in attention from animal lovers, who claimed the practice promotes animal cruelty and exploits the lives of the pigs over frivolous art.

New Blog Post » Tattooed Pig Farm by Wim Delvoye http://t.co/xHZtdC5dNV Is there such a thing as taking art too far? pic.twitter.com/LtfjqsnqsB

Delvoye insists that the act of tattooing the pigs and showing them in museums afterwards wasn’t exploitative. In a now-deleted museum flier for the Hamburg exhibit, he stated: “We have the same sort of skin, eat the same foods and have the same organs. Tattooed pigs look like tattooed people.”

But that resemblance may also be the source of the outrage over the pigs. After all, it’s one thing to see a happy pig sporting a tattoo from The Little Mermaid while it’s alive. It’s another to see that same tattoo as a pigskin purse. And it’s not the first time protest has sprung up around Delvoye’s pigs years after the fact. Last year another online petition against the Art Farm garnered several hundred signatures, despite being presented without context.

Given that Delvoye actually ceased the practice and has moved on to other things, like threatening housing inspectors, it’s unclear why the scandal is being dredged up now.

Still, in a way it seems a bit fitting. After all, Delvoye’s pigs weren’t able to consent before being turned into conversation pieces about the provocative nature of art. It’s only fair that Delvoye, in turn, seems to have lost control over the conversation altogether.