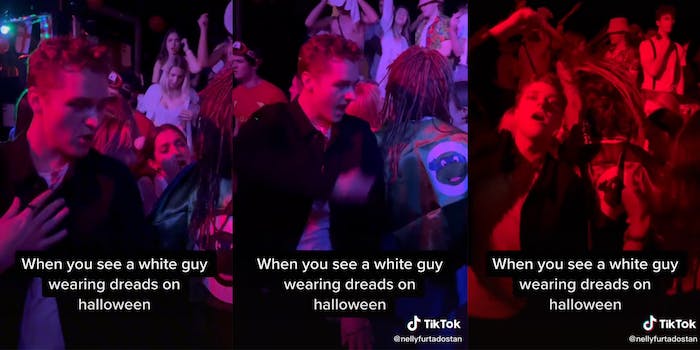 'Thank you for your service.'

A viral video shows a TikToker tweaking a man’s Halloween costume while at what appears to be a club.

@nellyfurtadostan posted the video of himself dancing at the Halloween event. Nearby is another white party-goer who is wearing a dreadlock wig as part of his costume. He is also wearing a Teenage Mutant Ninja Turtles jacket.

The text overlay said: “When you see a white guy wearing dreads on Halloween.”

@nellyfurtadostan, dances by and snatches the wig off the man.

He appears to have completed the dreadlock wig-snatch without contestation from the man.

The comments section is full of people praising and thanking @nellyfurtadostan.

“The real ally,” one commented. Others said he was “doing the lord’s work.”

“Thank you for your service,” another said.

“Y’all realize the dreads were a part of the guy’s ‘costume’?? That adds to the problem,” another said.

The TikToker also revealed what he did with the wig, saying in response to one comment: “I believe I threw it on the ground.”

The Daily Dot reached out to @nellyfurtadostan for comment.