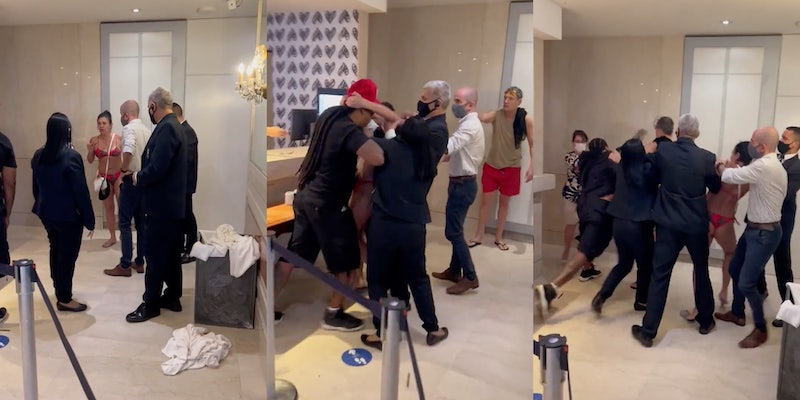 ‘Get her under control’: ‘Karen’ attacks Black man at Hilton hotel after he was allegedly served first

The man refused to allow the woman and her partner to cut him in line.

Viral footage shows a white woman physically attacking a Black man at a Hilton hotel in Rio de Janeiro on New Year’s Day. The altercation allegedly happened after hotel staff served the man, who had priority as a Diamond member, before the woman and her partner.

The video was shared to Twitter by user @monty_sexton, who goes by King on the platform. The video received more than 800,000 views as of Wednesday.

As of Monday, King said he had not received a response from Hilton after writing to them to report the incident.

Twitter user @slyfoxnyc, who goes by HL on the platform, replied to King’s tweet, claiming to be the man who was attacked in the video.

“Can you please send the video to me so I can send to Hilton headquarters, because of this security failure the couple had the police waiting outside looking for me for hours I couldn’t stay at the hotel that night because they lied saying I attacked them. Thanks for recording,” HL tweeted at King on Jan. 2.

The footage shows HL standing by a reception desk separated from the white couple by four people who appear to be hotel security guards.

“Y’all haven’t de-escalated the situation because she’s still right there talking,” King can be heard saying, referring to the white woman. “Y’all are supposed to separate the party.”

After some unintelligible shouting and arguing, the white woman broke apart from the staff and attacked HL, wrapping her hands around his head and pulling him away from the reception desk. He can be seen trying to break free from her hold, then he punched the white man. The white man fell to the ground and seemed to be knocked out.

The security guards then attempted to restrain the white woman. Meanwhile, King can be heard repeatedly calling out that “everything is on camera.” In the video, HL described the couple as “drunk” and “rude.”

The security guards’ efforts to subdue the white woman didn’t seem to work, and she came back into the video frame, pulling herself out of the guards’ grips. She approached her partner, who was still laying on the floor. Then she yanked off her purse and stomped back over to HL, who was still standing by the reception desk.

The white woman tried to attack HL again, but security guards pulled her away. Another staffer led HL away. HL shook his head without saying anything as he walked away, but King questioned why the white woman was able to continue rampaging.

The white woman broke away from the guards again and tried moving toward HL again.

The guards seemed to be trying to pull the woman down a hallway as the video ended. After the incident, HL stated he wasn’t allowed to stay at the hotel that night.

“What do you mean YOU couldn’t stay at the hotel? What in ALL da fuqs??? @Hilton @HiltonHotels this you?” Twitter user @honeychile13 responded to HL.

HL tweeted back at the user, saying, “Yes they came back with cops saying I attacked them waiting for hours outside the hotel with the police and @hilton wanted me to not encounter the police so I went and stayed at the Airbnb I also had rented, I was only staying at Hilton because I rented the venue for my NYE party.”

A spokesperson from the hotel told the Daily Dot that he would have been allowed to stay the night if he had chosen to do so.

HL also tweeted that prior to the video, the couple had tried to cut him in line and called him the N-word. HL is a Diamond member with priority service, and he refused to allow the couple to jump in front of him.

Twitter users were shocked and disgusted at not only the white couple’s behavior but also how Hilton allegedly handled the situation. Several Twitter users tagged the Hilton Hotels Twitter account, urging the company to fix the situation.

The Daily Dot reached out to HL via Instagram DM.