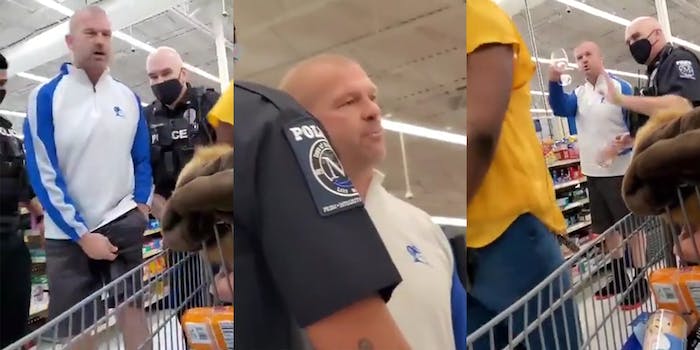 ‘It’s ’cause I’m white’: Anti-masker calls Black Walmart manager racist after she tells him to leave

The cops escorted him out of the store.

A new viral video shows a white man accusing a Black Walmart manager of being racist after she orders him to leave the store for refusing to wear a mask.

The altercation takes place in a Walmart in Mooresville, North Carolina. The footage begins with the white anti-masker engaged in an argument with two masked police officers.

“Because I’m white, she asked me to leave the property,” the anti-masker says of the store’s manager. “What else is it?”

The cops are having none of the anti-masker’s protests, as one points at him and yells, “Knock it off!” He also tells the unmasked man to “leave now or you’re going to jail.”

As the manager approaches the scene, the anti-masker shouts at her, “You’re racist!”

Fed up with the anti-masker’s antics, the cops ask the manager to once again tell the man to leave in their presence. As soon as she does, they escort him out of the store.

“I’ll come back in. Because I’m white, you’re doing that,” the anti-masker says as he makes his way to the door.

“No, you will not come back in without a mask,” the manager says.

In an emailed statement, Walmart told the Daily Dot, “Our mask policy is intended to keep our customers and associates safe as we continue to serve communities across the country. We are pleased that the vast majority of the 150 million customers who visit us each week are wearing masks since we started requiring them this summer. We’re proud our associates displayed patience and professionalism as they navigated this challenging situation.”

If the clip had ended right there, it would have been a satisfying if unsurprising video of a belligerent anti-masker getting put in his place. But the brilliant twist in the last few seconds elevates the video above its anti-mask brethren, as Hill’s young son Micah says, “Don’t worry, I was filming him the entire time.”

Many commenters noted the white privilege in action as the anti-masker openly defied the cops and faced no serious consequences.

“It shows white privilege by this douche canoe chastising the officer for not wearing his mask right,” one Redditor wrote. “If it would have been a black guy what do you think would happen.”

Others praised Micah’s enthusiasm and steady camera hand, calling him a “future journalist” and admiring his “perfect unsuspecting angle.”

“The kid was more adult than that Giant diaper filler,” one user commented.