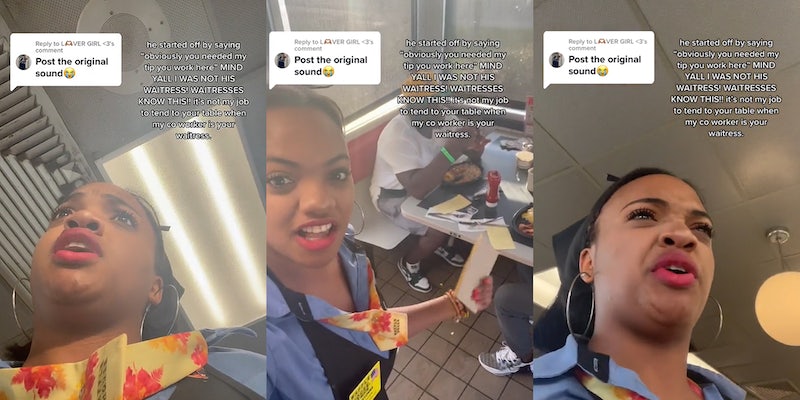 ‘That time I embarrassed a customer at 7AM on the clock’: Waffle House worker puts disrespectful customer in his place after she denies him attention

'Another reason to love Waffle House. Them waitresses ain’t finna play with you.'

A Waffle House waitress is speaking up for herself after dismissing a customer she says repeatedly disrespected her.

Over the course of multiple TikTok videos, user @skunniemilf recounts a back-and-forth she got into with a customer requesting her attention while she was at work. @skunniemilf says she originally didn’t pay the customer any mind because she did not want to infringe on her co-workers tips, however, he kept calling her over.

When @skunniemilf eventually went up to his table, she says he joked that he would’ve given her a $20 tip if she had just given him silverware. However, @skunniemilf says he already had silverware and was eating his food when she walked in the door and clocked in for work.

In one of her videos, which gained more than 130,000 views, @skunniemilf and the customer exchange insults. He criticizes her looks and she pushes back by taking a jab at his relationship status.

“You’re eating at Waffle House. Why she ain’t at home cooking for you right now?” she asks, referring to the man’s girlfriend.

He then tells her he’s in a long-distance relationship. “Your grown-ass still doing long-distance?” she questions.

He calls her “bummy,” so she turns the camera on him and roasts his shoes.

“You don’t even know me to be talking out your mouth the way you’re talking to me,”  @skunniemilf says. “Like I said, average Black man who [is] so disrespectful to Black women, you’re that man.”

She then asks the man to “look at our teeth.” “We don’t even compare,” she adds before smiling into the camera.

While that video is the most viral regarding the interaction, other video’s on her account offer additional context. “That time I embarrassed a customer at 7AM on the clock because he was mad I denied him and started calling him dusty,” she wrote in an earlier video.

In a “storytime” video @skunniemilf says the man repeatedly yelled swear words at her, called her “dusty,” and said she must not have money because she works at Waffle House. She pushed back on the accusations saying she makes nearly $1,000 a week as a waitress and is pursuing a degree in culinary arts.

“I got money baby. My thing is, I’m not the type of person that has to flex to show people that I have money. My actions prove that,”  @skunniemilf says.

Most of the comments sided with @skunniemilf.

“Waffle House the only place where the customers aren’t always right,” a commenter said.

“Another reason to love Waffle House. Them waitresses ain’t finna play with you, PERIOD,” another said.

“My experience working at waffle house is not for the weak especially being paid 2.38$ an hour as a waitress in america…i deal with behavior like such weekly from african american men..with me being a black woman jt is truly sad and disheartening,” she said.