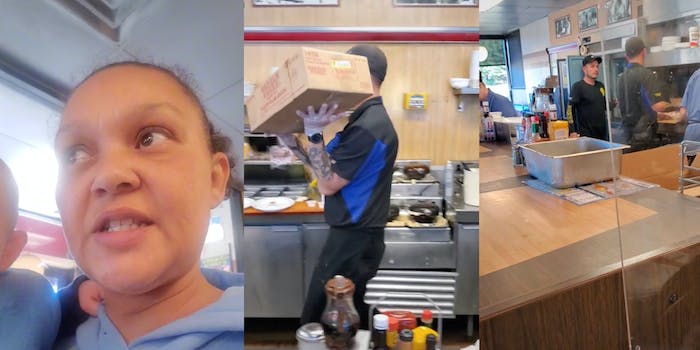 A Black mother in Gainesville, Georgia said various Waffle House employees made comments about needing a noose in front of her family.

The video, posted by TikTok user @mrlegendmoss, shows her standing near her family’s table as she documents the incident. She said a waitress who works there “asked for a noose” in front of her and her daughter. When @mrlegendmoss asked to speak to the manager, he reportedly said he “has two nooses in his car.”

“So I’m pretty daggone sure this is probably the [most] racist place I’ve ever been,” she said.

The TikToker then asks for the check and a number for their corporate office. In the comments, she said no one got back to her after she filed an online complaint. The video has received 1.9 million views since Friday.

After various TikTokers complained online, though, Waffle House issued a statement on Twitter saying they were taking the allegations “very seriously.”

“We have reached out privately to the customer in an effort to gain more information about this incident,” the statement reads. “We intend to conduct a thorough investigation into all of her allegations, after which we will take appropriate disciplinary action.”

And in the comments of @mrlegendmoss’s original video, it appears that several other TikTokers were ready to defend her against the racist employees.

“LET’S ALL WRITE A REVIEW,” said one person.

“Those were racially motivated death threats,” wrote a second commenter. “File charges. If local pd isn’t responsive, get a lawyer.”

“TikTok bout to get them!” said a third person. “Unacceptable Waffle House!”

The Daily Dot has reached out to @mrlegendmoss via TikTok comment.