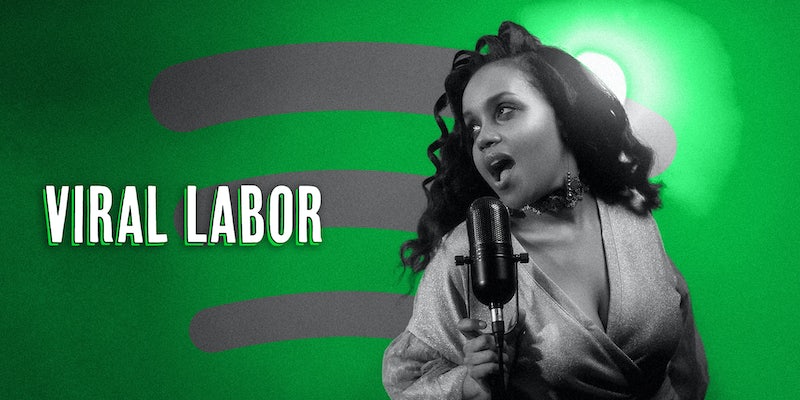 Chief Cleopatra nervously performed her first live show in 2019 at the Carousel Lounge in Austin, Texas. She describes the room as being full of energy—even though there were only 10 people in the audience.

“It started to just be a breeze probably around the second song,” Cleo said.

As the show came to an end, more people were in the audience, and Cleo received compliments on her performance. Carousel Lounge even wanted the soul-rock artist to do a residency.

But plans changed because COVID-19 would soon interrupt everything. Cleo’s live performances ceased, and she had to find other ways to share her music.

This is when Cleo, like many artists whose live shows were on hold for months, started to rely on streaming services, including Spotify, Bandcamp, and Apple Music, for exposure and revenue.

“When everything went virtual, that’s when things really just started happening for me,” Cleo told the Daily Dot in a phone interview.

Cleo’s followers and fans on streaming services increased. She was invited to participate in South by Southwest, a large-scale conference and festival that includes music showcases and features of up-and-coming artists. SXSW, usually held in Austin, was canceled in 2020 and fully virtual in 2021. Representatives of the festival did not immediately respond to the Daily Dot’s request for comment.

Being featured this year made all the difference for Chief Cleopatra.

SXSW promoted her music, and eventually some of Cleo’s songs, such as “Friends,” were added to Spotify’s in-house playlists.

While Cleo’s music is streaming on Spotify, Apple Music, Tidal, Bandcamp, and even Amazon Music, she relies heavily on Spotify. She said she likes Spotify because it lets her see how many people are actually streaming her songs. She has over 2,400 monthly listeners on Spotify. Cleo says about 20 of her shows were canceled, which amounts to about $6,000 lost.

Cleo describes herself as “blessed” that she has found an online audience during the pandemic.

The same cannot be said for every local Austin artist. For years, artists have criticized Spotify and Apple Music for what they say are unfair rates.

Spotify, which increased revenue by over 20% from 2020 to 2021, pays close to one-half a penny per stream. Apple’s payment comes from monthly user subscriptions, according to the Wall Street Journal.

Apple Music and Spotify are both popular platforms for fans, boasting over 400 million combined users worldwide, but their payment models make them less than ideal for many artists. Amid a pandemic that decimated the live performance industry, and more than quadrupled unemployment rates in Austin alone, those streaming pennies are receiving more pushback than ever.

Local Austin artists Brice Bowden and Angelo Dulang are a part four-person indie-pop band called The Bids. The Bids have been together for about four years, with both Bowden and Dulang playing bass guitar and singing vocals for the group.

The Bids also have had to rely heavily on streaming services throughout the pandemic. For the two members, Apple Music and Spotify have their pros and cons.

Both Bowden and Dulang agree that Spotify and Apple Music are easily accessible and help funnel new listeners. The two also believe, however, that there are ways to improve the platforms to better help artists.

“I think it would be cool if there were like—you know, there’s these official playlists on Spotify—if they paid you to put your song on there,” Bowden told the Daily Dot in a phone interview.

Dulang said putting your songs on Spotify or Apple Music is like playing a game of chance. When reached for comment, Spotify pointed the Daily Dot to user statistics.

The musicians said smaller online music companies like SoundCloud and Bandcamp, which prides itself on helping artists get paid fairly, played a major role in helping them survive throughout the pandemic. Bandcamp, which has an “artists-first” model, pays artists an average of 82% of profits from music and merch purchases.

“You know, Bandcamp did a really great thing by allowing musicians to take full profits on certain days during that time,” Dulang told the Daily Dot. Bandcamp did not respond to requests for comment.

Music streaming services were not the only avenues Bowden and Dulang used to help their band stay afloat.

The pandemic was an opportunity for them to also try live streaming services. The Bids live streamed their performances, using Facebook Live and Twitch, which also came with mixed results. One benefit, for example, was gaining fans from other regions around the country and world.

“That was the first time my cousin in the Philippines got to watch a live show of us and to download the album,” Dulang said.

But watching your favorite artist perform on Facebook Live is nothing like the live experience in person.

“It’s weird because you’re just staring at like you know, blinking red dot. You don’t hear people applaud and you miss the connection. I think most of all because, you know, you don’t know what’s going on the other side,” Dulang said.

While performing on live streams, The Bids relied on donations from fans to keep them afloat. But Bowden worried that viewers were not going to commit to watching the full live-streamed show.

“The thing about today’s world, with the technology, we have instant gratification. The viewer isn’t really willing to sit through 30 minutes of a live stream,” Bowden said. “You’re at a show and you’re gonna be there more than 30 minutes.”

As more people became vaccinated this spring, and audiences became more comfortable heading to venues, artists and bands like The Bids and Chief Cleopatra were able to start performing live again.

But because the Delta variant of the coronavirus continues to move through Austin—where in August ICU beds were at capacity, and the city moved into the highest level of restrictions—artists have to still be cautious about where they are performing.

Cleo said she’s taking precautions while performing and hoping to avoid places that are “too close for comfort.” She said she hopes that at performances, people are being safe by being vaccinated and wearing a mask.

The members of The Bids are all fully vaccinated so they feel better about performing live, Bowden said. The majority of their shows have been outside, adding an extra layer of relief. Meanwhile, both The Bids and Cleo remain, at least on some level, beholden music streaming services.