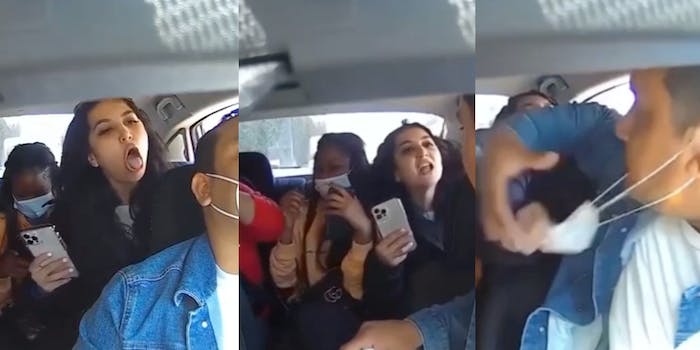 On the other hand, a GoFundMe for Subhakar Khadka has since raised $50,000.

The San Francisco Uber driver who recently went viral after getting attacked by passengers was reportedly only initially offered $20 by Uber when he requested financial assistance to fix his car.

In a viral video that emerged over the weekend, three maskless Uber passengers physically attacked and spat on Khadka after he told them to wear face masks. The women reportedly berated him for not notifying them earlier that they would have to wear masks (Uber currently requires all of its passengers to confirm they will wear masks via a check box).

As the situation escalated, the passengers pepper-sprayed Khadka’s car. The passenger who spat on the driver uploaded her version of events to her Instagram account, @keepinupwforeign, but an Uber spokesperson called her conduct “appalling” and said it terminated her Uber access.

“Our policy is clear: no mask, no respect, no ride,” the spokesperson told the Daily Dot.

Following the incident, Khadka asked Uber for assistance with cleaning his car. In a screenshot shared by Lim, Khadka wrote, “I would like to take it to professional detailer and bill uber.”

He went on to say that he tried to clean his car with carpet cleaner but that the red ink from the pepper spray stained the headliner.

“It smells like pepper spray even after cleaning thoroughly,” Khadka wrote. “My car needs a professional detailing because of odor. Can you help me on that???”

While the immediate response to that inquiry is not included in the screenshots, the following screenshot shows Khadka responding to another offer, saying it is not enough.

“There is no detailing shops in San Francisco that will clean that stain and pepper odor in $40,” Khadka wrote, adding that the average cost for such a service is $250.

Uber made $2.2 billion in the second quarter of 2020 and is headquartered in San Francisco. It’s unclear how knowledgeable the company is about the costs of such a repair.

“I am wearing mask and my eyes are teary!!” he wrote in another message. “The smell is unbearable.”

Khadka went on to say that because of the stain and odor, he won’t be able to work. “I lost my wages all these hours,” he added. “Please understand the situation i am at.”

While Lim said Khadka was ultimately “given $120 for his ordeal,” an Uber spokesperson is denying that claim and said that the company has “had multiple conversations with the driver to offer additional support.”

A former Uber investor who said they were “appalled by the fact that Uber hasn’t done the right thing” has since started a GoFundMe for Khadka. The fundraiser has garnered nearly $50,000 in donations, surpassing its initial goal of $20,000. The Daily Dot has reached out to the fundraiser’s organizer.

“We will have Subhakar take possession of any funds raised in this campaign to help him with his living expenses while he is unable to work due to this trauma. With his inability to work, he will need these funds as soon as possible,” part of the fundraiser reads.

People online are now expressing their outrage over Uber’s alleged offers to Khadka. “How are you supporting your drivers when they are blatantly assaulted like this?” one questioned.

“$120 to cover lost wages & cleaning isn’t good enough. You know that,” another said, claiming they used to drive for Uber but stopped “because of instances like this.”

Both the incident as well as Uber’s response have outraged people, especially given the massive toll the pandemic is taking on rideshare drivers. Given the nature of their job, rideshare drivers are required to be in close spaces with many different people throughout the day, rendering them vulnerable to catching COVID-19. Their lack of job security means that many were forced to work throughout the pandemic, a Reuters report suggests.