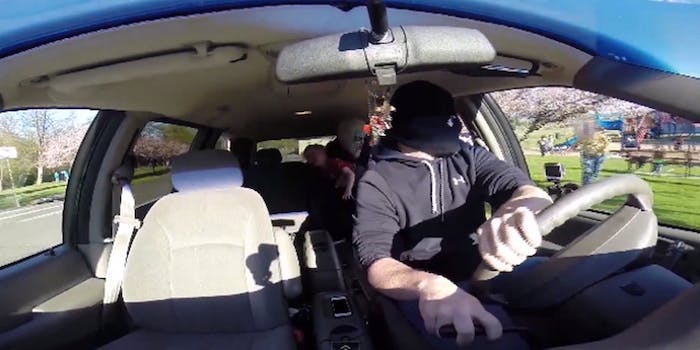 On Tuesday, twin brothers Jeremy and Jason Holden released a new video on their YouTube channel, Twinz TV. The brothers’ previous videos include stunts like this farting in public prank and fake robberies; they’re part of a larger ecosystem of often ill-advised YouTube pranks.

Their latest stunt? They abducted a child from a park in Sequim, Wash.

The video is prefaced with abduction statistics and suggestions for how to talk to your children about abduction, and the video is ostensibly made to show how easy it can be to kidnap a child from a public place. However, the brothers didn’t actually notify the parents or children at the park of their stunt. And people are not very happy about it.

Today spoke with Marc Klaas, whose 12-year-old daughter Polly was abducted and murdered. He said he found “no educational value” in the video. It doesn’t help that the brothers soundtracked the video with a metal riff out of a video game, and edited a genuinely terrified woman chasing after their van to make it seem like an outtake from Jackass.

After the outrage, they assured viewers that the child was in on the prank, adding this to the video description:

“We made this video to help prevent and to show how real an abduction can be. We are sorry to who ever was at the park and had to be apart of it, we needed real reactions and didn’t mean to harm anyone. We called the cops before hand to let them no [sic] what we were doing, unfortunately not all of them were notified. Don’t worry the little boy is in on it!”

On Facebook, the reaction was mixed: Some people thought the prank was poorly orchestrated, while others pointed out the need to be aware of their surroundings at all times. A lot of commenters also remarked that they would have shot the guy in a park full of children, which adds an unsettling layer to this discussion:

“I may not agree with what they did but it sure made me stop and think. It wasn’t done as a joke, it was done to make us open our eyes. As pissed off as people are….mission accomplished.”

“If I had a gun I would have shot him! What a stupid idiot!”

“You have to be kidding me if you think there was anything educational about staging this kidnapping. I could have been holding my child’s hand and they could have taken my child in the nature they did, so to say it was awareness to keep your eye on your child at the park is their scramble and spin to an incredibly distasteful and dangerous prank. My children would have been traumatized to even witness the event.”

One parent in the Today report claimed her child had indeed been traumatized by the prank:

“My daughter is still scared. She keeps asking, ‘What if they take me?’”

Sequim Police Chief Bill Dickinson says he doesn’t believe the brothers commited a crime, and adds “there’s no law against stupid,” which is most likely also a bumper sticker.