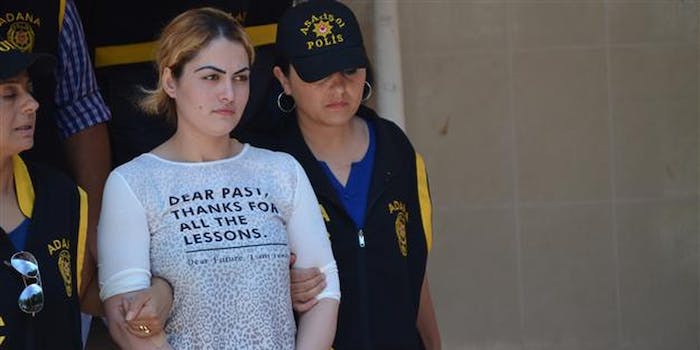 Cilem Dogan hailed as feminist heroine after saying she has 'no regrets.'

“Dear past: thanks for all the lessons,” read the T-shirt worn by Çilem Do?an, a 28-year-old Turkish woman who turned herself in for killing her ex-husband. “Dear future: I am ready.”

On Wednesday, as Turkey’s Hurriyet Daily News reports, Dogan’s ex-husband Hasan Karabulut allegedly showed up at the house she shared with her daughter in Adana, Turkey. She says he told her to pack a bag, that he was moving her to the city of Antalya where she would be forced to work as a prostitute. Dogan says her estranged husband began to beat her as he had other times in the past, and that’s when she reached for the gun hidden under her pillow and shot him six times in the chest.

“Will women always die? Let some men die too,” Dogan told police. “I killed him for my honor.”

It’s a twist on the concept of honor killing, which usually takes the lives of women in the Middle East region. In Turkey, violence against women has risen to newly epidemic levels. According to a statement by Turkish justice minister Sadullah Ergin in 2011, the number of women murdered in the country rose by a shocking 1,400 percent over the course of just five years.

In 2002, the number of female murder victims was 66. By 2007, there were more than a thousand women being killed each year.

An Al Jazeera report from February 2014 showed that most female victims of homicide were killed by their partners, and domestic violence had skyrocketed: official figures stated 28,000 women had been assaulted by their husbands or boyfriends in 2013.

Dogan smiled as she chatted with the female police officers that led her through a crowd of reporters on Thursday, and even gave two thumbs up toward one photographer. She told police, according to Hurriyet Daily News, that she had filed police reports after being beaten by her husband in the past and had “no regrets” about killing her ex.

Turkish feminists took to social media on Thursday and Friday in support of Dogan, hailing her as a hero in the fight against domestic violence and femicide.

One Twitter user even posted a collage of women who had all been arrested after allegedly defending themselves from violent attacks, including Nevin Yildirim, who decapitated her rapist in 2012 and dumped his head in the town square for all to see.

The caption on the tweet translates roughly to “Women of Turkish SCUM: the society for cutting up men,” a hat tip to Andy Warhol’s angry feminist would-be assassin Valerie Solanas.

The telling phrase scrawled across Dogan’s T-shirt became a rallying cry in itself, with Turkish supporters posting it in Turkish and English on social media.