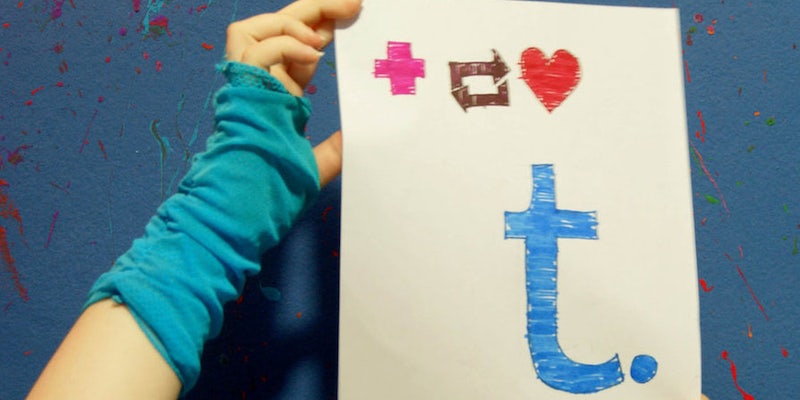 A petition called Tumblr.com: Stop the ban on all adult blogs as well as some NSFW blogs has nearly 16,000 signatures.

The weekend before Yahoo officially announced it was buying Tumblr, 170,000 anxious Tumblr users took to Change.org to beg Tumblr CEO David Karp to change his mind. As we all know, that petition failed spectacularly, but it showed how unanimously and vocally Tumblr stood against the buyout.

This week, Tumblr users learned of sweeping changes made to the website’s content policy, including the removal of tags like “gay,” “depression,” and “suicide” from Tumblr’s mobile app, and the automatic removal of blogs flagged as “Adult” from Tumblr’s general and public searches.

Users are distraught. And once again, they’re taking their anger to Change.org.

A petition called Tumblr.com: Stop the ban on all adult blogs as well as some NSFW blogs has nearly 16,000 signatures since it was created yesterday morning. It’s part of the long and storied tradition of Tumblr users petitioning the website to hear their pleas.

The petition has so far been flooded with long, detailed, anguished comments by users outraged over the change.

“The fact that Tumblr is trying to hide all blogs with adult content and practically shun some blogs that actually do post quality art even through [sic] they do post NSFW sometimes is bad,” writes petition creator Auroara Leduc. “Tumblr should give some people a chance, considering that some post/draw NSFW to make a living and can’t do so if they’re being blocked from all tags.”

In addition to protesting the new changes, multiple users claimed that they no longer had the ability to change whether their blogs were categorized as NSFW. “For most of the time, it was possible to remove the tick and change the blog back to normal,” Change.org user Alois Phantomhive griped.

[N]ow it is not possible for me to change the settings any longer! I have to keep my posts hidden to everyone but my followers although most are not even NSFW! I don’t think that is fair at all, I want it removed right now so I can blog normally again!

“This is ridiculous; you’re ostracizing people,” echoed one anonymous commenter. “You’re cutting everyone off from discovering new content. If people want NSFW content, they should be able to look for it.”

Meanwhile, the issue of self-harm blogs on Tumblr has been ongoing. Over the past year, Change.org has seen several petitions filed by Tumblr users urging the site to more strictly police its pro-anorexia, pro-cutting, and other forms of eating disorders and self-harm. Last year, one petition asking Tumblr to ban “thinspo” blogs—a common shorthand for pro-anorexia blogs that stray into the cheeky term “thinspiration”—appeared on Change.org shortly before Tumblr instigated a zero-tolerance policy for all pro-self-harm blogs.

But many Tumblr users reacted to this policy with alarm, and a line of thinking that’s currently being echoed by many Tumblr users in the wake of Tumblr’s removal of many self-harm tags. A petition to ask Tumblr to stop the deletion of self-harm/eating disorder blogs pointed out that many of the posts made under that tag were expressions of an emotional state rather than a “pro” message of harm.

We, as the users of Tumblr, often post or reblog content such as this, but NOT for the purposes of encouraging others, or ourselves, to engage in damaging behaviour, or for the purpose of triggering our own or others’ mental disorders. We simply post this content because it is an accurate representation of our own thoughts and feelings that we would not otherwise be able to express: to us it is a form of therapy.

We feel that taking this form of self-expression away from us would serve no other purpose than to damage us. This content is not posted with malicious intent: indeed, many of us have “trigger warnings” or disclaimers on our blogs stating this. We feel we cannot be held responsible for how viewers of our blogs interpret the content we post: they visit our blog in order to follow it, so can see the disclaimers, and after all they are not under duress to follow our blogs or view what we post.

After nearly 1,900 Tumblr users signed the petition, Tumblr clarified its policy to emphasize that it would only be deleting blogs that actively promote and encourage self-harm. But now, less than a year later, Tumblr seems to be taking a scorched-earth approach on its mobile app, wiping out any post, regardless of context, tagged with a keyword that could be related to unwanted content—including #cutting and #depression. (Interestingly, the actual tag “self-harm” is not banned.)

On Tumblr, an open letter to the site written by Tumblr user akira-minato has over 14,000 notes since yesterday. Another open letter by theprosefool urges Tumblr to stay true to the open and accepting attitude that drew people here to begin with—and reminds them that Tumblr is “a place for acceptance, a place that is (usually) judgement-free.”

If the purpose of Tumblr is to create your own space, why would you limit that space by limiting our access to explicit content?

While the new Tumblr policy explicitly prevents “adult” content from being visible to anyone except those who already follow the blog, there’s still hope for users hoping that the Change.org petition might persuade Tumblr to change its mind. As Tumblr has yet to clarify the distinctions made between “NSFW” blogs with “﻿occasional﻿ nudity or mature/adult-oriented content” and “Adult” blogs with “substantial ﻿nudity or mature/adult-oriented content.” There’s a good chance that the coming weeks could see Tumblr revise and clarify its policy to alleviate some of users’ anxiety.

Still, as the history of Change.org’s petitions show, Tumblr doesn’t always give users what they want. Yet in the end, if the company won’t listen to users, they at least have the vain comfort of knowing that thousands of other Tumblr users share in their discontent.