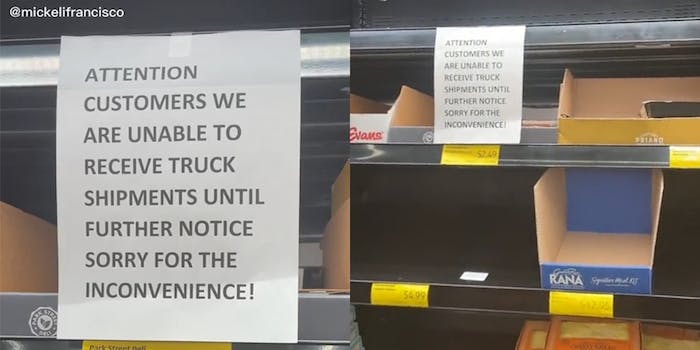 A TikToker’s video has gone viral for showing what an anti-vax truckers’ strike would look like on the ground: empty grocery store aisles.

TikToker Mickeli Francisco uploaded a video in early August showing empty aisles on a grocery store with a note claiming the store was not able to receive any truck shipments.

“We are unable to receive truck shipments until further notice,” read a part of the note, stuck on an aisle empty of food. “Sorry for the inconvenience!”

The video has since garnered more than 655,000 views. Comments under the TikTok attributed the empty store to an impending trucker protest against vaccines, and many stood in solidarity with the drivers.

Truckers across the U.S. were reportedly planning a strike against vaccine mandates on Tuesday. This follows a similar protest held by Australian truck drivers on Aug. 29. One of the most vocal U.S. protesters, “The Disrespected Trucker”, previously posted TikToks calling for trucker protests against the vaccine, according to The Trucker.

The Disrespected Trucker previously tweeted for fellow truckers to “turn off those keys on Aug. 31. Several of his other tweets use the hashtag #MedicalFreedom, which has been used by anti-vaxxers around the country to rally against potential vaccine mandates as well as the COVID-19 vaccine in general. His TikTok was shut down on Monday, the user said.

“Censorship is real, folks,” he says in a video posted to Twitter. “I just got banned off of TikTok for absolutely nothing.” A TikTok representative confirmed with the Daily Dot on Wednesday that his account was shut down over violations of TikTok’s Community Guidelines around misinformation.

Regardless, he has received tons of support for the protest, on TikTok and Twitter. Many anti-vaxxers, in addition to spreading common misconceptions about COVID-19 vaccines, claimed that such a strike is what’s needed to uphold individual freedom in the country.

Despite the social media support, it’s not immediately clear how many truckers participated in the supposed protest. The trucking industry has faced no such vaccine mandate as of August 25, but according to the Commercial Carrier Journal, most drivers have said they would defy vaccine or testing mandates.

The Disrespected Trucker did not respond to the Daily Dot’s request for an interview.