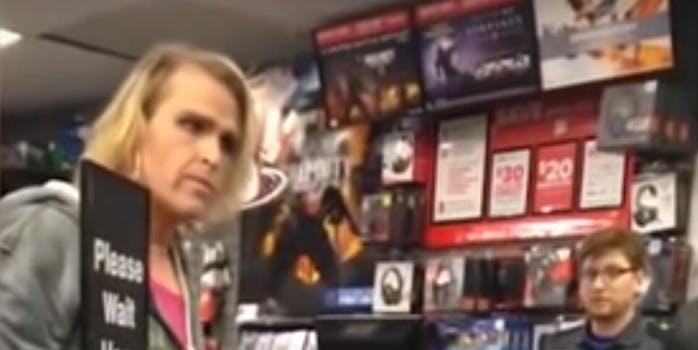 The reaction online is largely transphobic.

A transgender woman was filmed confronting a GameStop employee for misgendering her on Thursday. The reaction to the confrontation online has been ripe with transphobia as the story became a right-wing flashpoint about liberals being “triggered” amid a wave of finger-pointing headlines like “Transgender woman freaks out.”

A Facebook user named Tom Smith posted the video, according to conservative news outlet the Daily Wire, which shows the woman upset at a GameStop employee in an Albuquerque, New Mexico, store. The video starts mid-incident, but the woman can be heard saying “No, we’re not doing credit. You’re going to give me my fucking money back.”

Another woman can be heard off-screen saying, “Excuse me, sir, there’s a young man in here. You need to watch your mouth.”

The transgender woman quickly responded by saying, “Excuse me, it’s ma’am. It is ma’am,” before telling the other customer to “mind her business.”

The video then focuses back on the confrontation between the woman and the GameStop employee. The employee insinuates that he was trying to say “both you guys” in an effort to move the store’s customers along.

“Sir…” the employee says before audibly catching himself.

“Motherfucking take it outside. If you want to call me sir again, I will show you a fucking sir,” the transgender woman responds.

The woman can be seen beginning to leave the store, kicking over a display of products, before demanding a corporate phone number to report the employee. The two go back and forth for a moment.

The conversation appears to break down further, with the woman becoming visibly and audibly more frustrated when she isn’t given the corporate phone number quickly. The woman again makes for the store’s exit, saying that the employee is “disrespecting trans people in your store, which I plan on telling the entire LGBT community. You’re going to lose money over this.”

Outlets like the Daily Mail and LouderWithCrowder have posted the story as spectacle, using transphobic terms and descriptors like “aggressive” to describe the woman. In turn, reactions to their stories have largely been a hodgepodge of transphobia.

Trans people and allies on Twitter, however, have expressed sympathy for the woman in the video, noting that trans people are so often misgendered and berated, they could understand how she grew frustrated and broke down.

The trans woman in that video proably gets treated like shit in every part of her life. Back when I was dealing with intesnse transmisogyny from family, a roommate, and my workplace at the same time, I was ready to go off on anybody who was even a little disrespectful.

the video of that trans woman in gamestop is so heartbreaking :( nobody deserves to be treated like that

Trans community: hey can you pls stop killing us? Maybe even think about giving us basic human rights

M: LOOK AT THIS VIDEO OF A TRANS WOMAN BREAKING DOWN IN A GAMESTOP!!

I think why the angry trans woman at GameStop video hit me so hard is I've come _so_ close to being her so often.

The Daily Dot has reached out to GameStop for comment multiple times by email, phone, and via Twitter, but has yet to hear a response. The Daily Dot also called all the GameStop stores in the area; GameStop employees stated they were not allowed to comment on the incident. They would not say where that directive came from, but one employee did tell the Daily Dot that the incident occurred at one of the stores on Coors Boulevard in Albuquerque.

The original link to the video, by a Tom Smith, has been taken down. The Daily Dot has been unable to locate either Tom Smith.

Update 1:55pm CT, Jan. 4: Tiffany Moore, the woman featured in the video, reached out to the Daily Dot to explain what wasn’t seen in the footage. She said the GameStop employee in the video had misgendered her “at least five times” before the recording began.

“I would not have reacted like that if I hadn’t been so blatantly disrespected,” Moore explained.

She also pointed out her concern about another customer’s threat to call the police, which was recorded in the video. “Trans people don’t have great interactions with the cops,” she said.

Since the video went viral, she has had concerns for her safety. “I’ve been holed up at my parents’ property since the 26th,” she said, referring to when the video started to take off. “I literally have no income coming in. It’s taking my ability to take care of myself away from me, it’s taking my livelihood away from me.”

Moore said she had been unable to retain an attorney but hopes that GameStop will learn from the incident.

“All I want is for GameStop is to include trans sensitivity training in their hiring process,” she said.