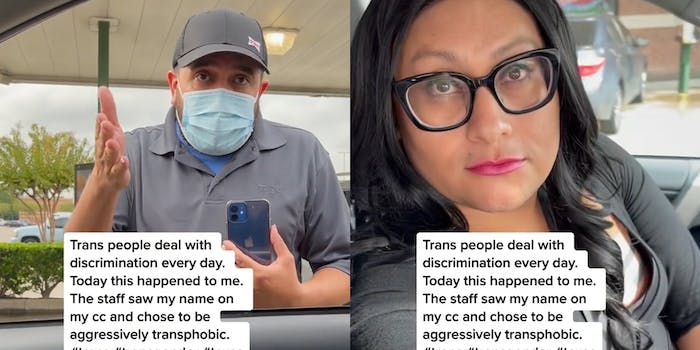 ‘I demand to be given respect when it comes to my gender identity’: Trans woman shares transphobic experience with Sonic manager in viral TikTok

The TikToker later said it's a 'learning opportunity.'

A recent viral video of a trans woman in a heated conversation with a Sonic employee sparked debate about gender identity and transphobia. With nearly 2 million views, TikToker @edentorres121’s documents their conversation.

From her car, Eden Torres, known as @edentorres121 on the app, is speaking to a Sonic employee through the passenger side window.

“Why does it matter?” she asks when the video starts.

The video is captioned, “Trans people deal with discrimination every day. Today this happened to me. The staff saw my name on my cc and chose to be aggressively transphobic.”

The employee asks, “So what are you so I can call you sir or ma’am?”

“What would you assume looking at me?” Torres responds.

These questions repeat back and forth before the Sonic employee answers, “I assume that you are a man.”

This is when Torres turns the camera to face her, displaying her pink lipstick, long hair, and cateye frames.

In a frustrated tone, Torres says, “Thank you. Whatever,” and drives away.

TikTokers showed support for Torres. One user stated, “He had no place asking her for her gender identity.”

Compassion outpoured, as many echoed the sentiments of another user who wrote, “I’m so sorry this happened to you.”

The two-part follow-up videos posted by Torres shows almost the entire interaction between her and the Sonic employee.

The first video opens with Torres saying, “[Y]our entire staff has been calling me sir.’”

The employee replies, “I’m sorry and I apologize for what happened. What else can I tell you, ma’am?”

The two have a conversation in which Torres explains that after seeing her dead name on the credit card, the staff began to misgender her.

They continued to go back and forth about the discriminatory aspect of referring to Torres as “sir” based on the credit card name.

“I’m so sorry that you feel discriminated, but we have employees here…that are gay,” says the employee.

The TikToker pointed out that she’s not discussing sexuality, but gender identity.

“I’m so sorry that you feel discriminated,” the employee says.

“It’s not that I ‘feel.’ It’s that I was discriminated against,” Torres responds.

The second follow up video opens with Torres asking the employee to stop discriminatory treatment of trans people at the store.

The employee asks if Torres’s name on her credit card is “feminine.” When she responds it’s not, he says, “They’re not discriminating you.”

A debate ensues about assuming someone’s gender identity and pronouns because of a credit card name. The rest of the video leads up to where the original viral video begins.

Responses to this video led to discussion about what transphobia looks like in society.

One TikToker wrote, “Trans woman here. I think the worker did the best he could, he made a mistake, but tried to correct it. Don’t ask someone to assume your gender, tell.”

In these videos, Torres expresses her wish that capturing these incidents could lead to productive conversations surrounding transgender identity.

As a result of the videos, Torres shares she’s receiving “transphobic rhetoric.”

Yet she remains optimistic. “I hope we can learn from this and realize that this is a learning opportunity,” she says. She encourages the Sonic corporation to train their employees on transgender identity.

She sends a very clear message that she does not want anyone fired from her experiences. “If we fire him, that doesn’t solve the problem,” Torres says. “I want a better life for transgender humans.”

When reached for comment, Torres said: “I demand to be given respect when it comes to my gender identity. I refuse to let a cisgender, heteronormative world dominate my existence. I and any other trans person fighting for trans liberation is doing so to make the world a more inclusive and equitable world for us. As my friend, Lola famously said, we aren’t working with a broken system, we are working with a system that was never in place for trans and gender expansive humans. I do not want this sonic manager fired. That would do no good. He would be transphobic the next place he worked. He deserves the chance to learn. I want all businesses to hire trans led orgs to teach their employees how to respect all humans.”

The Daily Dot reached out to Sonic via its press center for comment, but did not immediately hear back.

Update 1:07pm CT, Oct. 6: This article has been updated to accurately quote Torres’ comment that the Sonic manager “deserves the chance to learn.”