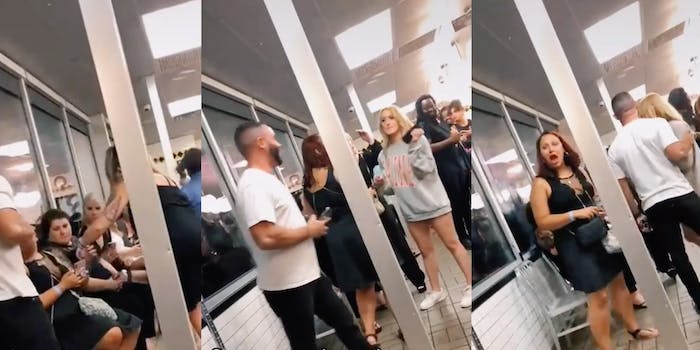 ‘You stole it!’: TikToker tracks phone only to find it in woman’s purse (updated)

The woman appears shocked that the phone is in her purse, saying, 'Weird!'

A viral TikTok video shows a TikToker tracking down her phone to a woman’s purse after she says it was taken at the club.

The video was posted by TikToker Abby Wood, @abbywood000, on Monday, and it has since been viewed more than 1.2 million times.

The video shows people from Wood’s group, along with Wood, approaching several women sitting in a row at a restaurant. “What’re you looking for?” asks someone from the group of Women.

The group of four women stand up and look around. One says: “Oh you’re looking for a phone.”

Wood hushes others so that they can hear the phone ring.

Wood takes the phone from the woman, and the woman appears shocked, saying “Weird!”

“You stole it!” says the person filming before laughing.

Viewers lauded the filmer for “loudly shaming” the woman and noted in the comments section that they would have “made a bigger scene.” “I would’ve popped her just cause,” one said.

Many also said they don’t buy the look of shock on the woman’s face. “Somehow, magically it ended in my purse,” one commenter quipped. “What kind of wizardry is this.”

“Was she really about to say that it ‘randomly got in her purse,’” another said.

According to the video’s caption, Wood isn’t pressing any charges.

When reached for comment, Wood told the Daily Dot she works as a bottle service girl at a club in Charleston, South Carolina, and often has to keep her phone on her for promotional purposes. She said she realized her phone was missing when she tried to contact her boss at the end of her shift. She said she used her laptop to track the phone.

“We didn’t initially know who had it, we just saw the location and acted fast,” she said. Her co-workers then helped her track down the group.