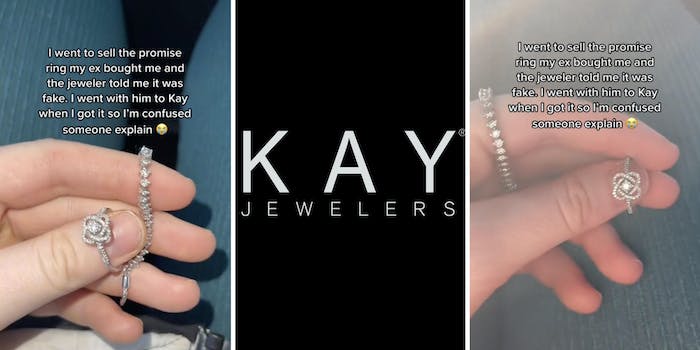 ‘I went with him to Kay when I got it so I’m confused’: TikToker says she tried selling ring her ex got for her—and the jeweler said it was fake

'SAME thing happened to me.'

A TikToker says she tried to sell the promise ring her ex bought her from Kay Jewelers, but the jeweler said it was fake.

“I went to sell the promise ring my ex bought me and the jeweler told me it was fake. I went with him to Kay when I got it so I’m confused, someone explain,” the user, @justpearlythings, wrote via text on the video.

The TikTok garnered over 2 million views and sparked controversy about Kay in the comments.

According to CBS News, several customers accused Kay Jewelers of using fake diamonds in 2016, which one user noted in the comments.

“Kay’s had a scandal maybe 4 or 5 years ago. they were selling cheap imitations and claiming they were real. get a 2nd opinion but they might be right,” they said.

Many users claimed to have the same experience as the creator.

“SAME thing happened to me with my ex fiance, I was at Kay when we bought it. went to sell it and was told it was worth MAYBE $50. Kay is trash,” one user said.

“The exact thing happened to me. It’s cause they’re man made diamonds,” said another.

The TikToker said in a comment that her ex paid $1,500 for both the ring and a bracelet, which caused some to question their authenticity.

“For both? That sounds like glass instead of a Diamond sorry girly,” one user said.

Others shared their own explanations for why the jewelry could be fake.

“Probably because he had it fitted for a gemstone first then probably was going to put in a diamond after the marriage,” one user said.

“This happened to me too with earrings. They have a case that is white gold but the diamonds are cubic zirconia but we weren’t told that,” another user said.

The Daily Dot reached out to user @justpearlythings via TikTok comment and Signet Jewelers, Kay’s parent company, via email.