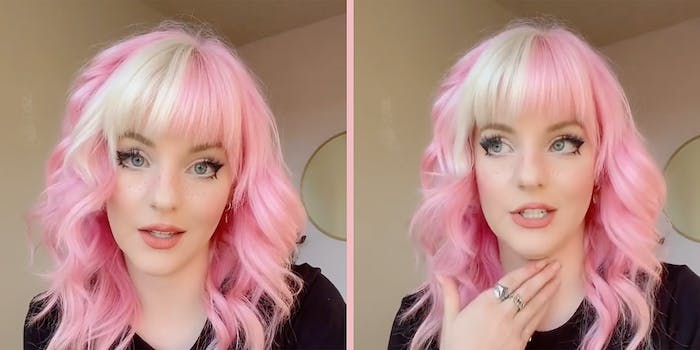 'They used the psych eval to find my pain and then exploited it for television.'

Influencer Heidi Mae is speaking out about the time her family appeared on the reality show Wife Swap, and she doesn’t have anything nice to say.

Heidi appeared on the sixth season of the show, which featured two families that switched wives for a set period of time, over a decade ago. She was 20 years old at the time and grew up performing in her family’s traveling theatre show, The Caboodlestoppers. Her mother and the other family’s mother traded places, with the idea that Heidi’s “clean-cut family” and the other “rule-free family of low-riders” being forced to swap moms would create high-tension reality TV drama.

“It was the worst mistake of our lives,” Heidi (@heidimaetrix) tells viewers on TikTok.

Prior to appearing on the show, she says everyone had to take a 700 question psychiatric evaluation and sit down with a psychologist face-to-face for an hour, supposedly to make sure those participating were “mentally sound enough” for the experience.

She alleges the fears and trauma she revealed in her psychological interview were fed to the “other mother” who came to live with her family and used against her to ramp up the drama.

“Growing up traveling full-time, I get really lonely sometimes, so when I feel alone, it makes me cry, it makes me really sad,” Heidi recalls telling the psychologist. “And I kid you not, the first, the first conversation with the ‘other mother,’ she … looks me dead in the fucking eyes and she says, ‘You are alone. Nobody cares about you. You have no friends. I don’t care about you.’ And I just fucking broke down.”

Heidi told the Daily Dot, however, that the “other mother” “was just as manipulated as we were.” “Before every scene the producer would take her into a back room and talk to her, then would she came out it would be a fight. It wasn’t until she broke the rule of never talking to us when they cameras stopped rolling that we found out the producers were telling her lies about my mom and what was happening to her family. They wanted her angry and they knew that triggering her protective nature would do the trick,” she said.

Heidi called it “ten days of pure hell.” “I regret ever having done it. To this day I still deal with the after effects of it,” she said.

The TikToker’s accusation—that the show “used the psych eval to find [her] pain and then exploited it for television”—is an accusation that’s been made against some reality shows over the years.

Wife Swap originally ran in the U.S. from 2004 to 2010 and has been revived several times. The show reportedly previously faced a lawsuit from a teen who appeared on the show and claimed producers “purposefully, intentionally and knowingly caused severe emotional and psychological harm” to her “for their own profit.” The suit was reportedly settled outside of court.

Heidi herself has talked vaguely about the negative experience she had on the show in the past, telling the Natural Aristocrat in 2019 that she “learned the hard way that reality TV is a story that the producers want to tell. And they will ‘accomplish’ that story by whatever means necessary.”

“I don’t think that I would do reality TV again,” she said at the time.

Although she has only posted one video about her experience to TikTok so far, Heidi has suggested she would be willing to talk about it further if there’s interest.

“Shit gets real rough,” she said.

The Daily Dot has reached out to a representative for the American Broadcasting Company, the network that originally hosted Wife Swap.

This post has been updated to include comments from Heidi.