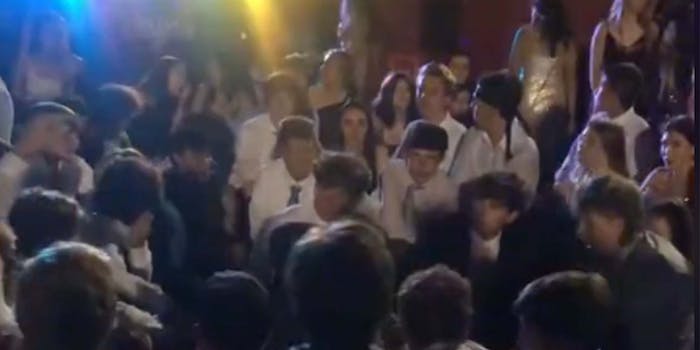 ‘So embarrassing for them’: TikTok shows white high schoolers kneeling during Mexican song at homecoming

TikTokers accused them of racism.

In a viral TikTok posted on Sunday, white high school students kneel in protest while the Mexican line dance song “Payaso del Rodeo” plays. User @syxm4, who posted the TikTok, said that the video was taken at Marist High School in Chicago.

“Marist High School in Illinois kneeling during a song in [Spanish] during homecoming,” @syxm4 wrote in the overlay text of the video. The user also included the hashtag #racism in the video’s caption.

In the comments of the video, @sxym4 wrote that “Marist is known to have a racist background and it is a predominantly white school” and that the kneeling students had booed the students who were dancing to the song.

“Kneeling is used to represent social and racial injustice and for them to use it because they didn’t want to hear it is ridiculous,” @sxym4 wrote in another comment.

Commenters on the video agreed with @sxym4’s sentiment.

“But kneel during the national anthem and they’ll start to cry,” wrote @heyyychi.

“[That’s] so embarrassing for them,” commented @crystal.licious.

“Just the fact that it’s a private Catholic school,” wrote @sara.h113, “Tells me there will be no consequences for them.”

“We must bring attention toward this act of racism,” @sxym4 commented. “Especially in a private catholic school.”

User @sxym4 did not immediately respond to the Daily Dot’s request for comment. The Daily Dot reached out to Marist High School via email.