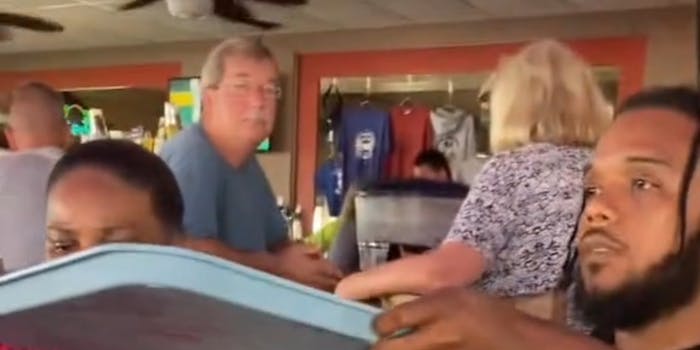 ‘They just don’t want to see us happy’: White man stares at Black family enjoying a meal in viral TikTok

'It's rude to stare'

A TikToker’s video has revealed what appears to be an all too common experience for many Black diners: a white man staring at them as they’re enjoying their meal.

The video was uploaded by user @jusdeuce on Friday and has since been viewed almost 400,000 times. It shows a Black family enjoying some food in an outdoor setting, sharing fries.

“When you’re Black, you’re never really lonely,” says the sound attached to the video. “Because there’ll always be a white person all up in your business.”

Behind them, a white man is seen sitting at the bar, turned sideways, his face towards the Black family, as he steals glances at them a few seconds apart. He is seated next to a woman, which the TikToker identified as his wife.

According to the caption of the video, the man did this for “2.5 hours straight.”

“His own wife couldn’t even get him to turn back around to face the bar,” the TikToker wrote in the video. “Watched us the whole time.”

From the comments section, it appeared that this is far too common an experience for many.

“I feel like some of them stare bc they can’t believe black ppl are free,” commented one TikToker.

“I’m telling you.. It’s bc they are shocked you can afford to occupy the same spaces,” wrote one user.

“Most old white people in wildwood are racist af bc they think that POC ruined Wildwood,” wrote one user.

The TikToker wrote in a comment that the incident took place in Wildwood, New Jersey. The Daily Dot has reached out to the user via TikTok and will update the report if they respond.

“I think it’s because they just don’t want to see us happy!” wrote another. “When they see us enjoying ourselves. They look and wonder how they can ruin it.”

Others shared how they handle similar experiences.

“I do the same to them,” wrote one user. “And I lock my car doors when they walk by.”

“I would have turn my chair towards him kept eating staring at him,” wrote another user.

A few others joked that maybe he wanted to pay for the meal.

“He just sitting side ways,” wrote another user. “Relax.”

One user pointed out that it may have been harmless and came from a place of admiration.

“Have you ever wondered maybe he’s just admiring your family?” they wrote. “Maybe he lost his kids or they left the house and its only them.”

The TikToker said they hadn’t considered it but others had suggested it as well, which he found “dope.” Still, not everyone was buying the wholesome assumption.

“I’m sorry, but no,” one skeptic said. “It’s rude to stare while sometimes [sic] eating… idc how much admiration you’re in.”