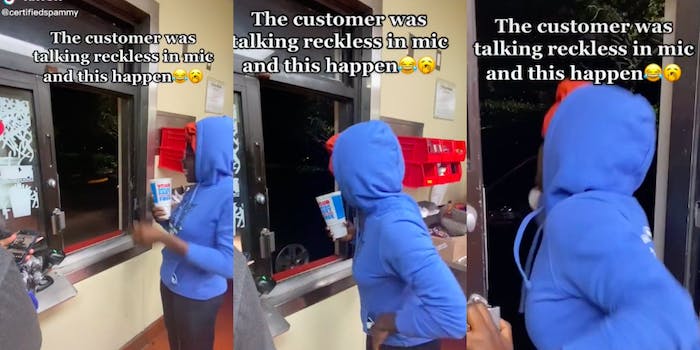 She says her manager was 'right behind' her.

A TikTok user recorded herself allegedly throwing a soda at a customer through a Wendy’s drive-thru window because they were rude to her.

The clip was posted by user @certifiedspammy on Monday and by Tuesday had amassed over 4 million views. In the video, which includes the hashtag #wendys, viewers first see the caption: “The customer was talking reckless in mic and this happen.” Then, a woman holding a large plastic cup waits inside the restaurant window for a car to drive up.

As the car comes into frame, the woman appears to throw the contents of the cup into the car.

Viewers can’t see what was actually thrown at the vehicle because the video cuts off right before the action happens. But the audience is clued in through the audio, which is a Cupcakke song overlaid with Cookie Lyon from Empire saying, “Tell me why I shouldn’t throw this drink in your bitch-ass face.”

The comments section was hungry for a follow-up and updates on whether or not the TikToker was fired. “GURLLL THEY FINNA FIRE YOUUU,” one comment said.

The TikToker posted a follow-up video replying to a comment asking if she was fired and recorded herself lip-syncing to “***Flawless” by Beyoncé. The caption says, “My manager was right behind me if y’all heard what the lady was saying in the mic, then y’all would understand why people be forgetting we human too.”

The Daily Dot reached out to Wendy’s and the TikToker.