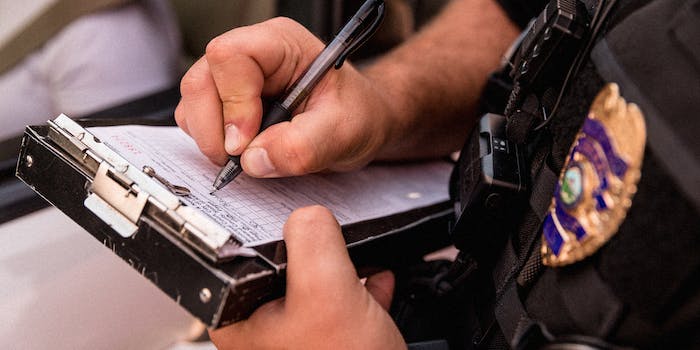 'I’m not gonna talk to you if you keep yelling at me.'

A series of TikTok videos have surfaced showing a police officer dismissing two women’s claims about a stalker, claiming the accused man was not “grabbing” or “following” the victim. When the women later requested to speak with another officer because he was not taking them seriously, the officer threatened to take one of them to jail.

TikTok user @iamisabellaskye, who goes only by Isabella on the app, shared a series of videos of the March 13 incident showing the assailant trying to enter her home as well as their conversation with the officer. (Isabella has requested her last name be withheld out of concern for her safety.)

According to an incident report obtained by the Daily Dot, officer Joseph Estrada was called on March 13. The Ring surveillance video showed Isabella at home during the incident, but her roommate and owner of the property told the Daily Dot that the stalker was after her.

That woman, who goes by Lady Godiva in her work as a dancer, requested her real name not be published for safety reasons.

She identified the attacker as a former neighbor whose family she had Easter dinner with last year. He has since been evicted from the property, she said.

Even though she was not home at the time of the March 13 incident, she said she was able to identify him later when he followed her home on Friday. She said as she was walking to her house from her car, she saw a figure walk toward her.

“I held my mace out, and I asked them to identify themselves, and that’s when he told me that it was him,” she said. She recognized him and asked why he was there since he no longer lives in the gated community.

“He was high on drugs, and then he was saying that he was the one that tried getting into my place two weeks ago,” she said. “He admitted it to me.”

She had not been able to identify him earlier from the Ring video.

In the Ring video from March 13, Isabella is seen hiding behind her main door, and the stalker is seen trying to open a sliding glass door next to it.

He then moves to the main door and knocks before returning to the sliding door and trying again to pry it open.

“I’m going to the police if you don’t leave, I’m calling them right now,” she responds.

“Alright, I sincerely apologize,” he says and adds that Isabella should tell her roommate that he was her “neighbor.”

In another video, Lady Godiva is seen speaking with an officer she identified only as officer Furby, who dismisses the idea that he is a stalker because he was “not following” her around and didn’t have the “intent” of a stalker.

The incident report noted one D. Furby was one of the responding officers, along with Estrada.

Lady Godiva commended Estrada for his professional conduct and said he addressed the issue with respect, unlike officer Furby.

“He came around the corner, it wasn’t like he followed you up,” says officer Furby in the video. “It’s like, he came from the corner.”

“It’s not stalking, it’s not following,” he added.

“If he like, pulled out grabbing her…” he continues. “I’m just trying to get to the aspect of the criminality of it. That’s all I’m saying. If he’d grabbed you, that would’ve been a different story.”

She corrects him and says she was the one he was following.

Furby appears to play-down the man’s “intent,” attributing it to the man potentially being intoxicated.

In another video, which Lady Godiva says took place Friday night after she was followed, she is seen talking to another officer, frustrated with his lack of action.

“At 1am, he’s hiding in the bushes, jumps out at her, scares the fuck out of her,” she says.

“I’m not gonna talk to you if you keep yelling at me,” says the officer, who has not been named.

“No, just don’t defend yourself,” Lady Godiva says. “Can we get another officer please?”

“Because you’re screaming at me,” he says.

She goes on to insinuate that he implied she was at fault because he’d allegedly asked her “why this happened.”

The officer explains he asked that to document the incident.

But Lady Godiva, an air force veteran and sex worker, told the Daily Dot that they were trying to victim-blame and were not taking her seriously because of her current profession.

The videos have collectively been viewed more than 1 million times, with the first video of the intruder receiving 1.2 million views alone.

Comments accused the police of “gaslighitng” and “mansplaining.”

Many were infuriated with the officer’s lack of action and shared experiences of women whose abusers are not held accountable until their actions result in death.

“So we have to wait till we are attacked before we’re justified in asking for help,” wrote one user.

“We have to die for them to be able to ‘help’” wrote one user.

“So he has to grab you before they are willing to help?????” wrote another one.

Many pointed out it was just one man protecting another man.

In an email to the Daily Dot, the Tampa Police Department denied that the officer implied “grabbing” would amount to stalking. Tampa police confirmed that yelling at an officer would not be sufficient cause for one to be jailed.

According to Florida state law, behavior “directed at a specific person which causes substantial emotional distress” to them falls under “stalking.” Tampa PD did not respond to further clarification about why this wasn’t cause for stalking given the circumstances.

Lady Godiva, out of fear for her safety, said she missed two weeks of work because she did not want to step out of her home. She also bought a shotgun, has installed further security systems in her home worth $400, and is planning on getting a Doberman for her safety that will cost her an additional $3,500.

She says she still remains lost about what the next steps. “I don’t know what I’m supposed to do here. No one’s given me any guidance, no one’s followed up with me.”