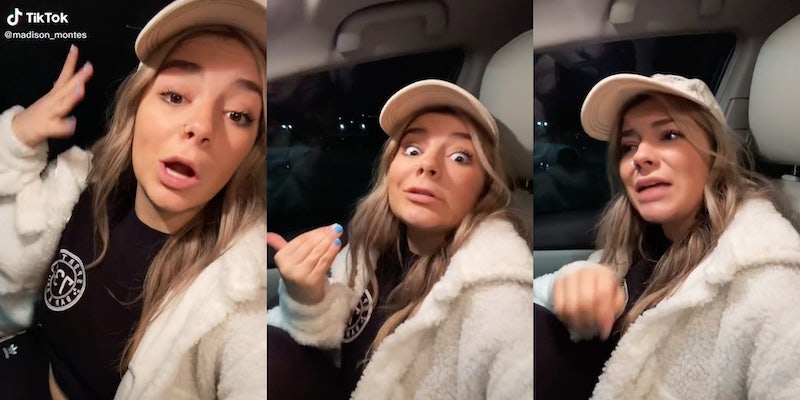 A restaurant server made a TikTok to vent about a customer who she says tipped her 18% then demanded a refund. The video went viral, reigniting the ongoing internet debate over whether diners should be required to tip their servers.

The server, Madi Montes (@madison_montes), has about 255,000 followers and frequently posts about her boyfriend and does TikTok challenges. Her video about the tip amassed about 334,000 views and 1,300 comments by Thursday.

Montes, who works at a local sports bar, said she was having a “great moment” with a couple dining at the bar until she brought them their check. After the couple paid, they asked for a printed receipt, which Montes said wasn’t normal at the bar.

“See our entire system is automated, so most people don’t get receipts,” Montes said. “This chick looks at me and she goes, ‘Um I didn’t order the gratuity.’ I’m like ‘Ma’am, that is my tip.'”

Montes said the woman from the couple looked her right in the eyes and said they didn’t want to leave her tip. She asked to see the manager. Montes’ face in the video showed how pissed off she was.

The TikToker said the couple’s check was $100 and added that she doesn’t make an hourly rate as a server. In a comment on her video, Montes clarified that she does make $2 per hour, but those wages ultimately go to taxes.

Montes said the woman told the manager that Montes “tricked” the couple into giving her money.

“I did not trick you. It is your fault that you hit the 18% button,” Montes yelled into her phone camera, addressing the woman as she continued the story.

She said the woman ended up leaving no tip and demanded a 25% discount on the food she already paid for, Montes said.

Viewers had a lot to say in the video’s comments, and some even took the diner’s side.

“You’re not entitled to a tip! LMAO,” one viewer commented.

“If people don’t want to leave a tip they don’t have to. and for you to call them out on social media is wrong,” another viewer said.

Other viewers came to Montes’ defense, saying that people who don’t tip shouldn’t eat at restaurants.

One user wrote all caps, “If you don’t want to tip DONT GO OUT.”

“Tipping is part of the dining out experience. If you’re too cheap to leave a tip, go to McDonalds. This is how servers make a living,” one commenter said.

“People who don’t tip should walk in servers shoes for a day,” another user added.